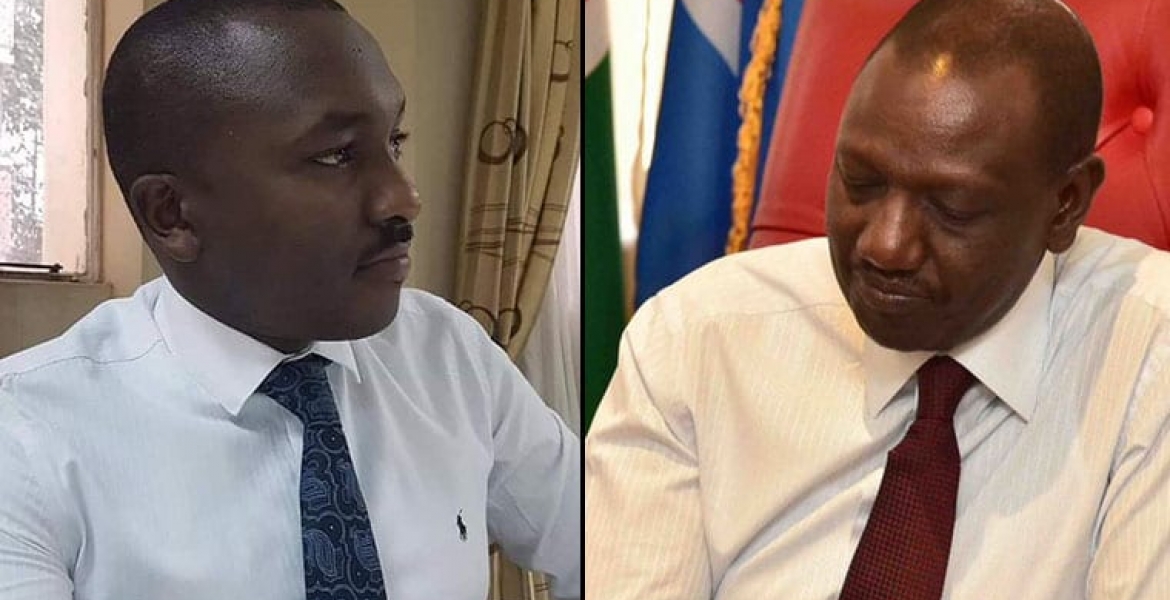 Kenei, a police officer attached to DP Ruto’s Harambee Annex office, was found dead at his house in Imara Daima, Nairobi on February 20th with a single gunshot wound on his head.

On Thursday, DCI head George Kinoti said the cold-blooded murder of Kenei was 100 percent connected to the Sh39 billion fake military equipment tender that was allegedly brokered at Harambee Annex by former Sports CS Rashid Echesa and his accomplices.

Kinoti said the murder of the 33-year-old officer was well planned in order to appear like he committed suicide. Kinoti added that the deceased was set to record a statement regarding the fake tender scam on the day he was discovered dead.

But in a post on his Twitter page on Friday, DP Ruto said the DCI should tell the country who killed the officer and the motive.

“The truth MUST be found on WHY, HOW, and WHO killed Sgt kenei. The family, ODP, and Kenyans want the TRUTH & JUSTICE and culprits held to account,” wrote Ruto.

He added: “The drama, distortions, convenient half-truths and the smear campaigns in sponsored headlines amounts to criminal cover up.”

In a statement on Thursday, DP Ruto described Echesa and his accomplices as “crooks and cartels” who breached security to access his office.

“The entry into the office of the Deputy President that was aided by some security officers was a breach of security,” the statement read in part.

Ruto is his worst enemy in every murky situation! Ruto seems to panic so quickly to a point he betrays himself in whatever crime he has personally sanctioned through his criminal proxies! He seems to offer some conflicting pieces of information which never fully adds up; and especially with the current sager with the murder of Kenei. Just imagine Ruto telling the DCI to tell Kenyans who killed Kenei; just imagine.........!!!

It is not about who killed Kenei, it is about Ruto telling Kenyans why his guard, and a close confidant to Ruto, was killed in cold blood! Kenei oversaw security matters in most of Ruto homes to include Sugoi.

The guard was more than a cop; he was a personal friend to Ruto. Kenei had deeply guarded secrets pertaining to Ruto’s personal affairs which caused uncharacteristic panic in the higher circles in Ruto’s Harambee House office. Kenei managed the arms scam with Echesa for a higher Co-partner in the arms sales.

Ruto is now creating some “drama” with the DCI so he can overshadow the murder investigations of his dead guard, Kenei. It is about the time the cover is blown on crimes of passion that closely touches the DP Ruto.

The riots in Muranga today where Ruto was visiting is an extension of Ruto’s drama to cover up the Kenei investigations by shifting temporary attention into politics.

Kenyans must not be swayed to forget Kenei was mercilessly murdered in cold blood to cover up a crime! Kenei’s family needs answers and must get justice in the murder of their beloved son!

You seem to be at pains even more than Keneis parents!
Ruto was at the burial of the fallen officer and no other official from the “ kinoti and the clandestine “ attended.
The DCI is playing Russian roulette with this investigation. He is showing us videos and letters that are no secret. All those are obvious! He is supposed to tell us some detective work not just tv PR.
He is supposed to tell us who shipped the two white crooks out of the country and why.
Btw the fracas in Muranga was instigated by the governor chest walking into the meeting with his goons shouting provocatively. Has nothing to do with Ruto but has everything to do with their avocado business!
This is a scheme orchestrated by the enemies of the presidential growing star. And the DCI knows the inside workings of it.

Jesus was crucified, died and was buried in the Tomb so that mankind can be saved!

But Judas was cursed by God because he betrayed Jesus! Judas was Jesus’s treasurer and had been stealing from Jesus’ Ministry and so he fell in love with stealing money from the offering Busket, which led him to sanction the murder of Jesus through betrayal.

You know, Judas died before Jesus resurrected and ascended to Heaven to be with the Father, while Judas committed suicide and went straight to hell.

Had Judas not died before all the tribulations that Jesus went through, I am sure he would have attempted to go to see Jesus in the Tomb to hide the guilt of betraying Jesus!

NB: Hitler pretended to sympathize with the Holocaust Jews after he had personally incarcerated them in various Camps in Germany. Many Jews died because of Hitler!

So, a murderer can attend a murdered victim’s burial to hide the guilt! Do not be easily deceived by what you see with your naked eyes!

Crooks will always be crooks throwing each other under the bus. This Tangatanga Echesa who has been DP henchman is out in the cold and DP who should be helping with this investigation is hiding behind the keyboard.
Kudos to Kinoti for a job well done! Msando, Jacob Juma cases should be opened.

DP Ruto and Sergeant Kenei look like blood brothers from the same mother! Is this the case of Abel and Cain in the Bible? Only Ruto knows!

This cop was undercover for a looong time .. his mission was to impersonate Ruto so that Ruto can be implicated in criminal activity e.g the fake weapons scandal .... When this cop refused to complete his mission, the state had to take him out. Ruto will be impeached soon via such a set-up if this particular one doesnt work ... WAJINGA SISI