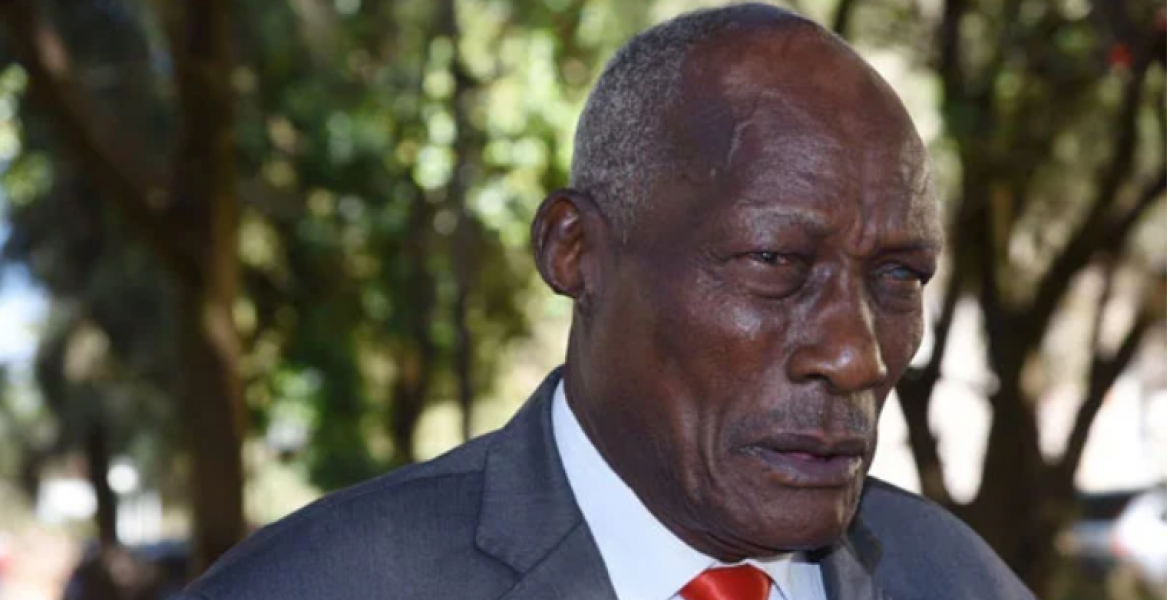 The court has ruled in favor of controversial Kenyan tycoon Mzee Jackson Kibor in a case in which he was fighting with his six sons over a 1,250-acre parcel of land in Eldoret.

Kibor filed the case in 2016 seeking to block the transfer of the property to his sons citing an unsettled family dispute over ownership of the parcel.

His sons; Elkana Kipleting, Evans Kipkosgei, Eric Kipchumba, Raymond Kibitok, and Edwin Kipkoech laid claim to the land, saying they were bequeathed by their father.

Justice Antony Ombwayo on Monday, May 18th, ruled that Kibor, 86, was the rightful owner of the land located in Soy Constituency and ordered the sons to vacate within 150 days.

The court further also allowed Kibor, a former farmer-cum-politician, to subject the six sons to a DNA test before sharing the land to them. He maintained that he never married the children’s mother and doubts whether they are his sons.

Kibor grabbed headlines in 2017 and 2018 after he divorced his two wives Naomi Jeptoo and Josphine Jepkoech, who he was married to for more than 40 years. In both cases, he accused the wives of deserting their matrimonial home and mistreating him.

These grown up men are awful! How can you start inheriting a man while he is still alive!

Those names were all unfamiliar except that one name mentioned as William S. Ruto! Is that Ruto the DP Ruto? Mzee Kobia you got your hands full!

Sons fighting for Property, when the Father is still alive. Does that sound familiar? It is Disrespectful. Kibor should be allowed to leave his Property to whomever he chooses. After all, he acquired it himself. At least in Mt Kenya, they fight when the Patriarch is already gone. Kibor's children are fighting for his property, when he is still alive, just as Ruto is fighting to be the next president, when Uhuru is still in Office. Both Kibor and Uhuru are being disrespected. Or rather, they are being shown disrespect. Justice has a way of working, without being pushed. You just follow the simple, everyday rules. So Kibor, wait for the DNA results, and act, when they come... and Uhuru, wait for politics to play out. Just be confident with what you believe in, regardless of popular opinion. I believe Mt Kenya was Ruto's for the taking, because of the Goodwill he enjoyed there. But people don't know how treat him, after his Acolytes, like Alice Wahome and Bahati MP Kimani Ngunjuri, insult the President, on behalf of Ruto. In a Political Marriage, a Wife cannot take a different position from the Husband. The Marriage stands dissolved, de facto, or de jure, when the Wife takes a different position. Time solves all Problems. I will wait to know who are Kibor's real Wife and Children, and where is Uhuru's real Political Marriage. The die is Caste.

Arap mashamba is behind all this that simba mzee kibor is facing.
he should disinherit those foolish sons who are being used to finish him & his hard earned property.
His best bet is his youngest wife and her kids period.
The tangatangaring foolish sons have already sold many prime properties including Karen & nyali. They are cursed n I hope it's not their mothers who are inciting them against mzee. Kibor ni simba. Long live Jack Kibor.

Mzee Jackson Kibor has always catered and raised his Children with class. He enrolled them in the best schools and was always active Parent in their studies. Whatever has besieged the family is really mind boggling.
Sounds like the named Children must have angered Mzee Kibor vibaya. Kibor loved his kids.Period. They probably didnt take advice well knowing they had immense wealth. Its sad, Its worse they have to take a DNA test out of total bitterness.
I'd advice those kids to beg for forgiveness...the prodigal son way. Stop stressing out the man. Shower him with support and love.
If they think the old man is crazy..well just suck it up. He's got nothing to lose!

@soket - Asante ya panda ni mateke!!! Kibir should disinherit them all, and then write a living WILL to be deposited at DP Ruto’s house! These hiho, hiho, hihooo sons must never inherit the old man! He raised them with class, kindness and dignity! Now he has gotten old, they are like hyenas eating him alive! Does MP Sudi and a Murkomen know Kibiru? I bet they do and they are now working with the rouge sons to acquire the land for master Ruto for a minor fraction under the table! Wow, the devil is a big liar and Kibiru should not give these hungry sons anything after what they have put him through!

Prepare yourself for a future that somehow you may not be around to say your wishes! Now is the time! And my humble advice to you is not only to get the DNA samples to determine paternity, but to also disinherit these so called “your sons” and curse them in many traditional terms!

They are useless to you, and can even have you killed! Mark my words, your sons are driven by e I’ll motives and they have nothing good in store for you!

Your other illegitimate son, Ruto, is watching and he wants to have a little bit or everything you got! Protect yourself as I can see you are well endowed in your mental faculties!

Soket, just want you to remember one thing. "...whatever has besieged the family is mind boggling." Its not mind-boggling, Sir. Its pay back time. Its history repeating itself. Its "what goes round comes around". Its the sins of the past that comes hitting hard in revenge: God's wrath. Mzee Kibor was one of the many 2007/2008 Kalenjin warlord and leuvtenant that decimated a section of Kenyans. He is the same warlord who emitted fire of hate during the so called ethnic clashes of 1988, 1992, 1998, 2002, 2007/2008 under Moi's blessings. His other generals were Biwott, Ntimama, Cheruiyot, Boinet, Kamotho, Kamangara, Chotara, Tipis, Salat, Chelule, Lotondo, Kones, Labosos, and others. They all slow painful death. Hakuna malipo binguni. Unanyoroswa hapa hapa duniani na kupaa mbinguni ukiwa msafi kama pamba.

@mujuaji - Is that so???? Now I want all his land, cars, kids and wives to myself!!! I need the over 1200 acres of land all to myself, maybe I will 1 acre to DP Ruto to shut his mouth while I deal with the old punk! These folks my foot killed many innocent people! My uncle told me that Chotara was custratinf those who disagreed with Moi with a blunt panga!!! That group of rudimentary folks is about gone! And may Kobir hurry up and go so I can take over the land!!! Sorry a$shole!!!

This very old man says he has 21 children. He couldn’t stay off the bed humping different women! And no wonder the children are fighting to grab whatever they can before he dies!

Maybe the 4 prodigal sons got the mean attitude from you! You have orchestrated the killing of other people and have you ever thought you could be paying back your past evil deeds?