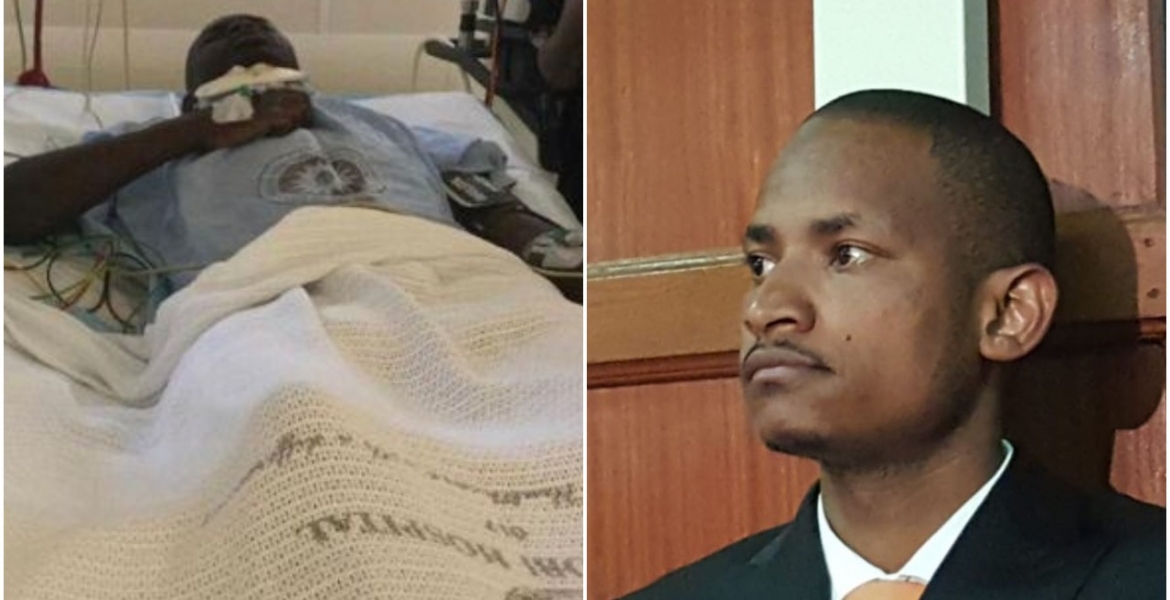 John Orinda, the father to Felix Orinda, alias DJ Evolve, who was shot and wounded by Embakasi East MP Babu Owino in January has dismissed reports that his son was discharged from the Nairobi Hospital last week.

In an interview with Milele FM’s Jalang’o, John indicated that his son is still admitted at the hospital and dismissed claims by MP Owino that he cleared his medical bill amounting to Sh15 million.

“He is still in hospital and as we speak, I’m in the ward with him. The bill is still too high. Babu paid only Sh5 million of the Sh16 million bill,” he said.

He added: “He has been moved to the general ward, but he can’t sit. His upper body is okay, his hands can move, he can talk, but he has a pipe in the esophagus to pass out mucus. So he can’t talk when it’s inside. His legs are still unresponsive.”

Orinda was admitted to the hospital in critical condition after he was shot on the neck by MP Owino at B-Club in Nairobi’s Kilimania area on January 17th.

A post uploaded on DJ Evolve’s Instagram account last week stated: “Still have a long way to go but I’ll be back…thank you all for the well wishes💯.”

B-Club, where he works, responded by saying: “Welcome back home king @dj_evolve (lowkey assasin), we can’t wait to dance to your vibe once this lockdown is over.”

But John said his son did not write the post on his Instagram page but confirmed he had been moved from the Intensive Care Unit (ICU) to the general ward.

MP Babu in an interview on April 30th claimed he fully paid Orinda’s hospital bill amounting to Sh15 million, adding that his friendship with the DJ was not affected by the shooting incident.

“The thing that happened is between me and God and I chose to forgive myself. I have been paying the bills and I settled them, Sh15 million. DJ Evolve is waiting to go home as he was discharged from the Intensive Care Unit to the wards. He cannot go home yet due to the Coronavirus pandemic,” said Owino.

Owino was arrested and arraigned in court following the shooting incident that left Orinda fighting for his life.

He pleaded not guilty to charges of attempted murder and disorderly behavior while carrying a firearm and was freed on a cash bail of Sh5 million.

Come on Babu!!! Stop lying adding grief and pain to the family you deliberately destroyed! They son has gone through hell because of your callous actions. Go back to the hospital and pay the freaking 16 million shillings hospital bill! You ought to be deeply ashamed of yourself fool!! You do one good thing then you turn around and do a million bad things you dummy! What a sorry kind of human being are you!?

Thank you Jalang'o for exposing this politician Owino for exactly who he is, a scumbag, a liar who still deserves to go to jail. Politicians have always lied but in this age of social media their lies are short lived.

No amount of money can pay the damage caused by this man babu. I feel the suffering this family is going through.