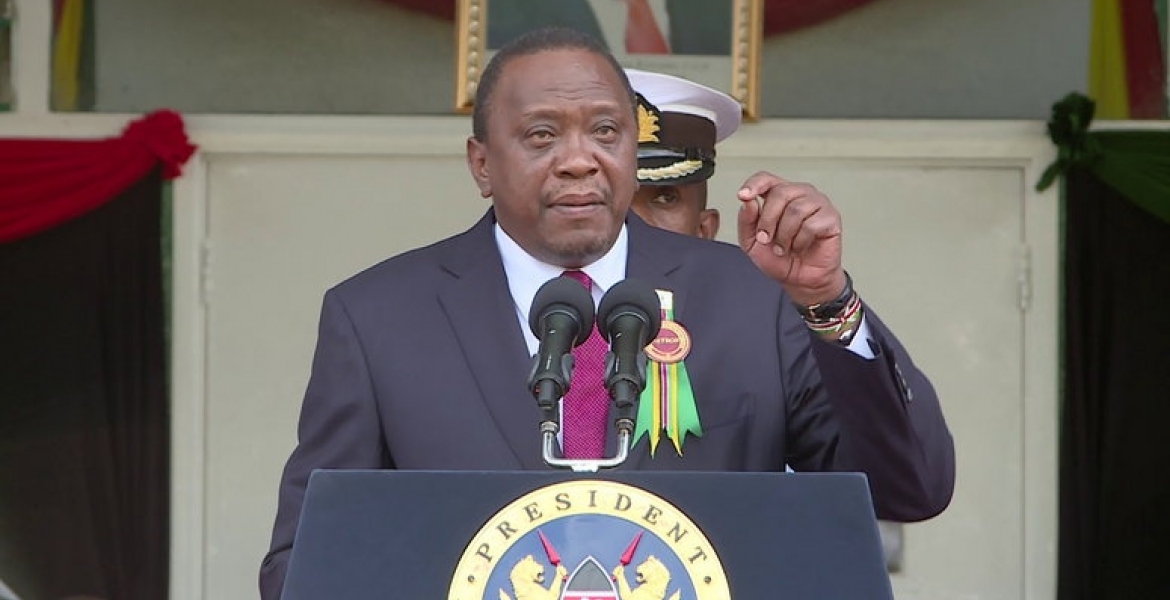 President Kenyatta has given all indications that the country could soon be headed for a referendum to introduce changes to the 2010 constitution.

In his speech during the 57th Madaraka Day celebrations at State House on Monday, Kenyatta said there is a need to improve the constitution if the country is to get rid of divisive elections every five years.

"...It is not a moment to replace it but to improve it. A moment that will correct what we did not get right in 2010," Uhuru quipped.

He added: "We need one that will bring an end to cycles of violence that we have witnessed since 1992. One that will deepen our democratic credentials and lead to an inclusive society."

The late Kenyan politician Tom Mboya, according to Uhuru, warned the nation against Constitutional rigidity. "If we have done great things. We must not be afraid to change the system if it does not help us do this," he said. "He [Tom Mboya] argued that a Constitution cannot be useful to a country if it is an end to itself. A good Constitution must be responsive to the aspirations of a nation and be a means to a greater end."

In an interview last week, ODM leader Raila Odinga said the quest for a referendum through the Building Bridges Initiative (BBI) was still on, adding that the vote could be held before the end of this year.

On his part, Deputy President William Ruto assured Kenyatta of his support in the fight against the Covid-19 pandemic.

“With your intervention as you mobilize govt to provide guidelines, every Kenyan across of this nation is now part of the big army in trying to deal with COVID-19 pandemic. We are confident, the Kenyan government will take necessary decisions,” said Ruto.

This was Ruto’s first appearance this year at a State function held by Uhuru.

I am sorry but that is an argument of a lunatic.You cannot quote a line to justify stupid.When/how did Kenyans tell you that the 2010 constitution does not work? What can be put in a constitution to guarantee that a mad man accepts results of an election? Pray , what happens if the loser in 2021 decides not to accept defeat? Another hand shake? Change the law again? How many posts can you have at the top to "please your demonic entitled princes?" What became of devolution that was to give communities "ownership of tribal leadership? some have even built white Houses".Uhuru is the worst corona to visit our land.His tactics are so childish that those of us who worked so hard for him cry for a paper to puke in!This juvenile is planting seeds of distrust that will eat and burn Kenya in a way never seen.Going forward thanks to him any political grouping formed will ensure that if one betrays the other there will be hell to pay- in short no goodwill/trust/nationalism will ever drive politics.No person should be allowed to hold a country hostage until they win! The players uhuru now lines up as "saviours" have been in government since i was in primary school.What can they offer our modern economy other than being worshiped and projecting power when they should be retired and contributing as senior citizens?
How can a retiring president tell us that the constitution that he has used on the backs of all those who supported him does not work? If there is any change, then it must not apply to 2021 election! Just because a fool has been used to "test" the 2010 law does not invalidate it- he is dummy and should be treated as such. Let us have a real person serve under the same so we have actual data.Should he think he can "designate himself essential" to try beyond 2021 history will never forgive him.You have failed our land in ways never imagined.Lord have mercy on your soul if you have any.

All recurrent leaders should get out of politics resign and retire. Uhuru, Ruto, Raila, Mudavadi etc should all get out and five room to new faces. Ruto ameiba too much too often and open. RAO and others have stolen too but when UK advised them to stop, Ruto did not. They are all busy stealing funds that UK is busy borrowing from outside. That is the problem and specifically why UK and Ruto are not seeing eye to eye.

I don't see a single cogent argument here for a referendum. All I see are excuses.

No referendum. We have not even implemented 2010 constitution. Uhuru go home when your term is over.

Every time this Lunatic/drunkard talks I feel like taking a dump! After your term, pack and disappear moron! 3 looting families(Kenyatta, Moi & Odinga's) families CANNOT control a population of 45M! Wajinga nyinyi!!!!!!!!!