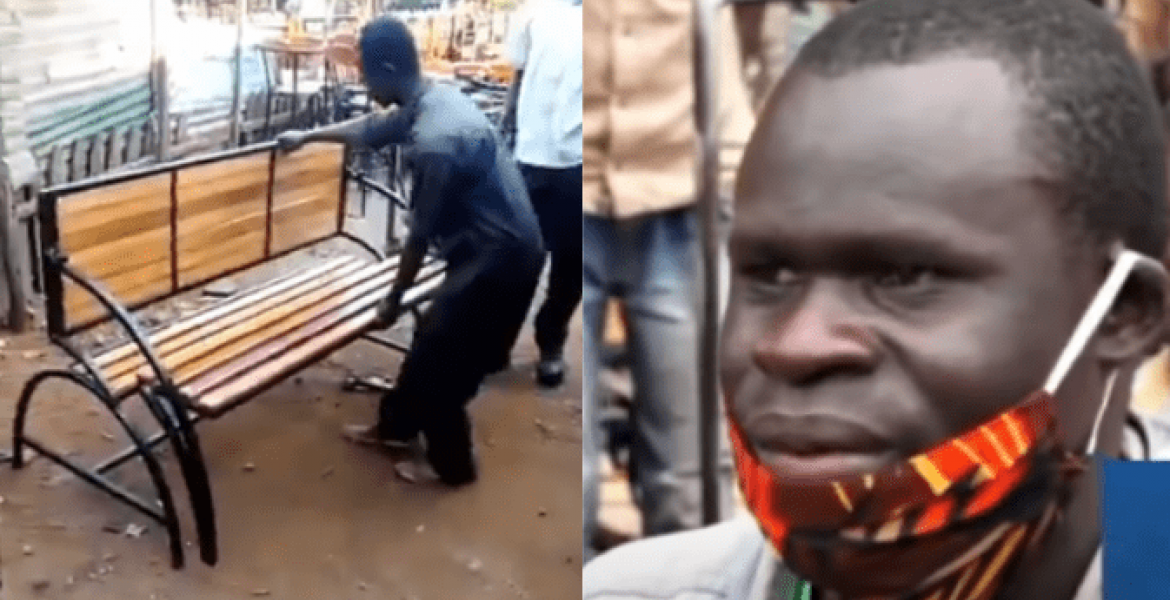 A Kenyan jua kali artisan who made a unique multipurpose garden bench is set to become a millionaire after he received multiple orders.

Stephen Odhiambo, an artisan operating along Ngong’ Road in Nairobi says he has so far received over 700 orders after a video of the convertible bench emerged on social media.

The video went viral after it was first shared online by Mohammed Hersi, the Chairman of Kenya Tourism Federation.

This country has talent. pic.twitter.com/Y3KGi8odS0

The bench accommodates three persons but when unfolded, it takes up to six people facing each other with a table between them. Odhiambo said he has been busy on his phone receiving orders from people since the video made to the internet last week.

The seat costs Sh22,000, meaning he will earn more than Sh15 million if he manages to deliver the 700 orders. He admits it will not be easy to honor all the orders given that his team of artisans is only able to make five such benches in a day.

Odhiambo and his team have urged the government to factor in the jua kali sector in the funds set aside to cushion different sectors from the effects of the Covid-19 pandemic.

He should Trademark his Invention as Quickly as possible.

Good and very creative innovation. The government is supposed to be supporting such talents to eliminate poverty. Kenyans are very talented and full of ideas but have no capital. Hope some Big Wigs are not planning to steal Odhiambo's idea like they always do and leave him hanging. Someone please advise him to get a PATENT for his product URGENTLY before it's taken off his hands.

Simple and but Genius; bravo!

The power of social media. Thanks to Mr.Mohammed for highlighting this jua kali talent. Where is our government to support such talented minds that are languishing in poverty??

Please help such hardworking,innovative people. Hope we have a ministry which can help so he is not ripped off. Get them to register the patent faster, faster. Hongera! kwake.

I have always said kenya or Africa has plenty jobs if pple can use their brains n think outside the box.Sasa huyu jamaa ako mbele sana.Hata watu wamajuu cannot make such cash that quick.Bravo bravo odhis.

Yes, he needs to trademark his invention before the chinese and other Kenyans a steal it. Pongezi

It's been done before, quick search on youtube will show you many other people have been doing it
https://youtu.be/w3_aR9pFVWE

When I saw it I felt the same too. This has been invented before, but Kudos to him coz he implemented and made money, everyone copies. There is nothing real in America too

Yes it has been done before....but good for him someone spotted it and he made his money...that is the bottom line

Bravo and congrats to him and his crew. Thanks to you all and your suggestions too.
Let's take it further instead of just posting here on what he's supposed to do.
Get in touch and advice him on trade mark. Also advice him on good financial planning, savings and investments. Otherwise down the road, we'll all be condemning him on misused lost fortunes.

He needs an honest lawyer quickly trademark and patent it quickly.

He needs to trademark it ASAP!!!!

Hire more people and let the ones that you have working for you already train the new staff and please listen to Philly...If this is your idea or it's never been done before..TRADEMARK IT ASAP!!!

Good for him thousands of ideas from YouTube originally Russian.

This is so lovely big ups Odhiamba I love quality work. I need to place my orders am based in Entebbe UG kindly need your contacts. 👍👍

People, the protection he needs is a 'Patent' and not 'Trademark'. These two are different and since his is an invention, then it's Patent. Trademarks are for logos or unique symbol to identify a business. E.g. Coca-Cola😀

See what Ndindi Nyoro said, Luos are good hardworking people BUT they will need their freedom and chains of bondage from Odingaism/ Mganga. For real Raila has taken advantage of this people and it make me mad how this this learned educated human follow this man and can't even feed them during this time of Covid and yet come election he will use them and they will all go and uproot railline and destroy anything and everything. BUT l truelly understand their frastrution but they ought to know even kikuyus no one give them things for free we work hard because l can tell you l do not think Uhuru had ever fed my family. So can we all get along and Lous to set them free unless Raila "kuronga" yaani bewitched the Lous people. I am glad Luhyas have broken the chains of bondage from Mganga and Luyhas time .. yeahhhhh and it everyone times.. Freedom from them leaders who have been taking advantage of poor people... Me for Governor of Kiambuuuuu..

Where can I order one?

Good concept. Am based in DRC I want his contact. Thanks