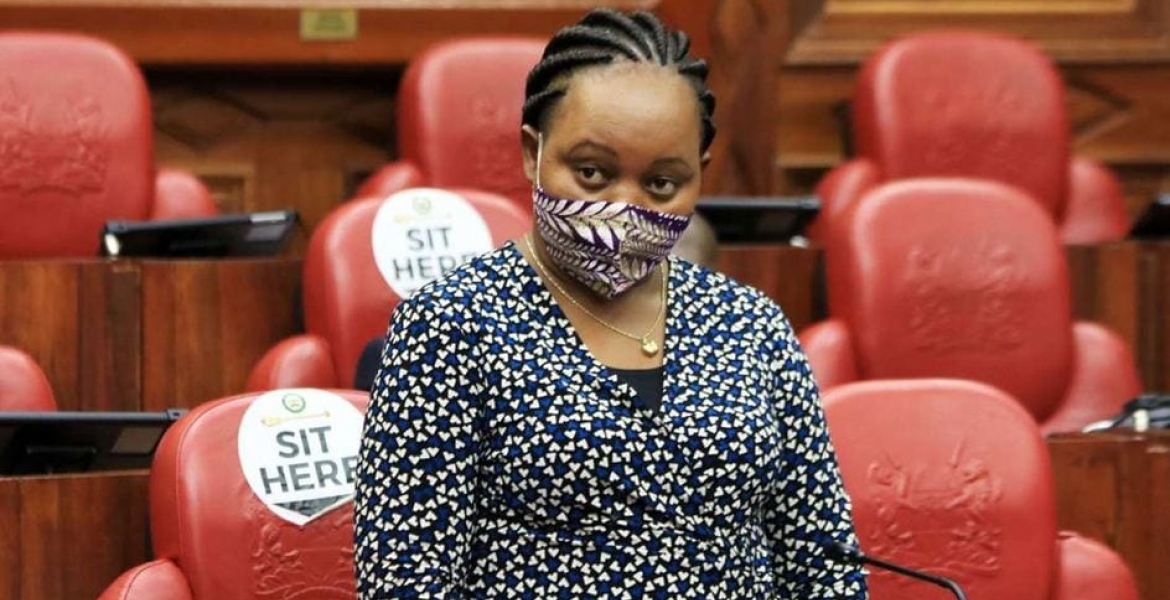 Embattled Kirinyaga Governor Anne Waiguru was on Tuesday pictured playing a game on her phone as hearing for her impeachment was going on before a Senate Committee.

Photos shared by The Star showed Waiguru glued on her smartphone playing Solitaire, a genre of card games that can be played by a single player. 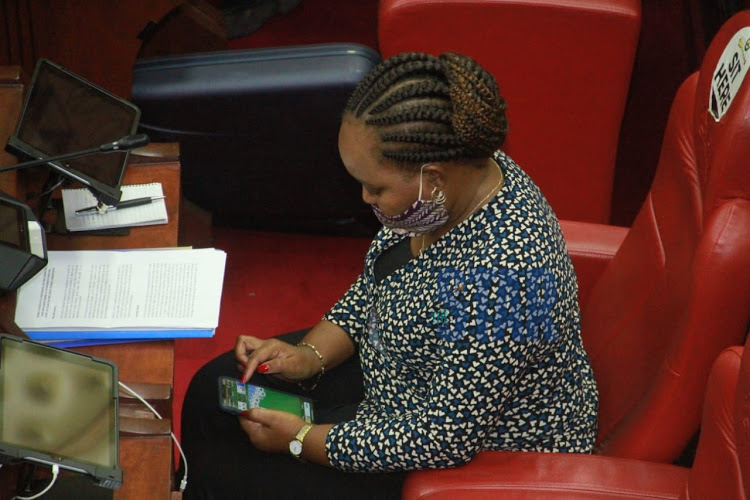 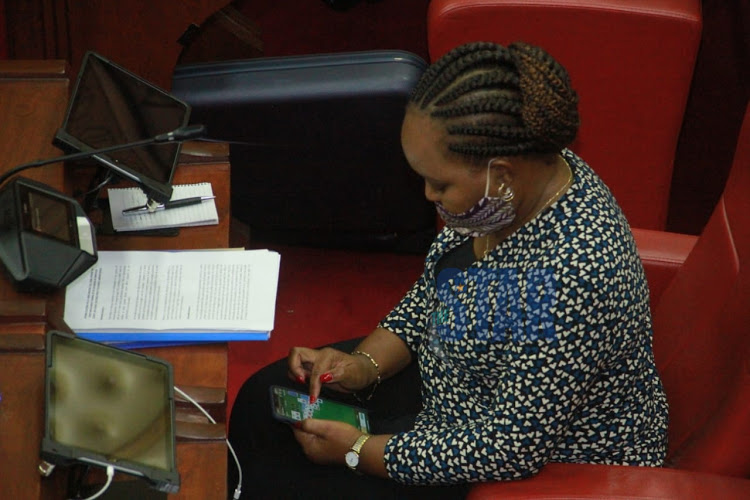 Addressing the committee earlier, Waiguru termed her impeachment as unfortunate, saying it was sponsored by people who are keen to settle political scores.

“Impeachment and removal from office was never intended, and should never be based on falsities, innuendo, rumor, hearsay, conjecture, and certainly not malice,” Waiguru stated.

Waiguru’s fate lies with the 11-member Senate Committee that was tasked to hear and investigate her impeachment. The team has until June 25th to table a report of its findings in the house.

23 out of 33 Kirinyaga MCAs on June 9th voted in support of the motion to remove Governor Waiguru, four abstained while six were absent.

The motion was filed by Mutira Ward MCA David Kinyua Wangui, who cited gross misconduct, abuse of office, and gross violation of the constitution as the main grounds for Waiguru’s removal.

When you are sweetie to the mighty and powerful . You know you cannot be shaken. That is very disrespectful and rude.

She has no shame because Kikuyus support thieves.

She knows she has the blessings of All Kikuyus.

It’s part of kikuyu culture to support thieves. They have no shame.

Those who are impeaching her are not Kikuyus.

This is why we want secession.

Clearly shows how unlearned and stupid you are. With the current storm of racism that’s brewing you go ahead and post non-sense. We blacks are our own worst enemies and change needs to come from in within. Stop this tribalism and let people work for change as one.

Ann Waiguru is a thief.

Kalejin are number one thieves in Kenya - for example DP Rory steals everything which his crooked hands can grab! The list of Kale thieves is quite insurmountable.

Yo, stop using general terminology. I cannot wait for your generation of tribalists to die off asshole

This the same guy issuing death threats to people every where by just changing from Guest to Guesty, Guest1, etc! A kalenjin tainted with the blood of all the Kikuyus he killed in 2007/8, before then and still he continues to bay for the blood of others!!! Any Kale of sound mind must speak out.

Blacks are criminals. By your tribalistic sentiments can be extended to race etc. you are living in the 21st. Watch your language you old relic. Say she is a thirty lot the whole tribe

Watched the season and clearly she has a strong case. The MCAs did not do a good job filing their case in the senate - no facts. Lawyers Nyamodi, Waigonjo and Karani made the MCAs case look like a waste of the Senate time. Waiguru will survive.

Kirinyaga elected , by 54%, a world renowned thief.
Choices have consequences.

She knows Junet Mohammed ( the man who will sell Raila Odinga for ksh 10 Million) and Uhuru Kenyatta ( famous thief from Gatundu) don’t care about the kirinyaga.

Kikuyus generally support thieves, I don’t understand why they are impeaching a thief.

This @guesty will be butchering Kikuyus come 2022 with a full sponsorship from Tanga Tanga and Ruto. I ask the Kikuyus to start loading up and stay prepared for idiots like this will surely come out to kill with vengeance! Keep in mind Ruto was just about to buy shs 400 billion of weaponry through Enchasa! We all need to load up to confront DP Ruto wave of killers! Be ready guys!! Be ready!! Tell us about the thief in your hood called DO Ruto @fake guesty!

@guesty...mind your language against catigating certain communities as thieves.No one steals as a community but as an individual.Understand that and have your writs get polished like someone who is positive minded without hate.

Guesty, my God i must say ur truly an idiot n its people like u that bring ur country backwards. Ur hate for Kikuyu people will not take u anywhere. We r all Kenyans under one Flag. It is so sad that lots of Kikuyus and Luos are still caught up in tribalism while we should stay woke, join forces as Kenyans n kick all this corrupt individuals to hell.

Let’s be honest.
Kikuyus are thieves and they are proud of it.

The stealing culture was instilled by Jomo a Kenyatta.

The founding fathers of thieves, looters of public funds and landgrabbers in kenya.

Your thinking is holding is back. I’m kikuyu and never been spoiled. Screw off you tribalistic relic. You cannot generalize.

Waiguru produced fotos to confirm she traveled abroad . fotos can be photos shoped
She has to produce her flight tickets and the payment evidence ( receipts) accommodation invoice and receipts of the same. Unfortunately everyone has a pricei in kenya yetu wa shillingi mbili