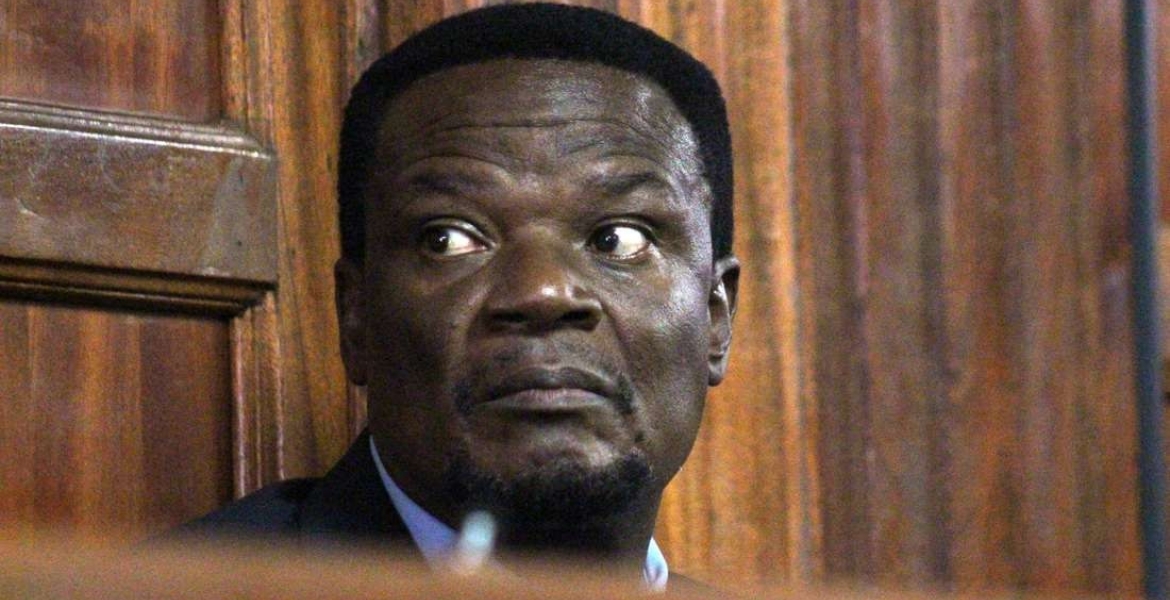 Sirisia MP John Waluke’s wife has angered Kenyans on social media after she sent an appeal to the public to help the family raise the Sh727 million fine slapped on her husband by the court.

Waluke was handed the hefty fine by Chief Magistrate Elizabeth Juma on Thursday after he was found guilty of defrauding the National Cereals and Produce Board (NCPB) of Sh300 million.

He was sentenced alongside his co-accused Grace Wakhungu who was fined Sh707 million. The two will serve a jail term of seven years each if they fail to pay the fines.

To save her husband from going to jail, Waluke’s second wife Roselyn has pleaded with well-wishers to help the family raise the amount.

“You are aware of our problem and I thank those who have stood with us during this challenging time and kindly continue praying for us.”

“We are requesting for your financial assistance. Kindly channel your financial support to my number 0728732542 as we wait for an M-Pesa Paybill number,” she appealed as quoted by People Daily.

Her appeal was not received well by online users who have vowed not to contribute anything, saying Waluke should pay for his own sins.

“Did she tell us that her husband suddenly had money she couldn't tell where he got it from??  What you do in secret shall be made public!" noted NyarMkamba

Wow! Mp Waluke manages two wives while Some mothers are cooking stones and other poisonous leaves for their ofspings. He stole over 300m and was caught. How much had he stolen before?

Their children are swimming in money while ours are dying frm kwashiakor and malasmus They stole our money and spent it alone. What an insult here. Sell your stolen properties across Kenya including your posh cars and cosy homes to pay my money back...Thieves. Surely you must be sick btwn your ears or a thief to send 5 cents to these Corrupt Citizens.

This woman is a good example of how Crazy and Adulterated Omulembe people are stupid and COVIDIots to boot.
Anyway:
Where is @Maxiley to Defend and Contribute for his peoples "good cause" or Bad course?

The Agīkūyūs steal with style unlike this foolish Wakule whose wife is even more foolish. In gīküyū we would call her "ndongomothi" meaning completely unredeemable even with spiritual intervention.

The Agīkūyūs steal with style unlike this foolish Wakule whose wife is even more foolish. In gīküyū we would call her "ndongomothi" meaning completely unredeemable even with spiritual intervention.

Please have your head checked at Mathare. You are asking wanainchi to give you a collosal amount of money to pay a fine that you and your husband are responsible for. You guys have no shame. Get the money from whoever you are it with.

Because according to her, her husband is not a thief. He’s just a typical Kenyan government employee who has fallen onto hard times. Being caught stealing is just a small accident.

The Kenyan government is a den of thieves , rapists and murderers . These thieves and their families see their actions part of the job. Not a crime.

That whole Kenyan government is a demonic organization.

After eating all that money she has the guts to vomit on our face. 67 years!... Say it loud 67 years.

Congratulations Chief Magistrate, Elizabeth Juma. You made feel proud to have been born in Kenya. Please, now hear my cry as senior citizen: If by any chance you will be assigned to handle Urithi case, because as of now there is enough evidence, the DCI should arrest the entire Urithi Management Team directed by the most notorious fraudster in the entire universe, Samuel Maina, his mentor Moses Kiarie and when sentencing Urithi legal counsel, Joyce N. Kuria, specifically, (be very hash) and sentence Joyce and direct she be jailed at Langata Women Prison for 25 years performing duties chia kuhorania uchuru na kuonoria ndoo chia ???. Thank you in advance Chief Magistrate, Elizabeth Juma.

OOOH, who will be next beseeching and confessing all his transgressions after swindling 10B from innocent investors by selling them bogus land? His name is Samuel Maina, the most notorious fraudster in the entire universe, Samuel Maina, his mentor Moses Kiarie and Urithi legal counsel, Joyce N. Kuria. Specifically, Joyce should be jailed at Langata Women Prison for 50 years performing duties chia kuhorania uchuru na kuonoria ndoo chia ???.

You know Mrs Waluke, when you ate meat from the stolen money, Kenyans were just swallowing the saliva (Mesa mate) from a distance! I do not understand why Waluke was given a choice to pay back the money or face the jail time. He should have been jailed immediately. Let Waluke experience a life of convict in Kamiti maximum security jail! That is where he belongs!

I would contribute to your call @mrswaluke had it been a medical need. But you as a second wife knew that your husband was stealing ordinary people’s money! You went ahead and helped Waluke consume stolen money but you did not alert the cops that your hubby had stolen. How come now you want the public to save your thieving husband!? Shame on you!

DO Ruto will pay the money you stole for you Waluke! Just pledge royalty to him and he will come up with more stolen money to pay back your loot!

My hope is that some sane judge somewhere in Kenya will get these type of cases and act on it accordingly. The corruption within Kenya is astounding. It is corrosive to the whole nation. Corrupt government officials have been getting away with murder. Someone please jail these conmen and conwomen. They are everywhere you look in Kenya. It is about time!!!!! Corruption is highly contagious. Long prison sentences are the medications for this disease. No sane person would listen to these foolish appeals . It is pure bullshit. Put them in maximum prison and throw away the keys.

Your husband is a thief and is not addicted to jail.Let him serve the time.If only the likes of Waiguru, Ruto and murderer mp babu Owino get the same treatment .Maybe there is hope in Kenya after all.Real thieves and not chicken thieves serving time

And you forgot to name DP William Ruto, the leader of the thieving club! I wonder how many years he will get in jail when the time comes for his verdict; and yes, his time will come!!

UHURU SHOULD TAKE CARE OF THIS JUST LIKE MZEE DUD FOR PAUL NGEI.
KIBAKI ALISAIDIA NANI...RUTO...
MAIZE SCANDALS HAVE ROCKED KENYA SINCE INDEPENDENT.

What kind of prayers do you need. May you rot in hell or??Stealing from hardworking people needs prayers?that's abuse of prayers.

"You are aware of our problem and I thank those who have stood with us during this challenging time and kindly continue praying for us.”

I'm not a praying man but I'll take a stab at it:
Ngai baba, Mwenenyaga twakuhoya you grant this man a long life, we also pray that all appeals fail, we pray he spends the rest of his life in jail, we pray that the money is found and given back to the rightful owners. We also pray that Waiguru, Gachagua, Kenyatta clan, Moi clan, Sonko, Waititu, Ruto and their crooked allies similarly find their way to this judge's court and are sentenced to long sentences. Dear Lord, make it so, Amen.

Another two amens from me.

...and God asked Moses, 'Why do you ask for what I have already given you? Raise your stick, and the Red Sea waters will part'. Kenya does not need new Leaders, new Laws, or new Judges. It just needs the present Leaders to follow the existing Laws, and the present Judges to implement them.