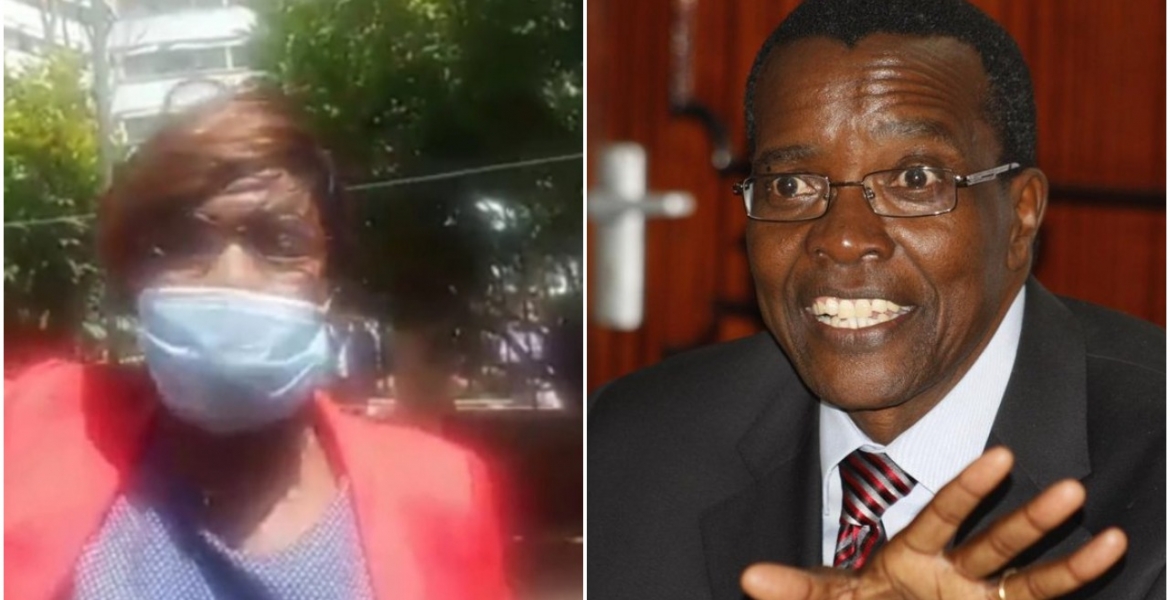 Chief Justice David Maraga has responded to claims that he fathered the daughter of a woman who caused drama at the Milimani Law Courts on Tuesday.

Through his lawyer Danstan Omari, Maraga stated that he does not know the woman and did not sire the alleged 6-year-old girl.

Omari noted that the documents the woman brought to court, including the child’s birth certificate, were fake and do not warrant a response.

He added that the woman, Mary Kwamboka Onyancha, only presented the papers in court for assessment but did not file a child support case after she was unable to pay the filing fee as required.

“That birth certificate is generated, it is not a document to be relied on,” Omari said. “If this is aimed at assassinating the character of the Chief Justice, it is our position we shall be calling on the DPP and all relevant arms of government to get to the root course of this fraud,’’ he added.

Speaking to journalists, the woman said they had been raising the child together until January this year when Maraga stopped supporting her.

As a result, Kwamboka said she reported the matter at Makadara children’s department but Maraga refused to honor summons. She added that Maraga has frustrated her attempts to file a child maintenance suit in the court.

She claimed that she met CJ Maraga in 2013 at a church function and got into a romantic relationship with him thereafter. She later got pregnant and gave birth to Maraga’s daughter in 2014.

Kwamboka was demanding over Sh160,000 from Maraga in child support payment.

If Maraga pays Shs 160K per month, and she contribute same amount; that adds up to Shs 320K per month. This is not support, it's extortion.

Maraga is paid in millions if not Billions if you include the briberies from the big thieves who have not spend a night in jail.
Amazing this whimp can still "stand"

Maranga should know he is working for a demonic organization that has cultic characteristics.

@maraga - just volunteer to do a paternity DNA test to clear your name if you do not know the woman! It is that simple and you shouldn’t sweat about it!

If that kid is Maraga's, it will look like Maraga. No DNA needed.

@sokoro Maraga - why are you fighting in a simple case? Do a DNA test to clear your name (good or bad)!

He doesn't want the Public drama; he wants the Court drama. Then DNA can follows there are real doubts.

Where there is some smoke, fire 🔥 end up coming from there. Do the dna test to clear your name! Kwamboka needs the money 💰 to cater for the baby girl!

Why is Maraga talking too much when the DNA test can be the final judge in this matter? Do the damn test Maraga!

The girl is your daughter CJ Maraga! Shs 160,000 per month sounds reasonable for a quick one night stand hit Mr. CJ! Just do the right thing to clear your name - DNA!!

You mean Maraga still got some bullets left at his age of 80?? Now all these young chics looking for old monied guys to raise their kids need to find a job. Lord behold!!

Maraga is a known womanizer. He dated so many University of Nairobi girls.

I have never seen a Kisii womanizer. You're lying.

Did Maraga force or rape her to pregnancy? If yes, there is case in court. If no, no case in court; so sought out of court.

I’m looking for an old dude like Maraga to impregnate as long as he can pay me shs 45,000 per month. Oh such a good deal for a Maraga type guy with some deep pockets!

I’m 22 years old! Do you have deep pockets? I will keep you happy and satisfied. I’m a hard worker!

@omari - you can call the DPP all you want but remember Maraga did not invite you to share the good times with Ms Kwamboka while he was doing crazy things in the darkness! Now you are trying to threaten the poor Church woman with the DPP sword instead of telling Maraga to do the right thing.

Tell Maraga to do the DNA test to clear his CJ character! You might be very surprised if you think Kwamboka just woke up one early morning and started dreaming about having sex with Maraga.

What are you gonna do if it turns out that indeed the child is Maraga’s?

I know Maraga. He will take DNA at his pace; and if need be or last resort. Ok?😰

Come clean. Do a DNA test.

🤣🤣🤣🤣let this idiot nullify this propagandas by getting dna.He has forgotten we shall revisit.Is he gonna blame jubilee for this.Mr church elder maraga the saint.

Is he supporting or against BBI? If he is against, he might be looking at a hired blackmailer.

Maraga should make sure his bench declares him bankrupt in January 2021 and then retire. It's that simple

@maraga is talking too much while he knows a dna test will solve this little problem! Be prepared to pay for putting your old ding dong pecker in the wrong hole!

Is Maraga not married?? And he goes to church every Saturday while fornicating behind the scenes in some wild bush!? Wow, ol lady surely gonna love this Maraga!

Maraga wear the damn mask to cover your big mouth before you start spreading other toxic things in the air! Besides, you can afford to pay for your sins.

A baby is not a sin, it's a beautiful gift.

@imkoogoogorogocho - Maraga committed a sin by cheating against his wife!! It is called infidelity! For I sting around with other women while you have a wife at home. That is the sin!

No body referred to the baby as a “sin”! You just need to be a little enlightened to understand hidden language.

While I surely doubt if Maraga has any sperms left to impregnate a woman, I am curious to know how the dna test result will turn out. The dude is too old to get that stuff up!

No one is above the law. If he is the father, he needs to pay child support. I agree with those who say a DNA would clear his name fast. If proven true, kudos to Kwamboka. Taking on strongmen is not easy. Plus, strongmen will protect each other. Where are the women's organizations in Kenya? This woman needs a lawyer to get child support from Maraga. You don't seek child support from rape. You go to court to get child support if the father fails to support his child. The problem is many men impregnate women and there is no accountability. If it is his child, doesn't he care to know?

Now it is clear why there is a case overload at the judiciary. Maraga has been chasing some skirts while neglecting his CJ job. Get back to work and pay the damn child support, Maraga!!

DNA is the way to go but the poor lady will be cheated out of results unless the likes of guest, guest#13 or guesty supervise. Kenya is corrupt. I have reasons to believe the lady is telling the truth coz she is sane and thus cannot pick the CJ knowing that he is Law. Why did CJ instruct Omari to respond by threatening Kwamboka with high profile case involving DPP if not to scare her away? And why frustrations at the registry?
Kwamboka, kindly file a simple case of seeking to have DNA test for your child.
Netizens...Are you willing to help Kwamboka?
DPP...Kindly veriy with Makandara children court whether CJ was surmoned before file dissappears!

@GUESTT..u seem to have control of maraga's personal itinerary just ask him to honour the responsibilities of a father to a child through the same sword used when other fellow men are fried through the courts.The woman is not a mad personal pointing out maraga having have dined in her cookie jars producing an outcome which he is now jumping out of it cunningly.Lets not be taken for a ride.We arent fools.Justice maraga just do the just and carry your own cross.

Did Maraga really respond to the allegations that he impregnated Kwamboka or did he just deny that he slept with the lady? I find no response here!

@ Josh,read again he says he did not sire that child nor does he know the woman.

I smell abuse of office. They say she couldn't afford to file the case, yet his lawyers are perusing documents from her case. Also, why is a child support at high court, and not a lower court?