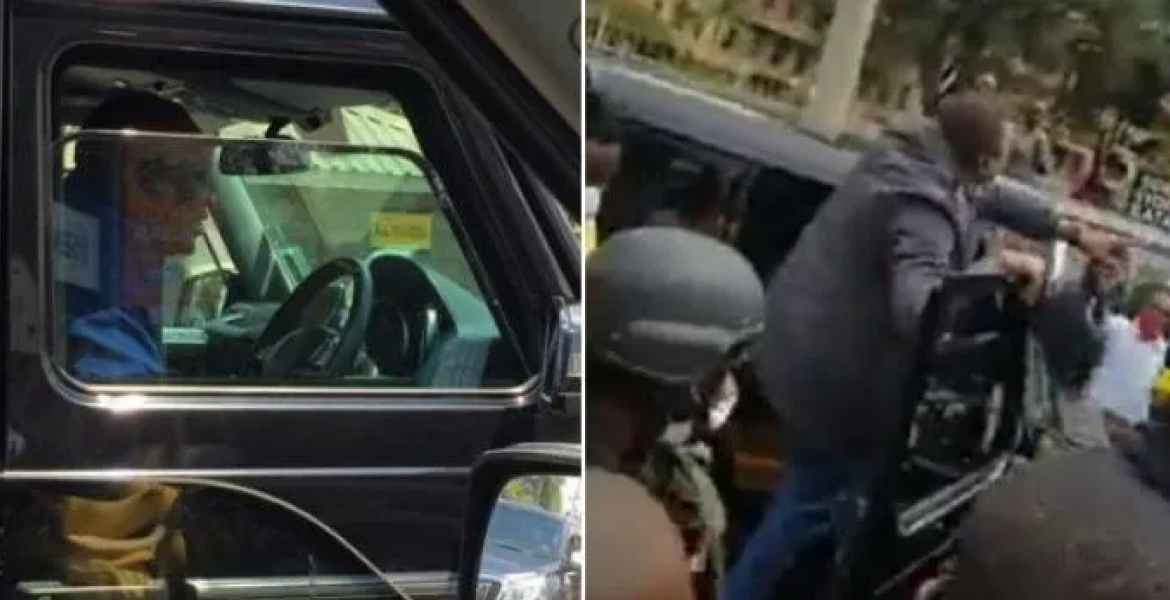 President Kenyatta was on Sunday filmed driving himself in Nairobi central business district.

A video recording circulated on social media shows Kenyatta making a brief stopover along Haile Selassie avenue and waiving at the crowd.

The crowd goes wild after Uhuru, who is dressed in blue jeans and black overcoat, alights from his favorite Mercedes G Wagon. A few seconds later, he gets into the vehicle and drives off.

Reports indicate Uhuru toured the city to inspect some of the projects being undertaken by the newly-formed Nairobi Metropolitan Services (NMS) headed by General Mohammed Badi.

The footage showed the two alighting a vehicle along Kenyatta Avenue with a small motorcade behind them. Uhuru was on the driver’s seat as Raila rode shotgun.

The visit was caught on CCTV at around 8:25 pm, with reports indicating the two had gone to see the progress of Nairobi beautification efforts by NMS.

The supporters of NMS appear to refuse to accept that :
1. Nairobi is one big slum with collapsing buildings, overcrowding , lack of water , lack of adequate toilets, landgrabbing everywhere, poor roads, garbage all over....the list goes on and on.
2. Governor Sonko is the Real and Actual representation of Nairobi slum dwellers.
3. A slum that is being occupied by an illegal militia.

Nairobi is a SLUM. If you live in Nairobi county you are a SLUM DWELLER(GHETTO YOUTH).
If you have running water and electricity your just GHETTO FABULOUS.

What the big deal. He's just another want to be independent idiot just like a common idiot like you and I.

yaaani pple get excited when uhuru drives himself .. yeye sio kiwete ... can we also get excited when he wipes his own ass after shitting or when he jerks off when drunk .. hii ni ujinga .. tigai wana ndurika ici

Moi drove himself, and even jogged in Nairobi. But no media dared to Spill it. And it's because his Presidential privacy and security were of Paramount importance.

why should he not go to mathere, kwanjenga,korogocho,and the biggest slam kibera where raira have been an mp for more the 20 years and he did nothing.