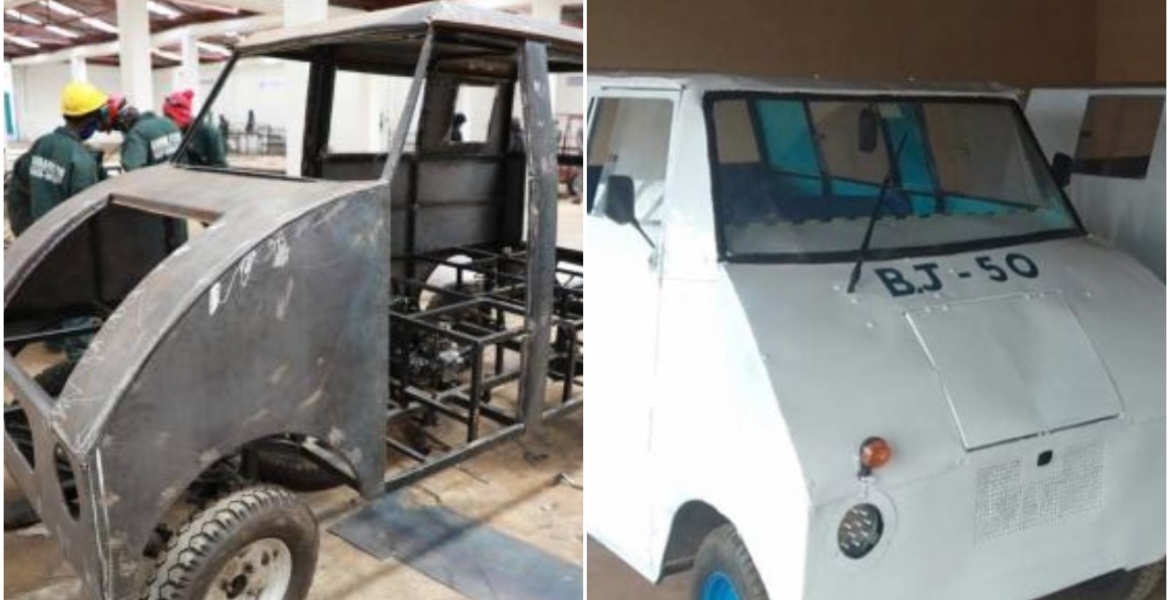 The government has signed a partnership deal with Sagak AutoTech to kick-start mass production of Kenyan-made car christened “Laikipia BJ 50.”

The locally assembled 7-seater vehicle was first unveiled during the 2019 Devolution Conference in Kirinyaga County.

Samuel Gatonye Kimani, a Nyahururu-based self-trained innovator is the man behind the Sh450,000 car whose photos went viral on social media last year with the Laikipia County Government promising to support the invention. 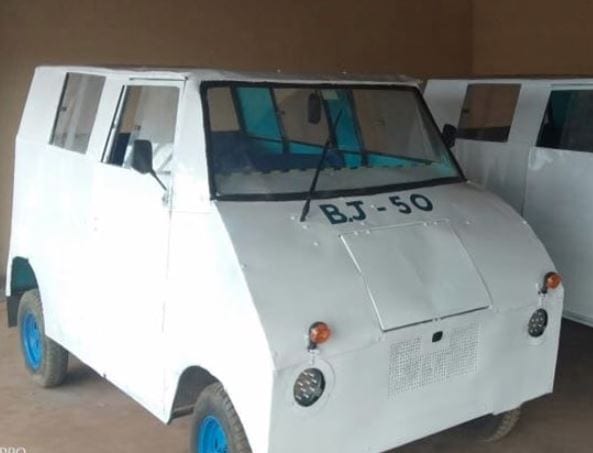 An article posted on the Laikipia County Government website last year said that the brains behind the innovation had received orders for 26 units from “influential personalities.”

On Wednesday, the Kenya Export Promotion and Branding Agency announced a partnership with Sagak that will see the car mass-produced for the local and international markets.

“Kenya Export Promotion and Branding Agency is collaborating with Laikipia County to assess the needs of up-scaling the Sagak Auto tech plant and build capacity to produce for the local, regional and international markets,” the agency said.

The signing of the partnership comes a week after Trade Cabinet Secretary Betty Maina officially opened the assembly line. The industrial unit is based in Nyahururu, where all the assembly and production is done. 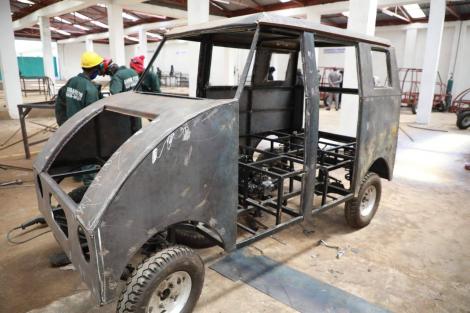 CS Maina said the government will offer its support in the production and marketing of the automobile to stimulate the economy.

I can't agree with you more.

I will buy it but they need to place some big wheels and not some ameteur tricycle wheels oh God help us. Are they thinking that small?
Would be good to carry some farm produce anyway. Hope its strong enough.

...the NYS tuk-tuk is a better 'contraption'......
https://www.youtube.com/watch?v=RO9SzOvzELs

If this contraption has a market he should go the Tesla way and get private investors, Do not waste the little taxes there are on nonsense like this.

What happened to nyanyo 1 car project?
Can't we just give Samuel the production equipment used in that project?
All we going to test for safety and like?
We need to promote our own.
But all in all, CONGRATULATIONS Samuel .

Yep. Reminds me of what we saw in the 80s with Nyayo’s Pioneer 1 project that was souped up but ended out disappearing as fast as it came to be publicized. Good luck with the new project though. Lets just improve the looks and invest well in machinery for mass production. Jobs will come and Kenyans will be much happier.Lets Make Kenya Great Again ..:))

Can somebody explain to me. What is special with this ugly thing? What does it use? Can it be driven in mwiisho wa rami without getting stuck in the mud?

It is a pink warthog with white teeth.

So ana way to steal money. This has gone too far. The countries pride is at steak FFS. No...just no.

Is Kenya in a time machine goin backwards to the era where they were no cars and trying to be the first to have a car. This is a joke n not a very funny one.

This is the next Kenya Tesla !!!

we can do better than that, who would even buy this crap. If we manufacture a car it should be to international standards otherwise it is a waste of time.I like the idea but not the car.The Kenya polytechnic should show them how to do it.

@RAS menelik, which insurance company will agree to insure this ugly thing that does not meet international standard. It will be a big liability. No airbags to save live. Who knows whether this thing has brakes.

OMFG!! What is this? It's not April 1 so it's not a joke but this looks like an uglier version of of the mutt cutts van in dumb and dumber. Words fail me!! So to use the words my mother used when I did something really pitiful, woyoyo!!

This is so wrong on so many levels. Where and what is the motive power? steering wapi? Wipers?bumper? Crooked sheet metal, wheel barrow tires. Flintstones anyone? This thing is a turd and you can't polish a turd.

Wait a minute..where is the Chassis..looks like fundi wa kuchomelea will have long lasting contract..though am a layman in the engeneer ing behind

We must stop imitation and promote emulation. Who are you trying to help? Farmer? Peasants? Students? Simply, this is a solution to a no problem. I wish he could come up with just a self warming house for cold regions like Jabini and Nyandarua. Simple and clear.

I think in Kenya we cannot mature . 57 years after independence yet we are still thinking jua Kali. Who will you sell that car made by manual jua Kali workers ? Even if you do reverse engineering like what other countries are doing you cannot make a car that way . A car has more than 1000 parts both large and and parts as small as washers . you can not make a car from welding mild steel parts . cars are mostly made from steel which has been specially treated or mostly from aluminium and most of the parts from plastics . You need special machines such as CNC , 3D printers ,molds etc which Kenya doesn't have in the first place . in which house are out engineers sleeping .You must wake up now and advise appropriately . Participate in government policy making on industrialization . Don't leave this job to be done by economists alone while you are busy sleeping . you have delegated the work of engineering to be done by mechanical artisans in the name of engineers

Give me the NYS tuk tuk anytime.
https://www.youtube.com/watch?v=RO9SzOvzELs

This is a bold move. I guess this is the best that the father of the idea could offer with the limited budget so stop hating.
We have brilliant panel beaters and good structural engineers that can help in Kenya.
I hope gov red tapes and politicians vested interest won't tape it to the grave

The issue is not whether it can be done or not but how it can be done and how best it can be done . We are not reinventing the car .The car has been there for generations . In Africa we should stop thinking like we are going back to the stone age . We should think industry 4.0 . cars are made up of many many parts which are finally assembled into one assembly .

It is time we start thinking about industrial clusters and ecosystems where many companies come together to make one assembly in this case ,the car . Every car part is supposed to have one factory or one process line . How can you achieve mass production if you are just fabricating a car in one single location using jua Kali artisans . Again we are beyond the era of mass production . mass production was practised by Ford Motor corporation .Nowadays we are in the age of lean production ,The Toyota way and even going beyond . we should further look at our supply chain which should be globalized once we succeed in producing a car which can compete globally with other giants like the Toyota and Vw etc

Very true. This is the only part where African nations get lost. Its an intention to create that if looked on can grow

As I read some of this comments I could not help but wonder why there is mixed reactions, the guy has done good. Let us look at where car makers like VW group have come from compare a vw thing and the new VW Atlas, and if you read more on vw group you will be amazed.

It looks like Mkokoteni ( handcart ) covered by flat metal sheet.
Chassis is made of square bar size 2x2
I think a standard 8 boy could do better than this one.
I hope it doesn't break down from first day it comes out from the showroom.
The driver will have severe backbone pain with this kind of handcart tubeless tyre.
The bicycle might have better speed than this car...Lol

This is a big joke,is it meant for passengers or farm produce.

Back to stone age! dont they know we are now on electric century god save our money i wish they were going to manufacture tricycles we could at least forgive them

Not to discredit the brains behind this innovation, it is good to note that such creativity lies amongst our people, and to our surprise a person in nyahururu.
My problem is not with the innovator, but with the county government and any stakeholder who purports to support this idea. It's hypocritical to finance this production yet none of them would proudly drive this so called donkey wagon 7 seater.
Talk of the Mobius that was greatly publisized and a deal was signed with KVM Thika. Uhuru rushed to buy a few units and that was the last we heard of the Mobius wheelbarrow.
Can't the county government help implement the idea with the innovator by inviting a designer and perfect the design and usability of the wagon???
My wishful thinking...

I can see mostly negative comments almost all about the looks of it from his compatriots . "The beast" of American president isn't beautiful either, but the engineering is serious. The guy has put in his best. No one is bothered to know how the engine and gearbox were made.
When the government says they'll support him, it's not only money but it'll give him experts and the market. Government is not foolish to spend in something who's future is not promising. Let's give the guy support and motivation.

This is a serious problem not a joke, we are in the 22nd century and you think we can embrace this mediocre for a car, we need, beauty, hi-tech and safety, if the national government, county government and KEBS thinks this is the greatest innovation, let them show by example, they buy for their Cs, officials and directors, the the common man who you think you will manipulate through registration, takes and fuel levys can follow suit.

It is interesting to read comments about this innovation. 90% of comments are negative. Only few people think this is worth the efforts. Nyayo Pioneer was revealed in 1989, negativity killed the dream. Pioneer was a exact replica of Pony made by Hyundai at the time. After Pony, Koreans hired experts from US,UK and Japan to polish their dream and keep the brand. Today Hyundai competes with US, UK and Japanese makes with vehicles designed and made by Koreans. A while ago Mahindra sold us some rickety vehicles which we effortlessly out run. Today Mahindras clock the same mileage as Toyotas. We can borrow a leaf from the Koreans but are we willing? If we pay expertriates to couch football, we can hire some to work with this innovator do we even consider such a possibility?

A waste of taxpayers money, that is like re- inventing the wheel and work of a small brain we need brain boxes that can make something from their heads its shameful.

This is a financial scam by the Laikipia county govt

Haters will always hate. A guy in Nyahururu with little else than his brain comes up with an innovation. Rather than look at the brighter side, do constructive criticism, and suggest improvements,all the haters do is hate and try to pull our guy down!

Kudos to the governor Kimemia, the county government of Nyahururu, and all who are supporting the innovator. Thank you Sagak Motors for believing in our own. When you improve on this innovation to bring it to international standards, and start mass production, count me in among your first customers. I will buy two units of this Kenyan-made car to promote our own!

It alwasys boils down to 'our guy'. Typical.

if I was supported by the gorverment most of my sketches would compete in a global market and scale....some of my units even have electric drive trains and suspended chasis...