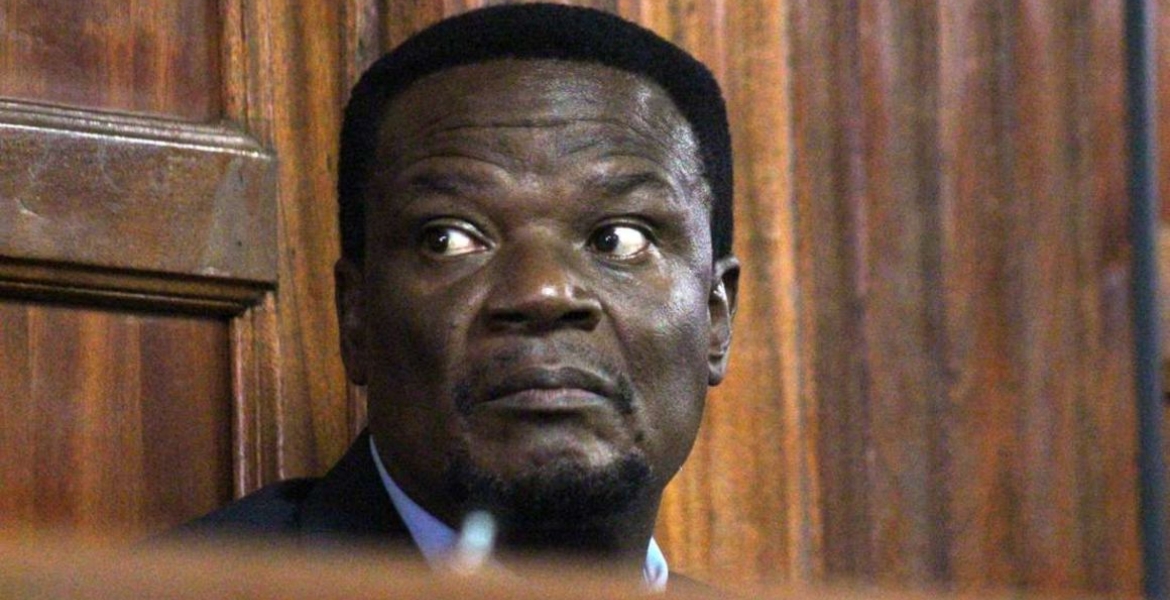 Roseline Nakhanu, the wife of jailed Sirisia MP John Waluke says she regrets launching a fund drive to raise money to bail out her husband.

Speaking to People Daily, Nakhanu said she has been subjected to ridicule and abuse after she set up an MPesa pay bill to raise funds to secure her corrupt spouse’s freedom.

Waluke was on June 25th, 2020 handed a 67-year jail sentence after he was found guilty of defrauding the National Cereals and Produce Board (NCPB) over Sh300 million. To avoid serving the jail term, he was ordered to pay a fine amounting to Sh727 million.

Determined to raise the hefty amount, Mrs. Waluke set up a pay bill and called on well-wishers to contribute. She told People Daily that nearly Sh400,000 has been raised through the pay bill number.

The family has so far managed to raise Sh250 million, which includes Sh100 million contribution from a senior politician close to Waluke, Sh6 million from Waluke’s colleagues in parliament while the family contributed Sh144 million after selling a property in Nairobi.

“I regret starting this fund-raiser to bail out my husband. People have been mocking me and hurling abuses at me instead of helping,” Nakhanu said.

“I wouldn’t have done it had I known things would turn out this way. I have left everything to God. Some are calling and telling me that they can’t contribute money for a thief.”

On the other hand, Waluke’s co-accused Grace Wakhungu could soon be set free after her family raised over Sh800,000 million in just one month.

Wakhungu, who hails from the powerful Awori family, was handed a similar jail sentence as Waluke’s and a fine of Sh707 million.

“In fact, we outdid ourselves by raising close to Sh800 million, being contributions from family members through the sale of assets locally and abroad, personal savings and ‘silent’ funds drives by friends,” a family member told People Daily.

Wakhungu is the mother of former Cabinet Secretary and current Kenyan ambassador to France Judi Wakhungu. Both Wakhungu and Waluke have appealed against their conviction and sentencing.

Let him lot in jail or ask him to tell you where the stolen money is hidden and you can use it to jail him out. My view, some of these blue color thieves should be executed publicly. Si tunalynch chicken thieves?

I don't understand this kind of justice where you can buy yourself from prison.You get bail out before you are sentenced , once sentenced you do the time.That means prison belong to the poor and you can kill someone and pay your way out.Third world justice.

Hei lady; you know you are asking aggrieved folks to cough a lot of money for your husband’s freedom? Both of you ate alone but now you want those you stole from to help you? You should not feel the pain when you get insulted!

You got what you deserve, mocking and mocking

In fact “we outdid ourselves by raising 800 million “in just one month.DCI needs to investigate this braggart family where is all this wealth coming from if not stolen funds they are being forced to give up all this in a country where a woman is forced to boil stones to coerce her hungry kids to sleep.

I agree @Guest. These properties they are boosting about, local and international, are proceeds of stolen funds sanitized in investments. This is a game they have mastered and money to them is just papers... idiots will not buy themselves out of death nway...

DPP Haji is beginning to bear fruit, in the fight against corruption. He was willing to go all the way to South Africa, to prove that documents submitted in Kenya were false. Most cases collapse in Court, because the Investigators either produce Insufficient Evidence, or no Evidence at all, leaving the Judge with no choice, but to acquit the Accused. In this Case, the Investigators actually went to South Africa, and called witnesses to Kenya, to testify that the whole thing was a scam, to con Kenyan taxpayers. The DPP went out of his way to prove his case, and even according to the Judge, he succeeded. The Law that was used to Convict MP Waluke was enacted by Parliament to fight Corruption. The DPP has proven his Case, and the Judge has agreed. I don't have a problem with a system where anyone, or everyone, pays for their Crimes. If Waluke stole shs 300 million from the Cereals board, and the Law says that he has to refund 3times that amount, ie shs 900 million, there is no problem with that. If this Conviction is upheld on appeal, it will be a major deterrent to Corruption. I am still waiting to see how his appeal against the Conviction will proceed in Maraga's Judiciary.

This guy is a cow. Other mps shoot people and dont spend one night in prison.

Why do Kenyans forget so quickly?Former VP,Atwoli benefited from Kibaki's ANGLOLISHING scandal.He was the 9ne who signed the shs 4b purchase of second hand ferry(scrap) from Spain.He also signed several other fake contracts for payments in the shs 165b.scandal.This means Kenyans are paying themselves the Shs 800m.fine for Grace.