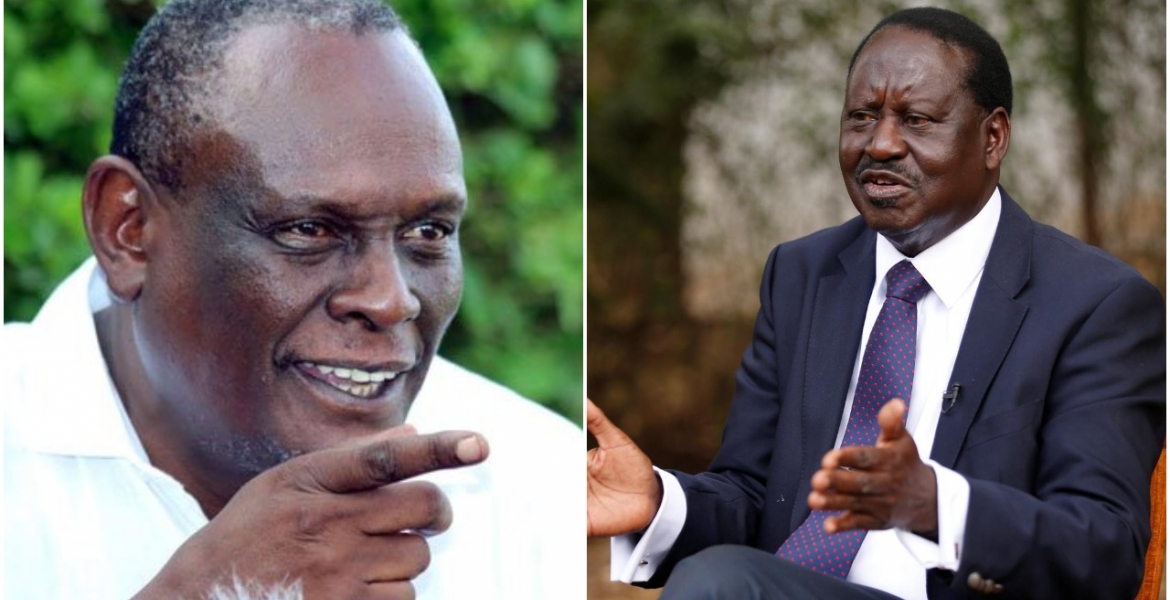 He described 2022 as a “Mandela Moment”, where all Kenyans will unite to reward Raila for all the sacrifices he has made for the country.

Murathe, who spoke during an interview with KTN on Sunday, suggested that Raila will be a one-term transition president who will clear the way for the younger generation to lead the country from 2027.

“We think it’s time Kenyans rewarded the years of struggle of Raila Amollo Odinga. They owe it to him. It’s like [Nelson] Mandela, and 2022 will be a Mandela Moment.”

“And we would also like to tell him (Raila) to be a transitional president who will then nurture the young generation to take over in 2027,” said Murathe, a close confidant of President Kenyatta.

He expressed confidence that the Building Bridges Initiative (BBI), a brainchild of President Kenyatta and Odinga, will shape the country’s political landscape in 2022.

“What I can confirm is that in 2022, we will have a poster. And in that poster, there will be a portrait of the Handshake.”

Dreaming David Murathe. You are worth a single vote. Presidents are elected by all registered voters. Allow dreamers to dream.

And how many votes do you have to vote for a thief called Ruto? You are dreaming big! Stop wasting your vote giving it to a thief!

He’s not dreaming .
They all deserve what is coming to them. Including Raila.

Not to me,He won’t be a damned president of republic of Kenya even Kisumu itself.there will be a special genocide like 1994 Rwanda but not Mganga Raila becoming a president.

Mūrogi of the nation has laid it all bare. No need to vote.

You can keep Raila.

🤣🤣🤣🤣 Murathe keep on dreaming.Ruto will beat Muuaji,economic saboteurs,by 12pm.The man to b stopped for becoming the president is Ruto juu he carries the most numbers to win whether we like him or hate him.The only way to stop Ruto is uhuru/raila to support someone neutral like kibutha kibwana/Ekuru Aokot/Peter Kenneth then Ruto will b wetting his pants.Otherwise rao will b embarrassed by we the kenyan majority voters na wakiimba kura kenya is gone juu we will not allow the so called system to elect rao forcefully

Raila looted billions and killed thousands of Kenyans to pay himself long ago.Why can't Murathe & Co award Koigi(who was detained more than Raila first?)Why does Murathe compare Mandela who never looted or kill anybody with Raila?

Hehehehe bwana daktari well noted but tutakuwa tu hapa n promise me u will come over at my limit I daily farm to enjoy maziwa mala na kabuzi after voting watching raila bin roasted for the last time by Ruto?Beba BAba Ikulu bbi is a piped dream tutaisngusha referedum especially we the Gema pple

Africa needs only pro business leaders OTHERS you can hang them.

Some dreams come true while others dont. Raila wil not and never wil he be prezo in Kenya. Rao kiled thousands of Kenyans in 1982 sttempted coup. So many died in 2007/8 PEV coz of Rao. He stole Kisumu Molases plant frm Kenyans. Maize/Kazi kwa vijana funds nkt.
GEMA will not take scrap for prezo.The Kaleo will vote as a blok against Rao. Murathe had a bad dream.