Deep State Rescued You from ICC, Atwoli Tells Ruto as He Dares Him to Resign 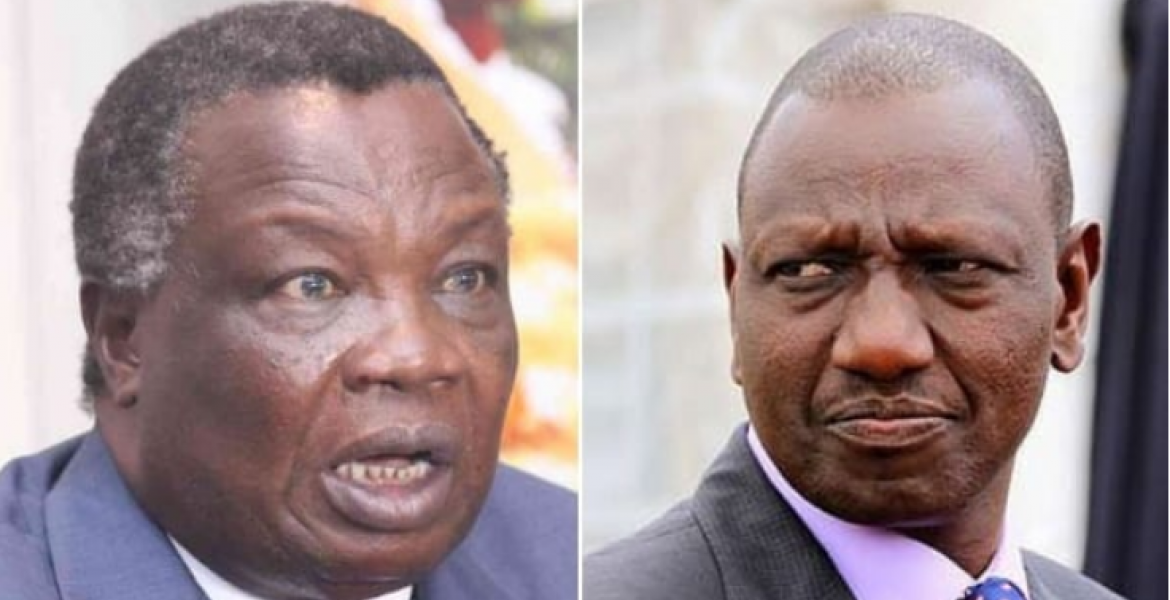 COTU secretary-general Francis Atwoli has slammed Deputy President William Ruto over claims that the ‘deep state’ is planning to stop him from ascending to power in 2022.

Ruto on Wednesday said he will rely on God and Kenyans to defeat the deep state and the system who are determined to rig him out in the 2022 presidential election.

Responding to Ruto’s claims, Atwoli said it is hypocritical for Ruto to fight the same deep state that rescued him from the jaws of the International Criminal Court (ICC). Ruto had been charged with crimes against humanity at The Hague-based court alongside President Kenyatta but their cases collapsed due to lack of sufficient evidence.

“I can tell you that it is former President Mwai Kibaki who saved Ruto from the ICC. He [Ruto] also had it easy during the 2013 elections. He should not forget that.” Atwoli told The Star in an interview.

He added: “Ruto is a daytime dreamer. He is dreaming. He will never be the president of this great country. In fact, no one will stand in his way to stop him. We will see where he will get votes.”

Atwoli further challenged Ruto to resign from the government if he has no faith in the system he is part of.

“The best thing the deputy president should do is to resign. If he doesn’t know the difference between him and the deep state,” Atwoli said.

“Ruto is interested in politics instead of serving Kenyans. He is number two and if he is not comfortable he should resign. This young man should not be rude to his bosses who are the taxpayers. He needs to understand that he is using the taxpayers’ funds for security, transport, and hosting delegations and must respect them.”

Ruto is the deep state per see! He is the so called the system! Whenever Ruto is talking about these divisive things, he is indirectly talking to Uhuru! He is trying hard to undermine Uhuru in order to cause chaos in the government!

He should resign from the government to carry on his divisive narratives without being sponsored by tax payers funds as a DP!

Ruto’s foolish nonsenses must be stopped forthwith! Kenyans have had enough of Ruto’s senseless game playing. We need a DP who sponsors the development projects for the Kenyan people!

Ruto has outlived his usefulness! Only a damn fool that can’t see Ruto’s baby politics!

Stop wasting our tax payers money and resign @ DPRUTO!! Enough of your madness is enough! Quick and let others work for the people!

SP Ruto is a bonafide conman! He even addresses himself as the deep state without knowing he is the deep state. How foolish can a whole DP Ruto be???

Kenyans get sick and immediately start throwing up/ diarrhearing any time Ruto opens his damn stinky mouth!, quite literally!!

This “Deep State” must really hate Kenyans. They are the enemy within.

True - you have stated the facts! When you see Ruto stealing from the people like no body’s business, it tell you that Ruto hates the people! You can’t steal as much as he does and claim to love the people! The only thing Ruto wants is political power. Once he gets it, Ruto will sell every body with the country. He then will take off to some developed country and hide there! Just look at the evil expressions in Ruto face. Look at Hitlers photos and there look at Ruto’s face. Facial expressions say a lot about a person. Ruto’s facial expressions are clearly something for Kenyans to worry about! They show hate and doom! That is how Hitler was when he killed 6 million Jews due to some hidden insecurities! It can happen in Kenya with Ruto!! Everything he is talking about shows a lot of his personal insecurities and anger!

Ruto is a thief and murderer. This is well documented.

Kikuyus and Kalenjins view not holding the president or vice-president position as a catastrophic event. It’s equivalent to “Death”.

This is just a sign they are in a cult.

Deep state is a Ruto’s coded word telling the kalenjin to organize themselves to kill those they used to call madowadowa in 2017! They have been holding meetings at Sugoi where a catchie of secret weapons is kept near Ruto’s house!

MP Sudi and Senator Murkomen are Ruto’s organizers just like Radio presenter Sang was in 2017! The assistants to those two are MP Ngunjiri of Bahati and Susan Kihika!

So when you hear Ruto talking about deep state and the system, he is strictly talking to his people, and he is secretly communicating to the Kalenjins in regard to cleansing the Rift Valley!

Everything Ruto is saying is coded! People must take Ruto’s coded messages seriously and get prepared to fight back! Ruto is ready and willing to cause anarchy in the entire country! He will try to steal the election and if that fails, he will burn the country country down!

The Kenyan government is a cult and the removal of Kikuyus and Kalenjins from the National leadership is viewed as “Death” by both communities.

Therefore, their automatic response is to kill anyone who they perceive to be trying to remove them from the cult.

According to these two tribes, if they are not holding a position in the National government, they are essentially dead.

This is called brainwashing.

Other tribes have not died by being outside national government.

@guesty - That is why we need to pass the BBI so that any tribe can get the presidency position! But remember numbers matter in political elections.

But with the BBI, every body will have a fair share and there will be peace after every election. Ruto does not want that fairness to exist because he wants the winner taking it all so he can continue to steal from Kenyans!

As you say @guesty, the Kikuyus manage the government better than wakale. Wakale like to eat and steal everything and they don’t think about the other guy.

That is the reason Ruto should never be the president of Kenya! The kalenjin will steal everything without regard!

Are there two parallel governments in Kenya? Uhuru Kenyatta wake up. Ruto and the deep state are enemies that are up against your government. Has Ruto cornered you? Where is the DCI? I wish it was Mzee Kenyatta who is at the helm at a time like now. He would say: Hatutaki

What has Atwoli done for his people and COTU in general? Ruto got my vote!