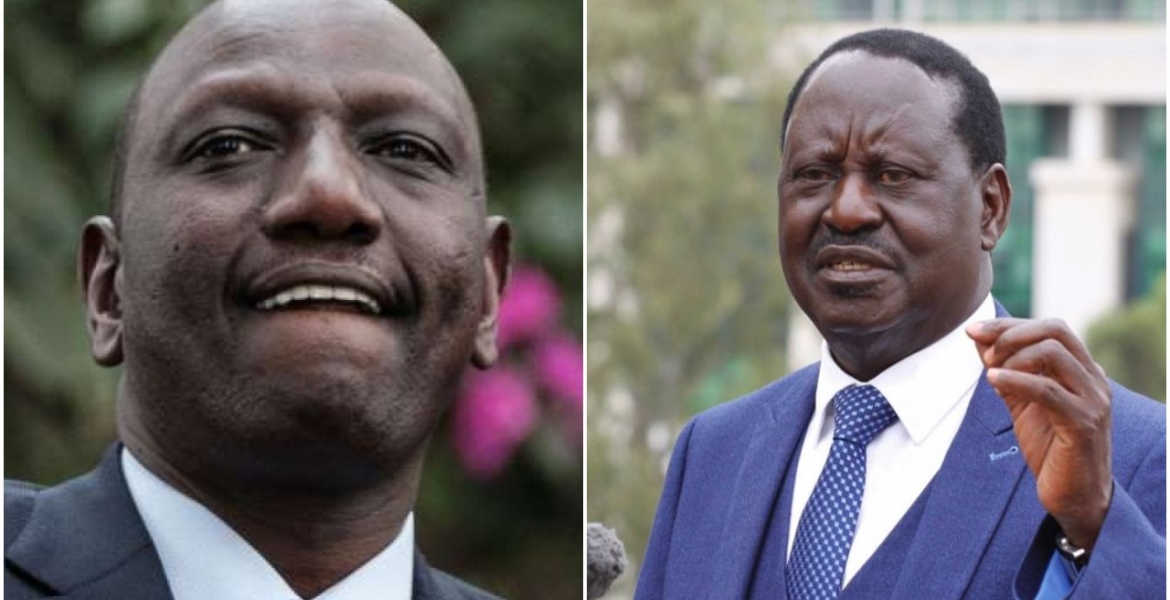 Raila Odinga has reacted to Deputy President William Ruto’s claims that the ‘deep state’ is planning to rig him out of the 2022 presidential election.

Raila pointed out that he is not in a position to comment on the existence of the so-called deep state as he is not a member of the government.

The only people who can talk about the deep state is President Kenyatta and DP Ruto because they hold the top-most positions in the country, according to Raila.

“I hold no position in the Government of Kenya. It is led by the president and his deputy, whose names you know. So if you’re talking about the ‘Deep State’, who is there?”

“It’s the President and his deputy. So go and ask the DP which deep state are you talking about. We are not in government as ODM. So we don’t know about this deep State,” Raila told reporters at Orange House in Nairobi on Thursday.

On Tuesday, DP Ruto declared he is prepared to face the deep state and the system, expressing confidence he will emerge victorious with God and the electorate on his side.

Baba - you are talking to a mad man! He is the market farting guy you always have talked about. Ruto is preparing team-ruto for the planned events to destroy the country in 2022 if he does not capture the presidency!

Ruto is the deep state and he knows that far too well! He is a deceptive evil character that cares less about the plight of the ordinary people!

He will infuse his evil games with the religious opium to confuse simple minds; and yes, there are many feeble minds out there for Ruto to confuse to win political favors! Kenyans needs to wake up and say no to Ruto!!

Kikuyus and Kalenjins believe they will “Die” if they’re not holding the president or vice-president positions in Kenya.

The Kenyan government is a cult( a con).

Someone clearly went to a very great effort to brainwash these 2 tribes.

Why is Ruto talking of being rigged out of the 2022 in 2020? The things ruto has done (corruption, stealing, murders, etc) do not allow Ruto to run for presidency in 2022. It is that simple!

How can a DP of a government feel threatened when he is the second in command and part of the government? Is Ruto feeling alright? What is he talking about? This is so silly and stupid for a DP Ruto to claim who he is; the deep state!!

Because he has been already rigged out as Second in command by the Deep State. This is evidence of what DP is talking about!

Ruto is trying to undermine the current government of which he is a member by using lies and divisive narratives.

He wants to create political grand standing since he failed to have Uhuru impeached! He using religion to gain easy sympathy from the faithfuls and the religious leaders!

What Ruto is doing is boulder-line treasonable!

DP Ruto’s intentions is set the government into a state of confusion and anarchy! That is his primary goal to confuse the hand shake!

He is trying to get even with the hand shake (Uhuru and Raila) which has brought peace and tranquility in the country!

Ruto wants chaos so he can thrive! Ruto thrives in the most unorthodox ways! Listen closely to his lieutenants eg Sudi, and Murkomen, Ngunjiri and Kihika, Kuria and Alice, Didi and Waititu, Ichungwa, etc! They are all vomiting the scripts that Ruto himself has written for them. They are all chaotic characters that thrive in confusion and nonsensical shady politics!

@sokora - what is deep state and can you name those in the deep state!?

Raila! You know the others. Don't you? Did you forget the handshake?

Raila is deep state? How do you know and he is not in the government? Who are the other players.? I want to be the deep state too like Ruto!

For some reason Raila actually believe the Demonic cult members will embrace him because he is supporting them. Like they did before. They won’t. They don’t trust him.

William Ruto and Uhuru Kenyatta are so brainwashed they believe they will die if he is not in government. Hence, BBI.

Kikuyus and Kalenjins are in a cult. The cult is the Kenyan government.
They believe if they are not in National government they will die. As such they are willing to kill their neighbors to avoid not being in the cult.

The rest of us need secession. We are not going waste our time deprogramming zombies. Not just zombies , zombies who are taught to hate the rest of us.

More Signs the Kenyan government is a cult(demonic cult)
1. Rewarding loyal supporters with Head of State Commendation (HSC) for defending the government (defending mediocrity and criminal activities) & rewarding them for insulting Raila Odinga (eg: Itumbi, Alai , Pauline Njoroge among others)
2. “Raila will never be president “<<<< A thought stopping statement.( to stop any questions, suggestions or differing opinion)
3. The idea of outsiders and insiders(some Kenyans are more Kenyan than others—Justifying Breaking the law to forcibly remove Miguna from Kenya)
4. Using Loaded language like “deep state”😅
5. Confessing deep fears such as “Munataka nifanye nini?” by Uhuru Kenyatta, asking for forgiveness for stealing and killing Kenyans

The Kenyan government is a cult.

“ We will come with God & Kenyans”??? Which god is this thief talking about? The god of thievery and corruption? Why is Ruto sooooo determined to be the president of Kenya? Why is it so important such that he’s campaigned For presidency since the day Uhuru Was sworn in? Shetani ashindwe! Kenyans, let’s be the movement of CHANGE; Kenya has suffered enough! Let’s not be negligent not gullible.

More power to Ruto will make him even more corrupt. Just look at every one in team-ruto and you will realize they all have been involved in corruption issues! The most corrupt among them is Ruto himself. He want power so he can hose out the Kenyan people! He is the worst known thief in the history of mankind!

Get that voodoo out now or it will be never

You can take Ruto to China with you @wax! No body will cry foul here!

Ruto is peddling misinformation, lies, and conspiracy theories to confuse the general masses so he can generally benefit from the misfortunes of the entire country! It is really very sad to even think what DP Ruto is doing to Kenyans.

Can some body ask Ruto and MP Sudi why they have stolen the ITT’s 135 acres in Ngeria? Sudi and Ruto have been farming there. There is no politics here; they are both trying to steal 135 acres belonging to the public!

Our children have been denied the right to an Institution that will help them in the future! First if they were stealing the money to build the institution by putting risky shoddy structures which the court stopped the construction.

Now Sudi is telling us that Ruto have not been in the government since 2017; and why is Ruto receiving tax payers money and benefits in terms of salary, etc?

This is why Sudi and Ruto have notched up speaking about the deep state and the system to overshadow what both are doing in Ngeria! They political empty talk is a narrative Ruto have coined to cover up the theft of land in Ngeria! Does DP think we are stupid??

These two thieves must return our ITT land so we can build the institution! While there is a problem with the covid19 money, the DP Ruto and Sudi must tell why they are stealing our public land here in Ngeria! We want our institution’s land back!

When are Kenyan going to have a discussion that does not revolve around tribes it sucks. A good number of Kenyans have family members from different tribes and even the greater East African region where do they fall in all this tribal BS. Please let as talk KENYA not tribes if we want to move forward.