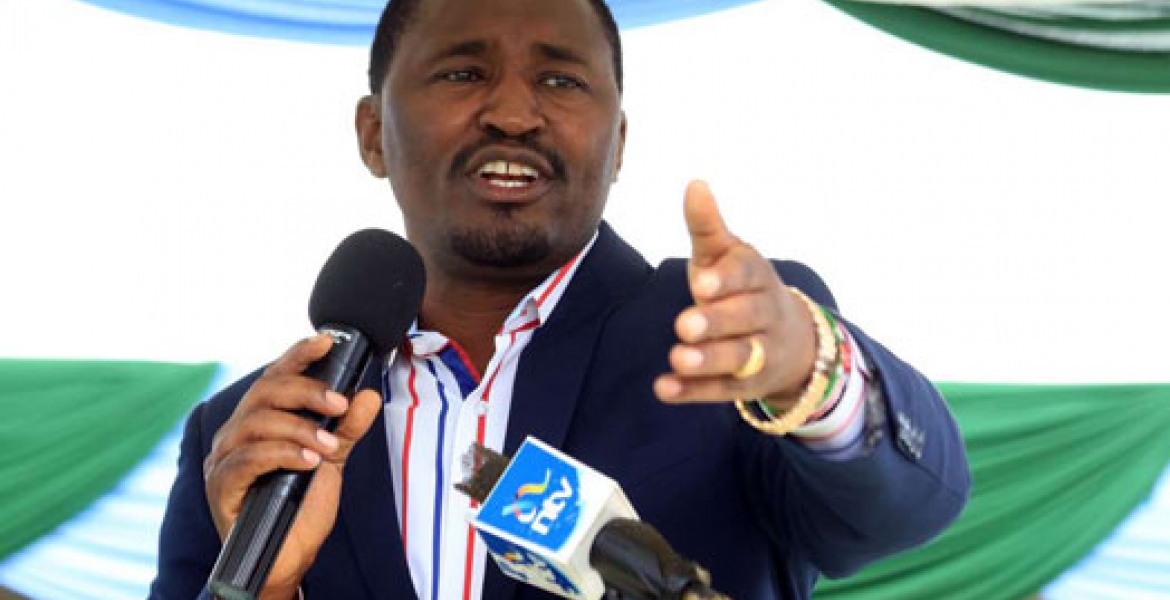 Former Agriculture Cabinet Secretary Mwangi Kiunjuri has called out President Kenyatta and Deputy President William Ruto for what he termed as reneging on their promise to Kenya.

Kiunjuri, who is the leader of The Service Party, claimed the two have failed to live up to their pledge that the country would never again experience bloodshed over politics and elections.

Kiunjuri accused Uhuru and DP Ruto of turning their supporters against each other, which could plunge the country into chaos akin to the 2007/08 post-election violence.

“The pledge the duo gave Kenyans was that they would bring to end bloodshed and post-election war. Today, both of them, have deserted that position. Why?” Kiunjuri posed.

Addressing mourners at the funeral of his sister-in-law Anne Wairimu in Kieni, Nyeri County on Friday, Kiunjuri also took a dig at ODM leader Raila Odinga, saying he has no moral authority to lecture people about respect for President Kenyatta.

He said Odinga failed to reprimand his allies when they were insulting President Kenyatta prior to the March 9th, 2018 handshake.

He asked the three leaders—Uhuru, Ruto, and Odinga—to apologize to Kenyans and lower the current political temperatures in the country.

Kiunjuri was fired from the Cabinet by President Kenyatta early this year.

Kiunjuri - you are lying to us too! Did you not work for the jubilee government? How come others started lying after you got fired! This is the problem with wanna be politicians! You are just like all those you are calling out or worse!

He is part of the fertilizer stealing cartel.
He was busy stealing subsidized seeds and fertilizer from NCPB.

He was busy sabotaging Kenyan farmers and importing maize from Mexico to kill local production. Among other things.

He belongs in jail.

Kiunjuri steals small things like maize, beans, waru, fertilizer and coffee! The small thieves are more dangerous than the bigger thieves! He sounds like he just woke up from a comma and now wants to challenge the brainy thieves!

You all behave the same, but thank you for pointing a finger to those who stand in the way to your heart’s desire, the State house.

Your ass would not have been fired if you were reasoning they way you are now.

Good Job Kiunjuri, albeit a day late and a dollar shot!

Couldn't have said it better

Kiunjuri, unbelievable. You sound like you just got a brain transplant. Is this the real Kiunjuri? The maize thief?

Mwangi Kiujuri has been sabotaging Kenyan farmers. He is a fertilizer thief.

Stealing subsidized fertilizer and resaling it.

He should be in jail .

Here comes another thief pointing fingers at his perceived enemies just because they fired him! This fella here would take Kenya to hell if he ever became a president!

The man could not even grow some maize or feed the pigs with the little amount of maize he had in the barn!

The devil must be very crazy to have Kiunjuri pointing out the faults of others but hike his faults are bigger than Mount Everest! Wewe punda Kiunjuri!

Does this Kiunjuri look any presidential? He looks like a thief to me! He does not even know what he is talking about.

Now - given a choice among the two thieves - DP Ruto and Kiunjuri, I would rather vote for Ruto who is a bigger thief than this thief of maembe, maize and beans! Kiunjuri looks clueless and very unsure of himself!

The man is back to his senses

There is no one who can guarantee your safety simply stay out of trouble.No politician on their own cause ethnic clashes if anything ni wajinga tu who steal kill and maime each other while their leaders are safe in their mansions.No politician can ever guarantee there will be no Ethnic clashes people have to learn to co exist and when there is trouble police have to deal with it swiftly to stop it from spreading.Your 15 minutes of fame are over you and your ilk mtajipanga serikali bado itaendelea bila nyinyi.

Let DPP Haji tell the court when Uhuru and his family bought Kenya(ns).But Kiunjuri must pay loot share dividends to his Gikuyu tribesmen from the shs 6b.he and Ngilu "ATE" in the 2009 GHOST DAMS SCANDAL.He was Ngilu's assistant in the water ministry.Does the AGiKuyu I saw helping Gathoni to bark how Uhuru and Mom were abused know that she receives shs 450000 loot signed by Uhuru for house allowance every month?I felt sorry for the yarnining WaMamas.I reminded told Uhuru,Ruto,Raila to watch Bashir or expired Mubarak videos.