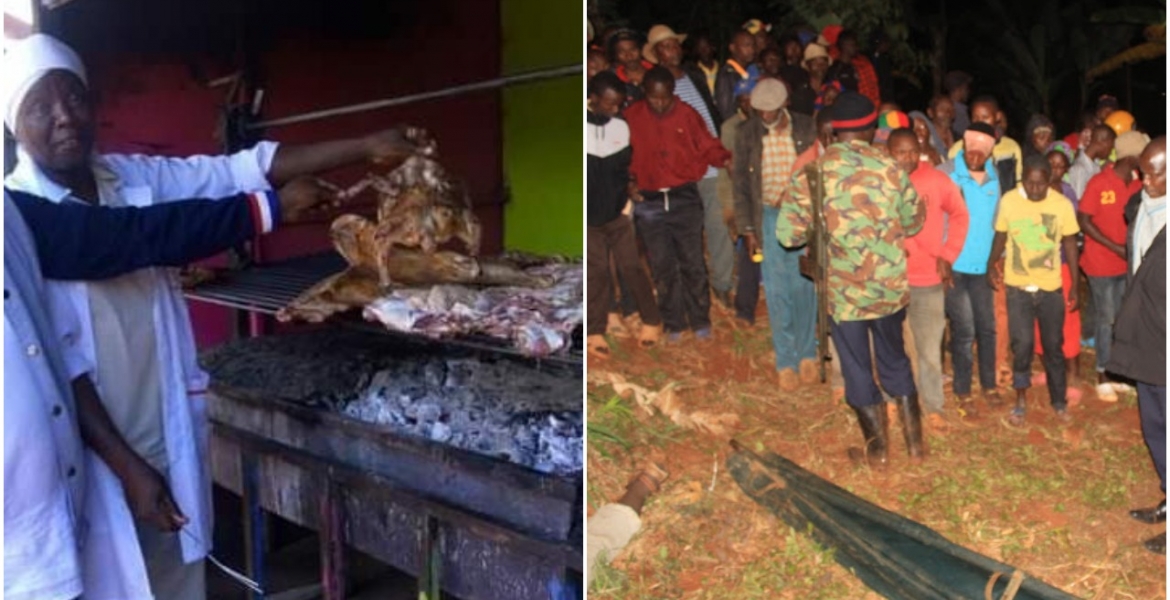 Police in Murang’a are searching for a 22-year-old man who murdered his 60-year-old father in cold blood before setting his body on fire.

Michael Muchiri is said to have waylaid his dad, John Mwangi as he returned home from work on Thursday evening and struck him on the head with a blunt object over an alleged family dispute.

He then poured petrol on his body and set it on fire before fleeing the scene, according to reports.

Mwangi, a resident of Muchungucha village in Kiharu, was a popular nyama choma chef in Murang’a town.

Susan Wanjiru, the deceased’s wife said she was alerted by a loud bang outside her house at around 7:30 pm and when she rushed out, she saw her son running from what appeared to be a huge fire.

She first thought his son was burning some banana leaves but when she got close, she saw a piece of her husband’s shirt and what appeared to be his body smoldering.

“I thought my son was burning banana leaves, but when I got closer, I saw my husband’s shirt, it was him and he was on fire (sic), I just ran away…,” she explained.

Confirming the incident, area Chief Wanjiru Mukami said police are pursuing the suspect who is still at large. She added that the suspect is likely to have been using drugs judging from his past behaviors.

The suspect’s sister, Joycelynn Wamuyu said her brother was accusing his dad of sidelining him and allowing farmhands to work at their family farm without consulting him.

Muchiri, who dropped out of school while in Form Two, had brandished a machete at his mother on a number of occasions in the past, according to the family. He also attacked his sister-in-law some months ago, dislocating her arm in the process.

Muchiri, not only did u kill ur dad, u had to really prove he was dead by burning his body. U my friend r a man that knows how to solve problems n i salute u, but u really should have used the little nugget in ur head as am sure u do not have a way out of this. I wish i could contact u n help u buy a rope n direct u to the best tree for u to bring this matter to an end.

members, may i confirm shaka is my name BUT not the contributor by the name of shaka on here......

i read the shakas response, good prose, but her endings makes me bite my tongue...and hit my head on the door,

i would never encourage no one to kill themselves, rather a life sentence...

just dont come after me yall.

members, may i confirm shaka is my name BUT not the contributor by the name of shaka on here......

i read the shakas response, good prose, but her endings makes me bite my tongue...and hit my head on the door,

i would never encourage no one to kill themselves, rather a life sentence...

just dont come after me yall.

Mr Outcast, i did not tell this man to kill himself but offered to buy him a rope n point to a good hanging tree. If u get someone drunk n he drives n kills someone u will not be the killer. Anyway this fool will die anyway as am sure the mob justice crew will catch up to him soon. Also its good to speak ur mind n be honest not like some people hia who act like they walk with Jesus. I do not agree with some of Guesty's comment but i respect the man for speaking his mind.

One more thing, to all the Outcast's out there, stop the Dr Phill crap. This man did noy only kill his dad but set his body on fire.I wish i was the one to throw the first rock during his mob justice. I would be proud of myself n if u don't like what i wrote fuck u n go to Church.

Shaka's suggestion is good because that useless/dangerous guy won't have killed his father if he had first hanged himself.He is not late as the Metumians will catch and kill him.Even the police will prefer to eliminate him instead of risking to go near him.