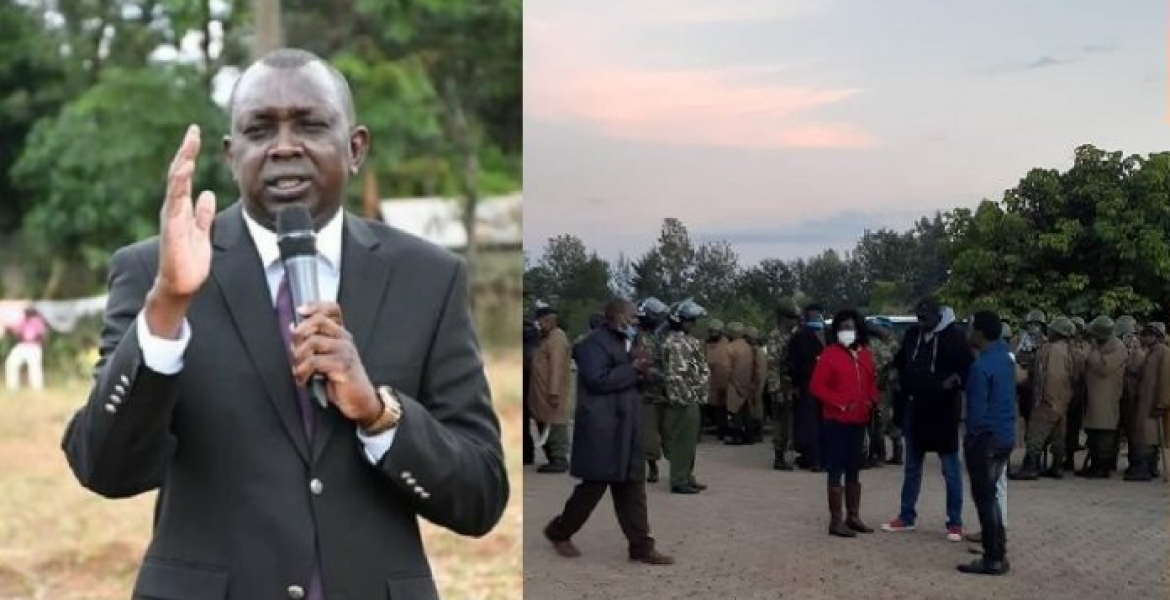 A plan by police to arrest Kapseret MP Oscar Sudi failed after irate youth blocked the road leading to his home in Eldoret.

Officers went to Sudi’s home on Friday night to arrest him hours after he addressed a public meeting in Eldoret town.

But hundreds of youths barricaded the road using trees and stones, allowing MP Sudi to escape before the officers arrived at his residence.

Police camped outside the MP’s abode for the better part of Friday night and Saturday morning, and at one point disconnected power and gained entry into the house but did not find him. The officers were forced to leave on Saturday after their mission hit a snag.

This week, Sudi has been on the spot over alleged insults directed at President Kenyatta, and former First Lady, Mama Ngina Kenyatta. His remarks sparked outrage with a section of women leaders demanding an apology.

Sudi made the remarks following the dramatic arrest of his Emurua Dikirr counterpart Johanna Ng’eno, who is facing hate speech charges. Ng’eno is also accused of using abusive language on Uhuru and his mother.

If you don't find the MP arrest the youths.

This evokes memories of the police officer who shot dead someone in Githurai, because he was a witness to his crime. I remember the name Katitu. While the residents were United in defending him, he had no right to take another person's life. There is also the possibility that he was a double agent. He was a Policeman, and knew the thugs. I think that they double crossed him, so he shot them both dead, before they could reveal their private dealings.

Freedom of speech is not just for a few fallen human beings in Kenya but for all fallen beings that are Kenyans. I pray that Sudi is kept in hiding until Monday.

Get this bustard off the streets and lock him up!! The country will never progress with idiots like this one being elected to parliament. He is just a pure mockery to people’s intelligence!

KABOGO ALIPELEKWA WAPI?
HE CURSED KIAMBU MOTHERS AND I DIDN'T READ ABOUT POLICE LOOKING FOR HIM.
WHAT'S THE DIFFERENCE BETWEEN MAMA NGINA AND KIAMBU MOTHERS.

Sudi I may not support your boss who is currently hiding under the bed without the balls to stand with you at this time BUT I love your guts. Your boss is a coward. Change bosses; thats how it goes.

What is so treasonable about what he said? Leave him alone rather than give him the attention he craves for. The Murathe crowd looks weak trying to arrest Sudi.

If you want to Insult Women, begin with your own Mom or Sisters, not someone else's Mother. Charity, including Insults, begin at home. Sudi and Ng'eno, you both have Mothers. Begin with them, before insulting Uhuru's Mom.