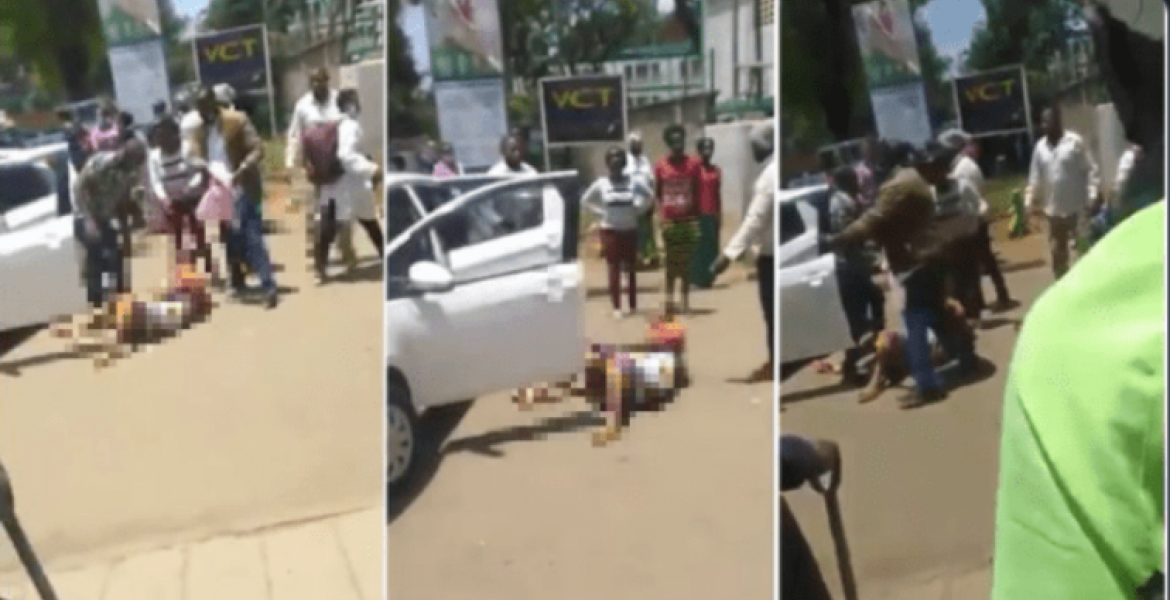 A video of a woman giving birth outside Pumwani Maternity Hospital’s main entrance has sparked outrage among social media users.

Reports indicate the unidentified mother delivered the baby outside the facility after she was turned away by some members of staff.

The clip shared online shows the helpless woman lying uncovered on the pavement in the sweltering sun and a group of people is heard asking nurses at the hospital for help.

Some women try to help by covering her using a piece of cloth to shield the newborn from the scorching sun.

“While Senate and Governors are busy fighting, women who expect services from hospitals like Pumwani are being turned away,” said Syombua Kibue, who shared the video on Twitter.

“This is not acceptable. Not in 2020 Imagine when citizens have to fight to get services at a government hospital.”

@challiewaziri tweeted: “The moment we tell people to vote wisely, they perceive you as an enemy. You advice people not to vote based on tribal inclinations but they consider you as a fool..You warn them against being bribed during elections but they ignore your advice. These are the consequences!”

@KiruiChebet8 wrote: “Don't know what to say am helpless 😥 Where are these female politicians & their supporters who were shouting about respecting mothers. Is it because her family status is unknown?”

@oscar_arthur1: “Pumwani hospital refused to take in a mother who was about to give birth. What a shame in a country where people can go to streets to riot about other people's mother's while their fellow women face rejection and humiliation. Shame on you all.”

In a tweet on Saturday, Nairobi Woman Representative Esther Passaris said the hospital informed her that the incident happened a week ago and that the woman was later attended to by nurses. She did not address claims that the mother was turned away.

Someone should ask Esther Passaris to get out of Anita Nderus bedroom & go help this mother. This is just atrocious and to know it is happening in a so called "God fearing country" is rather saddening. Just a few days ago an old man painfully died on a wheelbarrow trying to get to the hospital on an impassable road. Shame Shame Shame.

Someone should ask Esther Passaris to get out of Anita Nderus bedroom & go help this mother. This is just atrocious and to know it is happening in a so called "God fearing country" is rather saddening. Just a few days ago an old man painfully died on a wheelbarrow trying to get to the hospital on an impassable road. Shame Shame Shame.

Seriously, and an MP is in jail for calling out UHURU??
What's the difference between this lady and mama Ngina?

We worship the white god not the real God,until we go back to our roots we are doomed.

That was very unhygenic and dangerous for the in born baby. Government, please help cases like this.

I praise God that the woman was able to deliver. How many women are not that lucky. How many women come in with a need for emergency attendance and end up dying because of this ruthlessness?How many children die because senseless murderers deny their mother services. All those murderers, God is watching

Our cultures did not need fancy hospitals for our mothers to give birth. We were all born and raised in a respectable way without all these western medicine that requires high IQ's that turn away mothers because of money. We need our cultures like we need air to breathe. ( We are lost in foreign & strange cultures in our land).
May we all wake up to the reality. Where is our humanity? This a big shame to that hospital and its stuff.
Esther do not defend Pumwani hospital. It is time for Revelation and Restoration. All has to be revealed before we are restored to how God intended!!

Very unfortunate situation that could have been avoided,do we have mothers working at Pumwani hospital? Shame on those who heard the screaming & never attended to it,the tears we have shed will not be your cup of tea.