Uhuru Responds to Accusations of Militarizing the Country 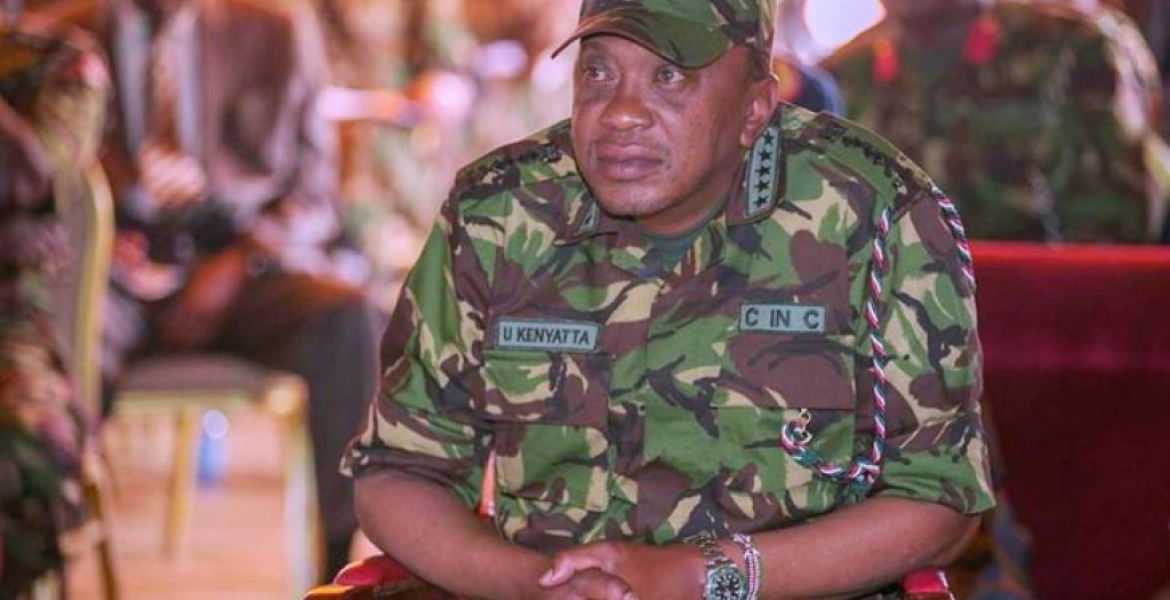 President Kenyatta has defended himself and his administration against allegations of militarizing the country.

Critics have in the recent past questioned Kenyatta’s decision to deploy Kenya Defense Forces (KDF) officers in civilian State agencies, terming it a dangerous precedent that could encourage a military takeover.

But speaking on Tuesday, Uhuru said the involvement of military personnel in service delivery was due to their professionalism, patriotism, and commitment to serving the country.

“I am not militarizing anything. I am using reliable Kenyan citizens to fulfill my agenda for this Republic. And the KDF are part of us and are also part of our citizens,” said Kenyatta.

“I have no such intention (militarizing the nation). But it is only a fool who would not use those who can perform to help him achieve his intended goals,” he added.

Uhuru, who spoke at the Nairobi Metropolitan Services (NMS) garage in Industrial Area, Nairobi, where he flagged off 83 refurbished vehicles, further urged Kenyans working in different sectors of the economy to emulate the efficiency exhibited by KDF.

“If all of us in Kenya operated and behaved; and loved and served their country in the manner in which our Kenya Defense Forces does, Kenya would today be a great country. And we all have a big lesson to learn,” he remarked.

The vehicles had been lying at the facility as scrap metal for years before NMS, which was established this year, repaired them at a cost of Sh22 million in two months’ time. They include 21 tipper trucks, 24 fire engines, six ambulances, three hydraulic street lighting platforms, two scrub street sweepers, and two graders.

NMS is headed by Major General Mohammed Badi, who was appointed by President Kenyatta to run key functions handed over to the national government by the Nairobi County government earlier this year.

Uhuru mentioned some of the projects that have been successfully implemented by KDF including the rehabilitation of old railway lines, the port of Kisumu, and restoration of ships.

They are PAID to do a job.

After El Adde killings and Manda Bay attack, you have to be a special type of stupid to think those soldiers and their families support the Kenyan government.

@guesty - what are you freaking paid to do except running your rotten 👄 (with lipstick 💄 on) like a girly man? You won’t even volunteer to take care of your ailing grandma; my damn foot! Got to hell and stay there. Don’t tell us what KDF is paid to do! No body asked you?!

You forgot “We need secession “

@ guesty don’t even know where he is going after he secedes! May be he is going Sugoi to hang out with his big teeth murderous boyfriend, Ruto!

Sonko was about to sell all those vehicles as scrap metal and pocket the money! No wonder kdf is taking over because those who claim to be citizens are stealing from left to right!!!

Let them take over, maybe they might do some good but someone tell me what does the military know bout meat apart from eating it. Kenya Meat Commission is under them n still don't get it Mr. Uhuru.

The military has multitasking training and are trained to accept change very quickly! KDF know a lot about meet processing because they are the first consumers before any product is displayed to the general public! They will do a terrific job managing Kenya meat commission!

Maybe our politicians should enrol in KDF first before becoming politicians.

They all should all serve in the military for one year upon being elected to have a clear understand of what service to the people is all about!

We diasporas support this move primarily to curb the corruption pandemic in Kenya. As the matter of fact now is time to expand the KDF and be more involved in every federal departments if not major projects. So yeas I support the Preso on this ideal which in the long term will even reduce our world-wide index rate of corruption - go mwana wa Muigai!

We should elect the military members to be the MCA, mo, Senator and governor! These positions are where the rampant corruption and theft of our coffers is mostly found! It will also cut the excessive salaries paid to the elected members? With this kind of structure up and running, DP Ruto will never steal again!

Lorren, Lorren, Lorren, God bless ur heart but u r an idiot. According to u the KDF is qualified to run the KMC becoz they know alot bout meat n r the first to test any product before it reaches the public. Who the fuck told u that n what hole have u been living in. My pet rabbit is laughing at that idiotic statement u made, what u gonna tell us next the KDF milks all the cows in Kenya. What u ought to do is take ur ass to Saudi Arabia as they love Kenyan idiots like u.