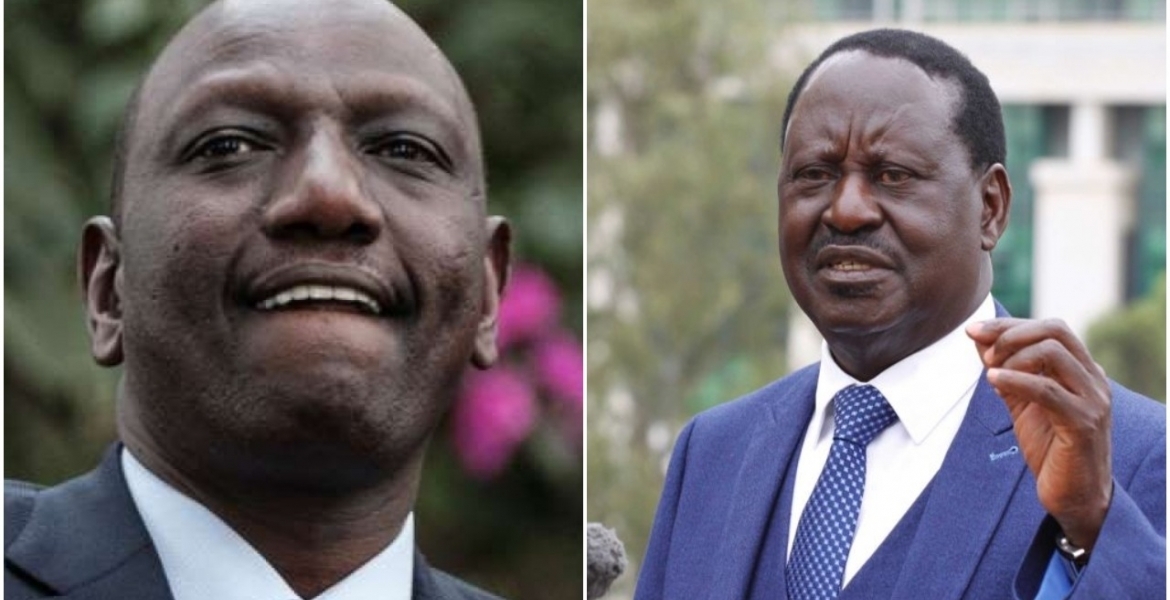 ODM leader Raila Odinga has challenged Deputy President William Ruto to resign if he is tired of working with President Kenyatta.

While accusing Ruto of sabotaging the government from inside, Odinga said the DP should be bold enough to step down like his late father Jaramogi Oginga Odinga did in 1966.

Jaramogi quit as the vice president when he disagreed with Kenya’s first President the late Mzee Jomo Kenyatta.

“When Jaramogi disagreed with Kenyatta on the issues of land he wrote a letter that said he found it no longer tenable to remain in government and he resigned. He had the courage and decency to say I am stepping aside because I don’t want to earn a salary and I’m doing nothing. So if you have a problem with your boss, take a walk! Get out of it!” Mr. Odinga said.

Odinga spoke on Saturday at his rural home in Siaya County, where he hosted a delegation of leaders and elders from the Mount Kenya region.

He also took a swipe at DP Ruto for opposing the March 9th, 2018 handshake which gave rise to the Building Bridges Initiative (BBI).

Raila also faulted DP Ruto’s recent program where he has been donating wheelbarrows and hand carts to youths as a way of empowering them, stating that tokenism and handouts are not a solution to unemployment.

I request that you stop any political meetings until 2022. The organizers of these meetings, have forgotten that the deadly corona viruses are still alive. It is amazing that the leaders of these meetings are not demanding the participants to wear face masks. Not demanding social distancing and the wearing of the face masks is endangering the lives of all those attending these gatherings.

I was surprised to see a medical physician Dr. Boni Khwalwale in a political meeting on the road without taking any precautions against the corona viruses!

Ruto has a poverty driven mentality. His sole purpose is to keep Kenyan youth below the poverty level! He could care less about their plight as long as they give him votes to protect his corrupt ways!

Ruto has yet to mature as a leader! The man of Sugoi does not have any leadership qualities for others to emulate!

Don't resign, don't quit!! Stay put but have an exit strategy when that ship called Jubilee split in half and start sinking.

You are a Masterpiece actor in politics synonimous with Johnny Depp in Pirate of Caribbean. Let that ship sink, it was invaded by Joyriders, bounty hunters, booty lickers, suckers and all other opportunists seeking a free ride to Canaan.

You will survive to set free the Hustler Nation.

Don't resign, don't quit!! Stay put but have an exit strategy when that ship called Jubilee split in half and start sinking.

You are a Masterpiece actor in politics synonimous with Johnny Depp in Pirate of Caribbean. Let that ship sink, it was invaded by Joyriders, bounty hunters, booty lickers, suckers and all other opportunists seeking a free ride to Canaan.

You will survive to set free the Hustler Nation.

Stop dreaming Ruto will never be president of Kenya.Uhuru needs to fire him at the end of the day he has the power to end this .He had no problem demoting and humiliating his minions even the MPIG Kuria has learnt to keep his mouth shut .Hassler nation my foot how do you hitch your horse on a thief and expect to go anywhere mnapelekana wapi na wheelbarrow most so called youth refuse to farm and flock to the cities in search of employment.You have forgotten about the elite in Kenya do you expect them to just sit back and let a hassler take over endelea kuota.

Did gen Mauti resign in 2008 when he started the 2012 presidential campaign after he won the title PM(PRIME MURDERER)?After all is there a govt to resign from or just a team of thugs led by Uhuru and including muchawi Raila on looting mission from their billionaire fooled employers who follow them like kodoo?The Gikuyu thugs led by human CHEF Maina Kamanda had gone to claim payment for killing two people in Murang'a last week.

This old lord of poverty will be made nothing by 10am one 2022 elections.Tutafukuza yeye kisumu for good.Sisi hatuwezi elect useless stinking economic saboteurs/killers in that house at the hill.Raila mambo yako kwisha n if I were u siwezi njiaimbisha

Ruto must have a lot of stolen wheelbarrows that he is now freely passing on to the youth. I blame the Kenyan youth for allowing a whole deputy president reduce them into beggars. This is equivalent to buying the youth some busaa for some votes!

Since when did a wheelbarrow convert into a job? Ruto is just encouraging more theft using the desperate youth. Ruto calls the youth hustlers because that is what he is converting them to be - just thieves like himself!

Where is the employment for the youth Ruto? Teach the youth how to fish so they can be self sustaining when you go to jail for everything you have stolen.

BBI will not solve problems facing Kenyans either.

Kenya was all set for looting & corruption by Wakoloni collaboraters the moment Freedom Fighters surrendered their weapons in exchange of economicless freedom. They were mischievously outsmarted by Jomo who never honored the terms of surrender agreement at Ruring'u standium in Nyeri in 1963.

Her majesty the Queen Govt in London made sure that Jomo never honored that agreement with the so called "terrorists" back then.

Neither committing nor fulfilling that agreement became the hallmark of Jomo's Govt. It continued to be perfected both as a Govt policy as well as a political tactic from then until now.Land resources were grabbed and dished to who was who in the Govt. Equally too were corruption and favourism to those who were royalists to the new Nation.

Kenya ended up becoming a nation of 10 millionaires and 10 million beggars as GM Kariuki perfectly described. It is a lesson learned from the mistake of the past. US of A will never ever negotiate the 2nd amendment for anything! Because the forefathers knew the price of freedom after the War of Revolution against Great Britain.

So, when a revolution come around, don't trade your arms for anything.

Expired jambazi JM Kariuki(who once was expired jambazi Kenyatta's private secretary) was a corrupt land grabber.He coined the slogan-TEN MILLIONAIRES & TEN MILLION BEGGARS just like "CORRUPTION FIGHTER" Raila who is also a professional LOOTER & KILLER.These are useless people who never helped Kenyans achieve anything other than POVERTY and DESTRUCTION.