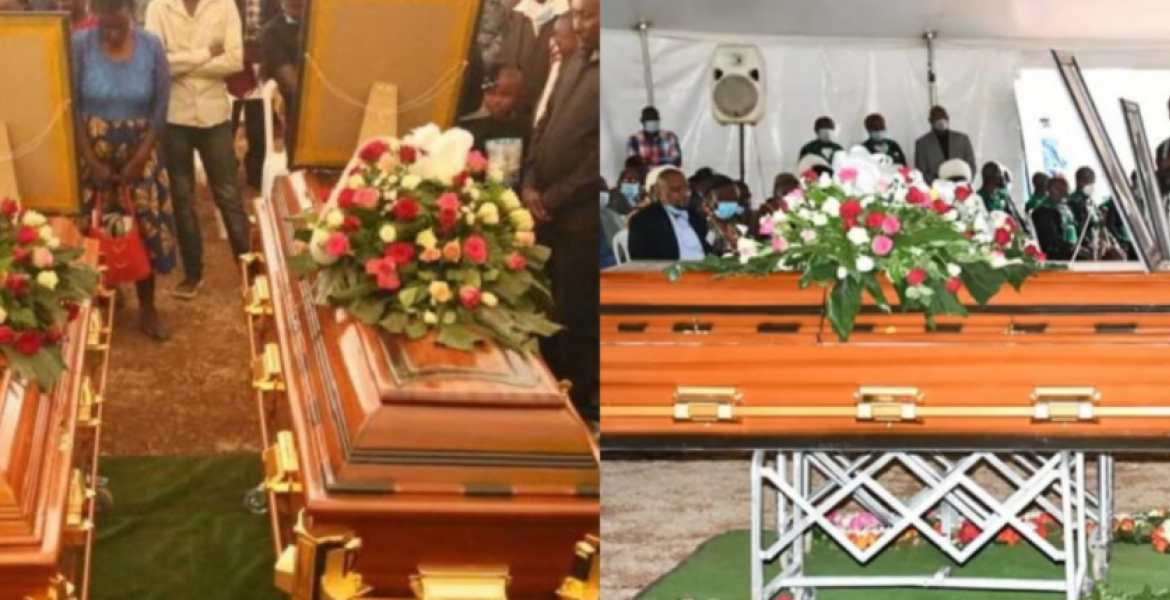 Two young men killed during the October 4th political violence in Kenol, Murang’a County have been laid to rest.

The joint funeral service for the two, 15-year-old Peter Mbothu and 21-year-old Christopher Kariuki, was held at Mt Kenya University grounds in Thika on Friday. Their bodies were later transported to their families for different send offs.

The two were killed after two rival groups clashed ahead of Deputy President William Ruto’s visit to Kenol town, where he graced a fundraiser at AIPCA Church.

During the funeral ceremony, youths were asked to resist from being used by politicians to achieve selfish gains.

“We will not be used again. There is no other day that we will find ourselves in such a situation. This boy died while young,” said Kariuki’s brother, Francis Kariuki.

“We were raised by my father here and he told me to take care of him and teach him how to fend for himself but the devil came in.”

Politicians were barred from addressing mourners at the ceremony attended by Kiambu Governor James Nyoro and former governor William Kabogo.

“We have to respect the families of the deceased who sought to have no politician address the mourners,” said Stephen Karau, a member of the Kikuyu Council of Elders.

Ruto’s dirty hands are covered with the blood of the innocent dead men!

REVEGE for the two is a MUST.The relatives of the two guys should not wait for police commanded by Uhuru for justice,NO.No one should expect Nzioki & his force to arrest Kina Sabina,Kamanda,waIria,Murathe etc.Nzioki has not arrested Kamanda for poisoining Gikambura residents two months ago.

You should be arresting Ruto or take the revenge directly to his Sugoi home @menye! You are trying to arrest the wrong people. And Ruto is pleased that you are equally stupid to know his hand in killing Kikuyus! This is not the first time Ruto have killed!

Ruto thrives in bloody environments. You have not seen it yet! The con man will destroy Kenya using religion as the opium of the masses! This man does not know God but he hides in the scriptures just like Hitler or Mussolini did.

Ruto holds on grudges in bigger measures than he kept loyalty! He can never be a leader! This is the major part that Uhuru have scorned with passion about Ruto. It is all about Ruto’s greed, and no body else; 👶 babies included.

RIP KIDS.
Why hasn't the government charged RUTO with murder?

Politicians should not be allowed to politicize or take advantage of a gathering of mourners to score "cheap emotional political points".Afunneral is not a political rally,but a gathering to remember,pay tribute, commiserate,mourn,and hopefully honor the life and family of the departed.
Politicians should create their own gatherings void of emotion s that acompany funerals.

My heart goes to the families of the fallen young souls. Their souls will forever haunt the shadows of Maina Kamurder, Saitina Chege,Hasira mingi Matirany,and others who planned chaos in Murang'a on that fateful day.May your Children also live long enough to never meet the same fate!!!