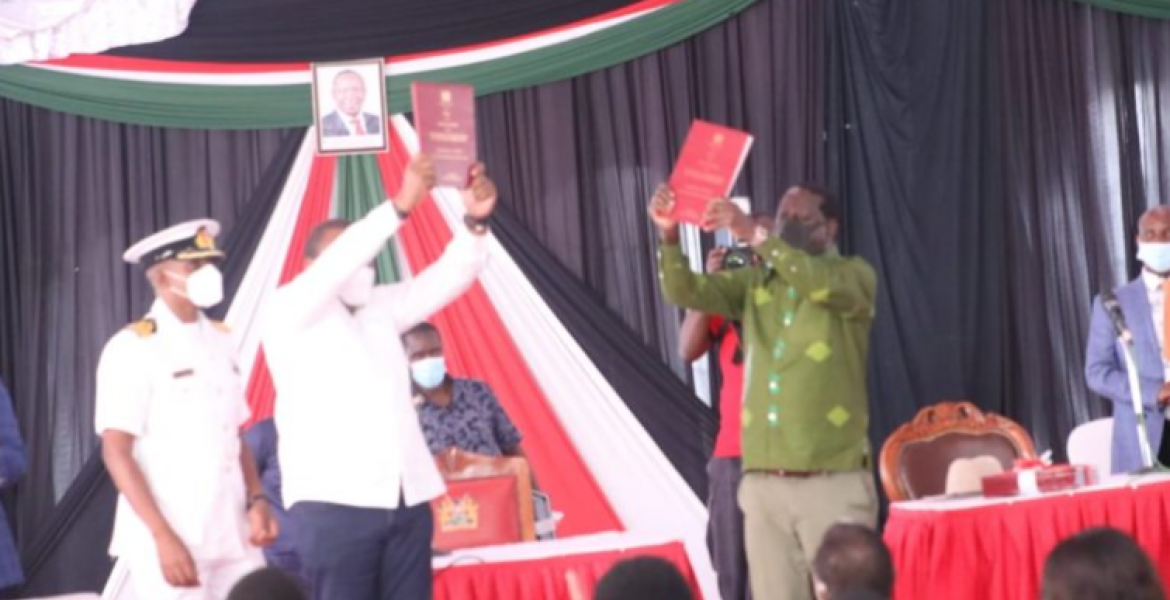 The 204-page document was handed over to the two leaders by the BBI taskforce at Kisii State Lodge on Wednesday morning.

The report, which will be officially launched next Monday at the Bomas of Kenya in Nairobi, has made a raft of recommendations including the re-introduction of the Prime Minister position.

The report recommends the abolishment of nominated seats in both the Senate and the National Assembly.

The Woman Representative seat in the National Assembly will be scrapped but political parties will be required to meet the two-thirds gender rule while submitting their lists to the Independent Electoral and Boundaries Commission (IEBC).

Each of the 47 counties will elect two senators, a man, and a woman. Nomination slots in the County Assembly reserved on the basis of gender parity will only be given to people who lost in the just-concluded election.

The Prime Minister will be nominated by the President from among MPs, and from the party with the majority seats in the National Assembly. The PM will only earn one salary

Based on the population, some constituencies will elect more than one MP to ensure equitable representation.

The compression ratio for allocation of resources will be reduced from 5 percent to 3 percent, meaning the county with the highest share per person should not have 3 times more than that with the lowest.

Further to this, the report proposes the youth be given a seven-year tax holiday once they establish a startup business while graduates will be given a four-year grace period for repayment of HELB loan from the day of graduation.

It also recommends the establishment of a Youth Commission as a constitutional commission to ensure the mainstreaming of the youth perspectives in planning and decision making.

Further to this, the taskforce recommended the county allocation be increased from 15 percent to 35 percent of the national budget.

To take development resources to the grassroots, there will be a Ward Development Fund of 5% per ward of all the county governments’ revenue.

Where is Ruto!? He i

This BBI report needs to be rejected by Kenyans.

Where is Ruto? You get exempted when you make yourself absent without leave! Maybe he is hunting on more wheelbarrow boys! Ruto’s arrogance will dearly cost him in the end!

Man Ruto is out of sight! Where is the Sugoi man?

DP Ruto is digging his own Political grave fast!

What do these Women do for Wanainchi for Real?

Carry you in their belly and give birth to disrespectful men like you!

BBI is mostly garbage with a few gold nuggets. What is the logic behind nominated MP's and woman reps other than as rewards to nobodies

DP Ruto read a message of condolence to the MCA Late Choba sent and written by the president!!!!!!!!!!

Kenyans should reject this poop document and demand the reduction of the bloated,non-performing govt by half.I wonder where money for additional seats will come from.The useless document means more poverty as hungry billionaire Kenyans will continue taking more expensive loans to pay salaries.More loans will be taken to finance the ward fund.The ward fund means more corruption and creation of billionaire MCAs but codemning millions of Kenyans to beyond poverty lines.

As much as your comment my sound thoughtful, if followed it would yield negative results. All developed countries, people have adequate presentation. For a country to grow people need proper presentation from the grassroots up and same way resources must trickle down from up to the grassroots. This can only happen when there is adequate presentation whicThe problem with Kenya is the quality of the leaders elected and their goals of leadership. Their leadership is not people oriented but it’s geared towards personal gain and that’s what need to be done.

1. Youth means everyone according to article 260 of the Kenyan constitution.

So saying that everyone who starts a business going to get a 7 year tax holiday sounds like a lie.

2. Prime minister post should be removed. That not inclusion

3. Youth commission is obsolete because Youth is everyone in kenya. There is no target group called youth, it’s not defined by the constitution .

4. MPs based on population? Why? That’s seems to be a way of silencing small tribes.

This is just another way to fool Kenyans.
This is just a way to contain Raila until the general ELECTIONS.
We have to understand that UHURU and RUTO were schooled by the professor himself MOI. This two are still married. This is just KANU at it's best.
The worst part of this is people will die after Raila loses in 2022.
With BBI report out.,political PARTIES will start merging with promises of prime ministers positions being offered as baits.
Let's wait and see.