Raila Dismisses Claims That BBI will Bring Back Imperial Presidency 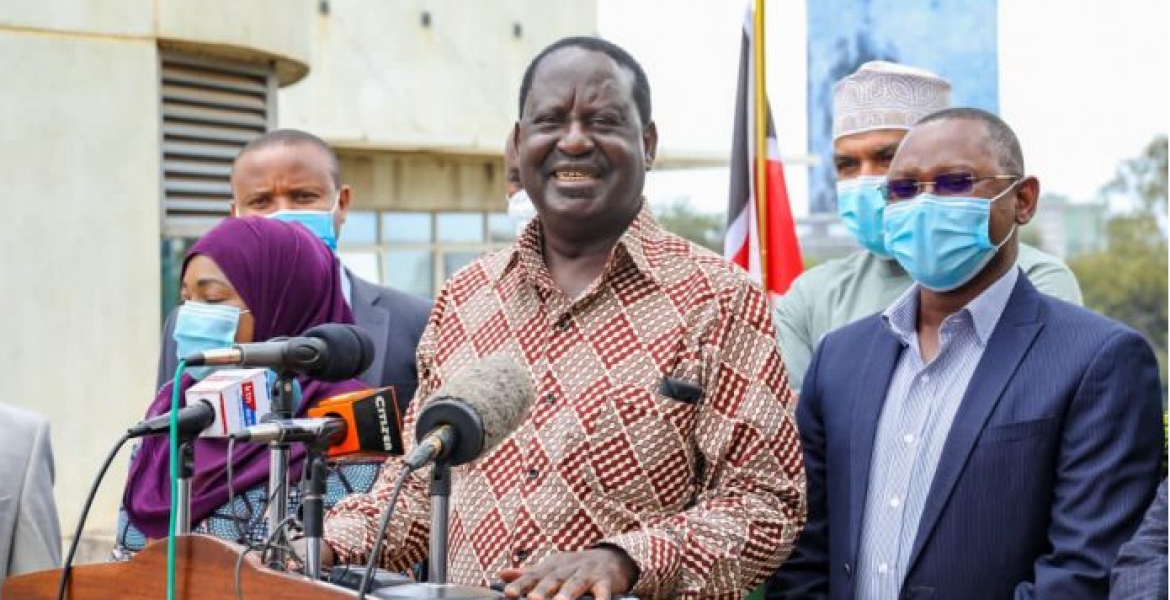 ODM leader Raila Odinga has dismissed claims that the proposals contained in the Building Bridges Initiative (BBI) report will bring back imperial presidency.

Speaking in Kisumu on Sunday, Odinga termed the claims as propaganda, adding that he would never be a party to any amendment which recreates imperial presidency.

“There is propaganda being spread on the BBI. I have seen the allegations that this draft amendment is bringing back Imperial Presidency,” Odinga said.

He added: “I have been part and parcel of the struggle for reforms and change and I will never be party to any amendment which recreates Imperial Presidency.”

Odinga further discredited assertions that the BBI recommendations will lead to a bloated government and explained that the Prime Minister and his deputies will earn one salary as MPs.

He also defended the proposal to create the office of Ombudsman, saying it will not interfere with the independence of the judiciary as alleged by BBI critics.

“Judiciary has been compromised, sometimes, that there have been judges on the take, making rulings that are not in accordance with the law,” Raila said.

“That’s the reason why this office is being created…that we now have an institution where ‘wananchi’ can go to make their complaints.”

Raila is so blinded by becoming president that he will do anything to achieve it.
This is a way of bribing other leaders with promises of prime ministers and deputies.
But this BBI has nothing for the common mwanainchi. It's for the chosen few..
UHURUS, RAILAS,MOIS,KALONZOS,MUDAVADIS ETC..

It appears Raila Odinga has not read the BBI report.

1. Kenya does not need a Prime Minister position or his assistants.
2. There mechanisms in place to deal with rogue judges.

This BBI report is the reason why we need Secession.

The current Kenyan government cannot even implement the Kenyan constitution in full.

Amending a constitution that has not been implemented. Shame on all of them.

Secession is the future . Embrace it.

So Kenya will have 70 more MPs plus 2 more as deputy prime ministers and top it off with a prime minister a president with deputy too!! What a bloated government.
Addition of these office holders will not help Kenyans rise from the stagnation of poverty but will hell further into impoverishment.
This is not even a course to advance given the recent vast spread of Covid-19 . And given that the government is giving up on the poor patients for luck of money.
Transfer all nonsense BBI money into Covid 19 relief fund. To help the poor get treatment.
Stop being selfish and look after the wananchi.

The proposed amendment of Article 10 a goes against the East Africa Community treaty.

BBI is in violation of the East Africa Community treaty.

He's Mombasa Republican Council and he can secede to Zanzibar or Oman, where he came from

Kenya's Secession first victims will be muchawi Amollo and his worshipers most of who work in Industrial area,Nairobi.Muchawi and his family will be forced to surrender all properties grabbed in Nairobi and Kiambu counties.Guesty barks secession from her Philidaphia city residence yet she never travels to Nyalulunga for fear of being sacrificed by muchawi to his Boston gods.Watu wengine ni wajinga kweli.Ati to secessed so that Raila becomes the third Luo president in the world-RUBBISH.It is the same stupidity Uhuru is wasting billions to amend the katiba to tame muchawi Amollo instead of fighting COVID-19.Swali ni-What will happen if both gangsters Uhuru & Amollo are swallowed by COVID-19 or do they have impunity?Hungry billionaire Kenyans should reject the amendments as they will increase taxation/cost of living.