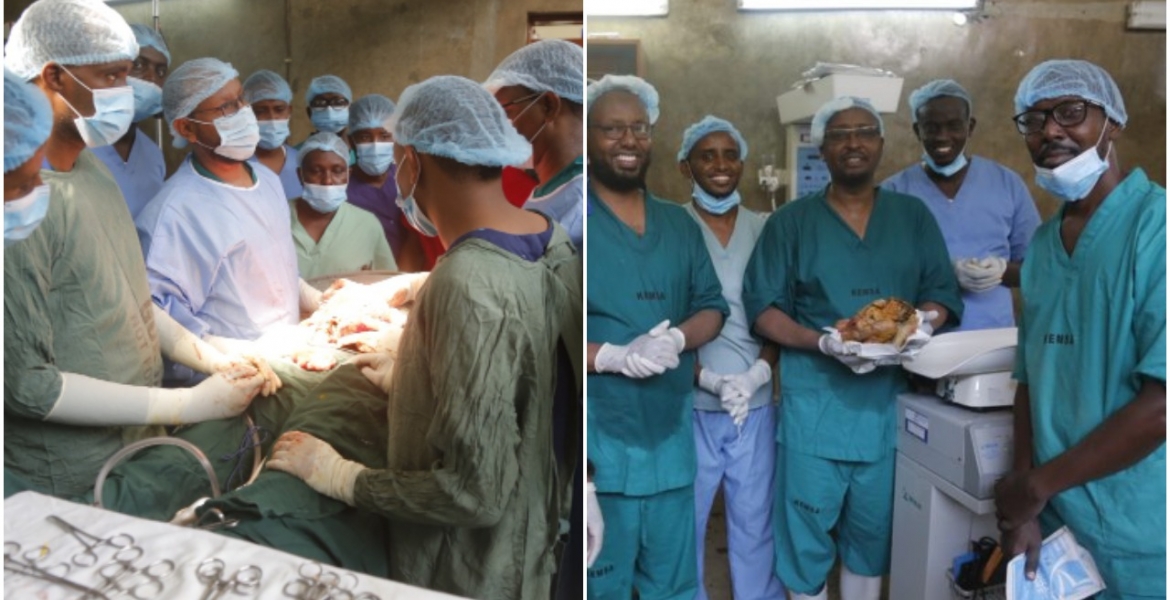 A team comprising 15 medical specialists performed the delicate procedure on a 31-year-old Ethiopian woman identified as Hawa Adan. Hawa was suffering from intra-abdominal calcification, a condition she lived with for the last 13 years.

She had visited many hospitals in her country without getting a proper diagnosis until she crossed into Kenya in September where doctors at Mandera County Referral Hospital discovered the cause of her swollen abdomen.

A CT scan revealed she had lithopedion, a rare condition characterized by an intra-abdominal calcified dead fetus. The condition occurs when a fertilized egg grows in the fallopian tube instead of the uterus.

The fallopian tube only allows the fetus to grow to a certain limit after which it will rupture and be discharged to the abdominal cavity. In most cases, the fetus dies as a result of the harsh extra-uterine environment.

In Hawa’s case, the fetus developed in the abdominal cavity past 30 weeks and it died. On Tuesday, doctors at the hospital managed to successfully remove the 13-year-old stone baby together with the placenta and a cord weighing 1.75kg.

“Hawa was operated on and delivered a stone baby successfully. After closer scrutiny, it was a male infant, complete with placenta and cord weighing 1.75kg. She is now recovering at the surgical unit of the hospital,” Mandera Governor Ali Roba, said in a statement.

Hawa carried two babies to full term previously but lost them both four weeks after delivery.

“She said she felt all the symptoms of pregnancy but after three months they disappeared. The surgery was successful, when we dissected the lithopedion, we found a dead baby, fully formed with organs, hair and we could easily tell it was a male,” said Dr. Abdiaziz Mohamed, who was among the team that conducted the operation.

Great News and this is what Wanjohi need to be reporting. Please can we have them Doctor given some of the Covid Money Health minister stole yaani kagwe and send them to a vacation. Kenya has some of the BEST briliant mind but government frastruate them all.

Great job doctors.
We have a lot of great minds and brilliant doctors in Kenya, but greed is the problem. Pesa first. Any hospital should be able to perform any specialized surgery, but we know that equipment gets stolen or destroyed to pave way for private clinics.
Hopefully HUMANITY will kick in eventually.

Even if the equipment is available the doctors don't use them instead they refer the patients to their clinic or due to lack of treatment patients turn to private clinics which belong to same doctors the doctors inform the patients they have to look for a bed in another hospital since their clinic is not well equipped . at the hospital where they make a deal they charge for the bed and of course their work that is what happened to my father by the time a bed was available in MP Shah hospital he died . it is very frustrating unethical act by them medics whose interest