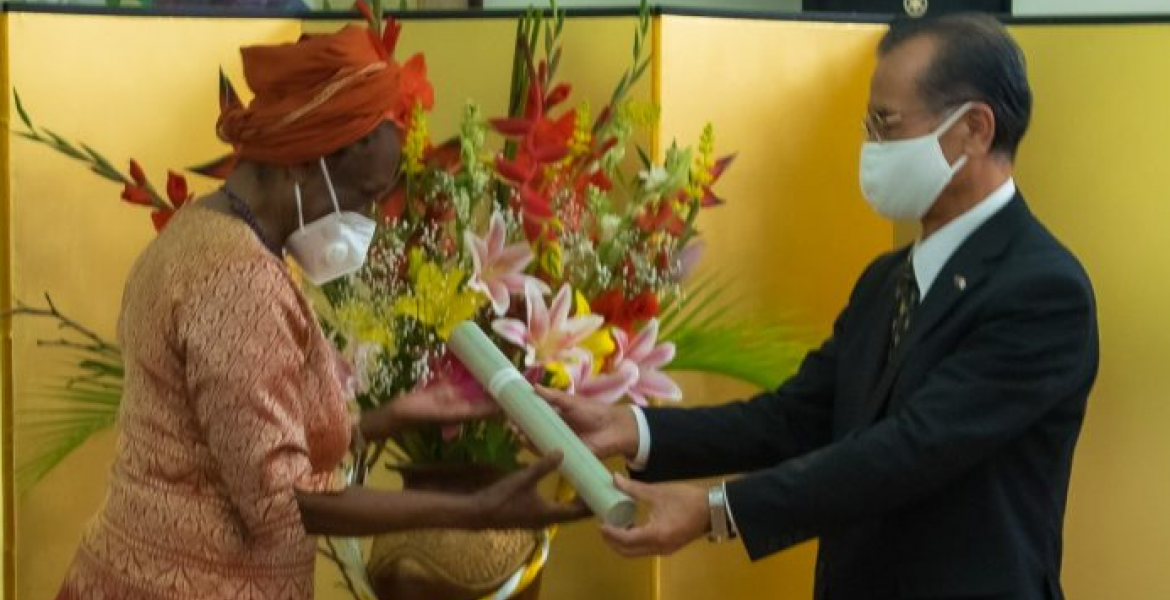 Renowned Kenyan scholar Prof. Miriam Were has been honored with Japan’s highest order for her contribution to the development of global health.

Prof. Were was conferred with the Order of the Rising Sun, Gold Rays with Neck Ribbon by the Japanese government.

The award was presented to her by the Japanese Ambassador to Kenya Horie Ryoichi following the conferment by His Majesty the Emperor of Japan on 29th of April, the 2nd year of Reiwa (2020).

Ambassador Horie described Prof. Were as an example of women leadership, “which inspires and encourages young women all over the world as well as the recognition of the importance of global health development in dealing with the current pandemic.”

Prof. Were has also played a key role in cementing Kenya’s relations with Japan in the areas of health and human exchange.

This is the second time the former Moi University Chancellor is being awarded by the Emperor of Japan. In 2008, she was awarded the first Hideyo Noguchi Africa Prize.

Prof. Were has previously served as the Chair of Kenya National AIDS Control Council, Chair of the African Medical and Research Foundation Board (AMREF), member of the Board of the Health Workforce Alliance, and member of the UN Secretary General’s Independent Expert Review Group (iERG) for Women’s and Children’s Health.

She currently serves as a member of the Champions of AIDS-Free Generation in Africa and the co-founder of UZIMA Foundation-Africa which focuses on youth empowerment.

Prof. Were started off as a high school teacher before joining the University of Nairobi to study medicine. She later worked as a Medical Officer in the Ministry of Health.

She was also a lecturer at the University of Nairobi Faculty of Medicine, Department of Community Health.

She holds a PhD in Public Health from Johns Hopkins University in Baltimore, USA.

Congratulations to my teacher. God bless her.

Kukhu...you have done Kenya wonders.... since the sun is part of solar, I could crown her with the "Order of Solar System"....but let's accept what has been bestowed upon her. Kukhu you are now beyond the sky. Long live kukhu.

Kukhu...you have done Kenya wonders.... since the sun is part of solar, I could crown her with the "Order of Solar System"....but let's accept what has been bestowed upon her. Kukhu you are now beyond the sky. Long live kukhu.

Congratulations to Prof. Miriam Were my Teacher. You have done us proud by being awarded that honor. May God's blessings continue following you.