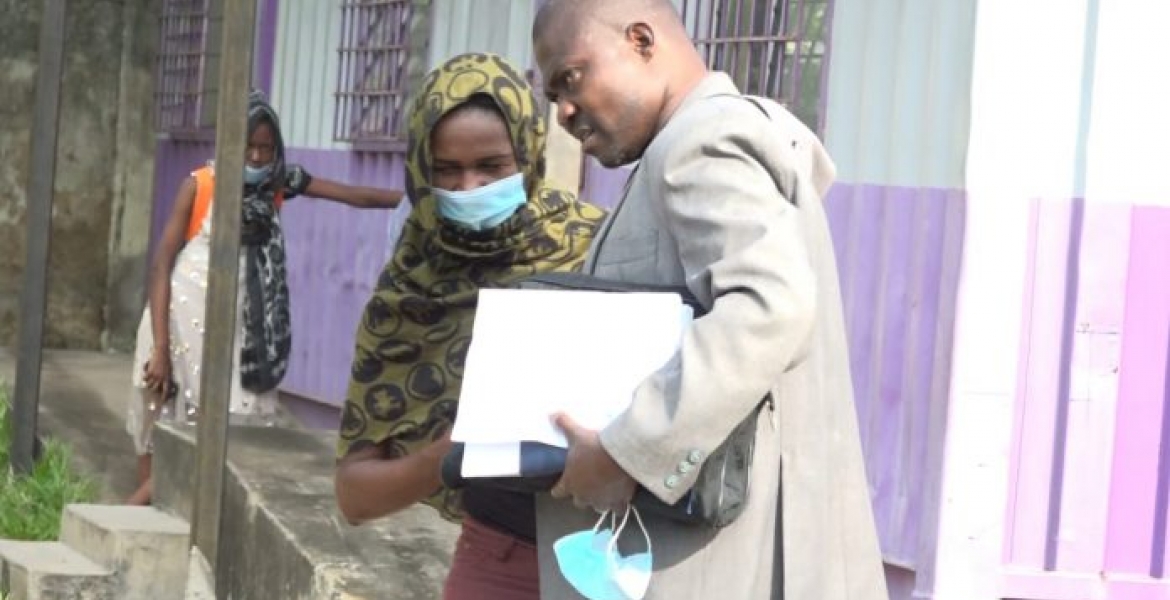 Maria and her lawyer Geoffrey Were

A Kenyan woman is entangled in a child custody fight with her former boyfriend who is a British national.

Hellen Maria Imokor is said to have met Kevin Barry Hurley, a former police detective attached to the Scotland Yard, during his visit to Kenya in 2016.

Barry had come to Kenya as a tourist and met Maria in Diani after which their relationship blossomed leading to the birth of a baby boy in 2017.

In 2019, Maria filed a case at the Mombasa High Court seeking child maintenance for their son from Barry.

But in a fresh turn of events, Barry filed a lawsuit seeking custodial ownership of the three-year-old boy claiming Maria has denied her access to his son.

This forced Maria through her lawyer Geoffrey Were to seek a court injunction constraining Barry from taking over the custody of the boy.

High Court Justice John Nyabuto ordered the child to remain under the custody of Maria but granted Barry daytime care of the boy. He will access the child during the daytime till mid-December when he is expected to travel back to the UK.

“The child’s pick-up point will be at the Tononoka children’s court in Mvita constituency,” the judge directed.

Justice Onyiego directed the sub-county children’s officer to supervise the daily handing over of the boy between Barry and Maria.

Maria is required to drop and hand over the child at 8 am at the lower court and pick him at 6 pm daily.

I can bet the Kenyan woman does'nt have a stable income, so she had to hatch a scheme to tie him down.

What scheme now? The penis is a man's...he has all authority to cover it, layer it, sweater it or even choose which hole it enters. Ujinga ya kulaumu wamama tutaacha.

Seneca yaye. The story isn't a out you. Neither is it designed to unleash another round of gender war. It's about child custody. Both parents are trying to own the baby. It's not about the man's pecker gone wild. Your response would be justifiable if the man contesting whether or not he's the biological father. That's not the case here though. The woman being covered in the story is not a victim of rape and so the tirade you're unleashing on the man or men isn't totally uncalled for.

I hope this guy will not traffic the child out of the country. Why even involve him? Clearly he is not interested in the child who was born there years ago. Chunguza yeye kabisa.