BBI is the Answer to Kenya's Problems, President Uhuru Says 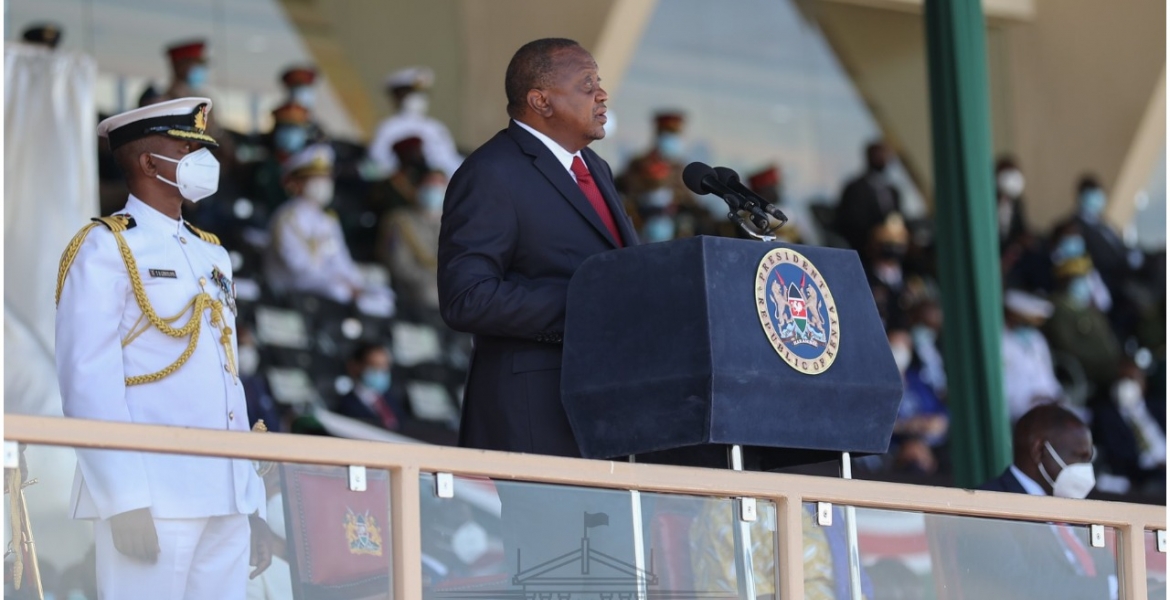 President Kenyatta has continued to urge Kenyans to rally behind the Building Bridges Initiative (BBI).

Kenyatta insisted that BBI, which will culminate in a referendum to introduce changes to the 2010 Constitution, will provide solutions to some of the problems stopping the country from making meaningful progress.

“I appeal to all within our nation to unshackle our nationhood from the bondage of fear; and to boldly seize this moment of hope. It is time to embrace hope,” said Kenyatta.

He termed the historic March 2018 handshake between him and opposition leader Raila Odinga as a temporary solution to a long-term search.

“The ‘handshake’ was a temporary solution to a long-term search. Our joint intention was to have BBI provide us with a roadmap to a long-term solution. And even then, this solution was not to become an end in itself. It was meant to be a continuous work-in-progress,” Uhuru added.

Kenyatta, who spoke during the 57th Jamhuri Day celebrations at Nyayo Stadium on Saturday, added that the handshake was biblically inspired and opined that it will become “our new normal.”

“More so, because at the core of the handshake were the words of Prophet Isaiah when he declared: “…Come, let us reason together!” This mantra of rivals reconciling and reasoning together in the interest of the nation, is what led to BBI,” said Kenyatta.

“And if this ‘handshake’ endures, I anticipate it will become our new normal and many future BBIs and ‘handshakes’ will continue to refine our nationhood and ensure that we dwell in unity, peace, and liberty.”

Uhuru must be told his useless/expensive BBI is GHASIA/TRASH without the rule and TOTAL enforcement of law to all.BBI ni MAVI if the likes of Wanjigi,Raila,Kenyatta family,DRUGLORDS who fund POLITICAL PARTIES,MPs,other elite thugs and their families remain ABOVE THE LAW.A big NO,NO. that BBI means Raila cannot be punished for killing 1300 people,NO,NO,NO.Uhuru should forgive Raila in advance and sign an agreement to kill him but not my expired relatves killed by Raila.

Nonsense Mr president.Bbi will never finish kenyans problems.Cheap unga/food/electricity/jobs/security/free schools from nursery- urniversity is the only good things which we wants m will stop our problems we facing everyday.Anything else is pure nonsense n stupidity.

Not true Mr. president! stop enriching your selves at the expense of kenyans

BBI is not and will not be the solution to Kenyan problems as stated by the president. Mr. president and your honchos please stop lying to your country.
BBI is not a business enterprise ( perhaps it is for your small group). It will not make money for the masses of Kenyans but a few. It actually drains more money from the exchequer. It will make Wanjiku two fold more poorer than it’s now.
Kenyans needs a cut in numbers and salaries from the existing bloated government not the vice versa.
The borrowing is stretching into trillions yet the government seems to be looking for BBI to solve this problem?
Even without this pandemic, ordinary Kenyans were finding it hard to meet the very basic stuff as food and medicine. And it’s not because they needed BBI!
Rewarding an election loser is not an economic value. Just do a fair elections and should be customary not only in Kenya but the whole world that when you loose elections, you just have to bow and go home.
Furthermore, right now, there’s nothing hindering development in the country, not even BBI,other than stealing, corruption and officials seating in the office doing nothing.
Even if we assume that BBI has some “good things” in it, why the rush. Why spend 14 billion for an exercise that could have been done together with coming general elections. And maybe invest the 14 billion into the youth program or divert it to cover the stolen COVID money!

More like come let us “eat together” forget the regular folk.It is time that this two leaders retire from politics for good.As we speak we cannot afford to pay the current governors who keep asking for more money what makes you think taking the government to the people by creating more opportunities to steal will eliminate poverty and unemployment ?The choices for 2022 look bleak either vote for these greedy power hungry thugs or a land grabber who pretends to care for the people.
There is money to implement BBI nonsense and no money to pay doctors or provide PPI.Go home and take your handshake buddy with you .Surely there must be a candidate willing to challenge Arap Mashamba 24 years of Moi rule was enough we cannot afford to make that mistake twice.

No. Jesus is the answer. Enforce rule of law impartially and we good. Many countries without democracy like China, Rwanda ard 1st world without BBI

Yes...we will all be fine when we give jobs to all greedy, useless fatcats to feed on the top layer.

Builder, if Jesus is the answer, what's the question??

Question is SIN of Adam. Before he sinned there was no BBI, corruption, handshake, filth etc