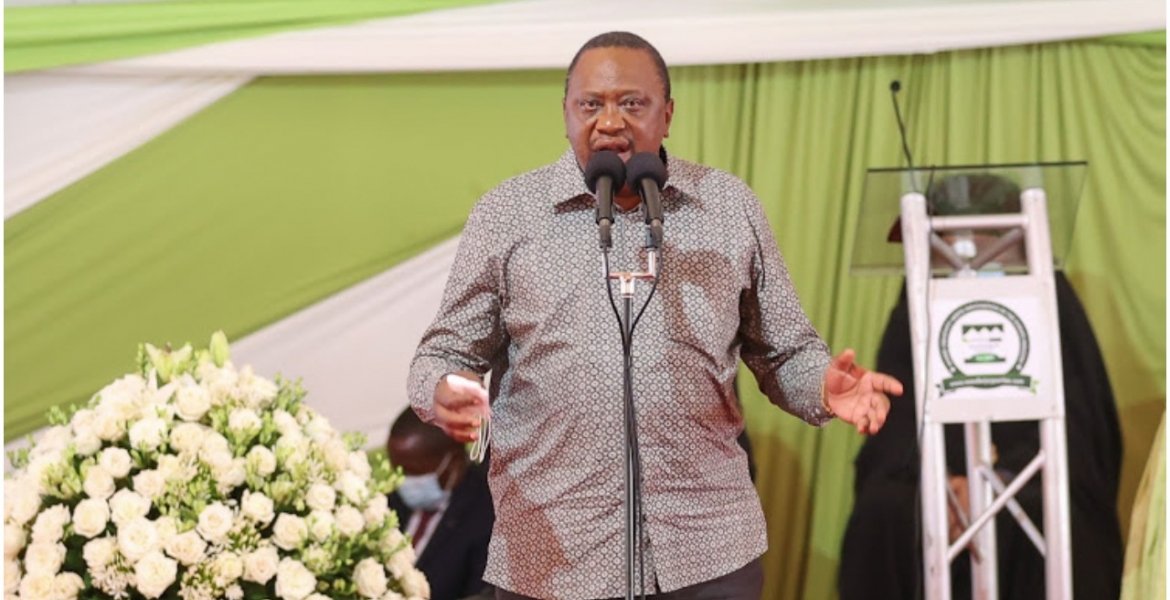 President Kenyatta has poked holes in the dynasties versus hustlers political narrative stating that Kenya is a democracy where leaders are elected.

Uhuru who spoke on Saturday during the burial of ANC leader Musalia Mudavadi’s mother Mama Hannah in Vihiga castigated those advancing the narrative, saying they should seek leadership by selling their agenda to Kenyans.

He insisted that none of the country’s presidents including himself inherited the position hence the dynasty tale does not hold water.

“Leadership positions are not awarded, leaders are chosen by Kenyans, it is therefore wrong to, if you say you are tired, you are free to seek mandate from the people, let us respect each other as it is the only way to build a strong country,” he said.

He added: “Some of those who said they are tired (of dynasties) got to where they are because of my vote. They did not get a single vote.”

Uhuru argued that if the same rationale is to be applied, the two communities that have produced presidents since independence should allow others to lead.

“I can also say that there are only two tribes that have occupied the top seat, perhaps it is time for another community to lead,” said Kenyatta.

At the same time, the president stated that he is in control of the government does not need “lecturing through letters from anyone.”

He appeared to be referring to Murang’a Senator Irungu Kang’ata who wrote a letter warning him that the Building Bridges Initiative (BBI) was unpopular in Central Kenya.

“I am in charge of this government and I am in control of what we are doing. I do not want anyone to lecture me. I know where I am and I am very clear about where I am going.”

“No one will stop me in my quest to bring Kenyans together because that is the most important thing,” he added.

Ruto is not mentally and morally fit to be the next president of the Republic of Kenya! The man is the worst thief ever and a severe threat to our security and internal affairs.

Ruto has killed enough Kenyans. He is full of anger and range and he is destined to take Kenya to the annals of burning hell.

I agree with Uhuru that it is time for kikuyu and Kalejin communities to let others taste the reigns of power! We can lead Kenya and do even better!

Kenya needs a strong and decisive leader right away. Not power tasters. There should not be room for anyone who want to taste power period.!!
Ruto is more fit to run for president mentally and morally. For those nay sayers, please take him to court if he has stolen any of your chicken.

Ruto sits on the hedge fence with all manner of indecisions nearly every time the country’s security is at stake! He is the biggest coward anyone can remember!

Yes morally at his best. Mortally I have no clue what that means.

Everything you have said is the hallmark of Ruto’s dirty politics! Let us keep looking elsewhere! Ruto will be worse than Moi in every aspect of leadership! We deserve better!

If we could foretell tomorrow perhaps all of us would be in good shape. But then we are living today. Mr. Ruto is as good today as he could tomorrow. Actually he could be more better if you voted him for president. Honest, truthful, trusted and works to improve lives of people.

Uhuru has officially thanked his AGiKuyu & Rubwa voters and would be presidential aspirants KI PUNDA STYLE-KULUSA MATEKE.He told them to forget leading Kenya as their tribes have being presidents.Thug Uhuru told Kenyans that they have been ruled by over 11m AGikuyu and Rubwa presidents and 3m.Jaluos have been (PMs)PRIME MURDERERS.SAA INGINE NI VIEMA waNgina kutumiaga KAMASI KIDOGO KAMA AKILI IMEMUISIA.This guy has no respect to his tribesmen and other Kenyans who have been voting for him.It's better for someone to lock the door behind him/her without banging it.You might need it tomorrow.

What is Rubwa!? It sounds like the name of small dog!

But you were a project of President Moi. You would be no where without him.

Kenya's last Governor before independence Sir Patrick Renison wanted to hand power to Jaramogi as early as 1961 but Jaramogi refused n demanded Jomo released first. He warned Jomo was a leader unto Darkness n death but Politicians ignored Him, Jomo Himself had been in Britain for 15 years n learnt the art of grabbing large parcels of land to the extent that after independence displaced His people sending them to Lamu, Rift Valley & even wanted many sent to Tz so for the purpose of greed

If elections were fair and free from rigging, everyone who qualifies to run for president is allowed to do so. And whoever wins will be Kenya’s president not a tribal representative. What the president said is not hinged on law but his personal opinion. And even if it’s his personal opinion, he is lying to Kenyans. He is already a third kikuyu president. Why did he run then if he was such considerate?

No one wants another Rubwa to destroy the country! One Rubwa told us to follow the footsteps and he turned the country into a cow shed full of mud. He stole everything and he taught other Rubwa to steal! And now we got the most corrupt Rubwa in Ruto wanting to be president? It will not happen! Mogotio politics should be kept in Sugoi and Iten!

Wait till swearing in. Every leader deserves honor. It was God's will 4 Moi to be president to reduce big heads to size. He did perfectly. Having come from a tiny clan he elevated neglected tiny people to power. Kiambu mafia knew Nairobi was Kenya and cared less for anyone else outside CBD. We need more Rumbwa.

Well said Builder. Some of these bigots bubbling here were saved from malnutrition and jiggers by Moi.

Tribal bigot at its best. If it wasn’t for Moi to feed you milk plus, you were dying of kwashiorkor, marasmus and jiggers. And now you think you have a mouth?. I know you won’t understand. Ask your mother and she will shed some light for you.