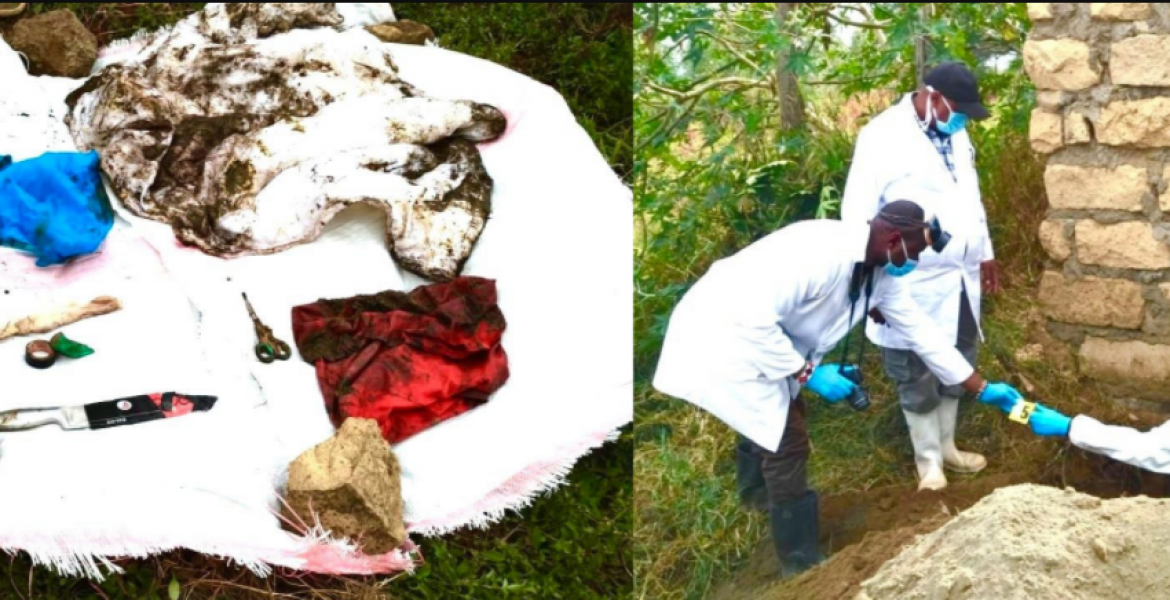 Murder suspect Lawrence Simon Warunge has confessed he killed four members of his family and their farmhand, according to reports.

The suspect who was arrested in Lower Kabete on Friday night said he chose to eliminate his father, mother, brother, and cousin because they were badmouthing him.

He also told officers that he initially wanted to kill everyone in the family including his two sisters but the plan failed after they returned to school on December 5th.

A police report shows that he first killed 40-year-old James Kinyanjui, the family’s farmhand who lived a few meters from the main house.

He then attacked and killed his mother Anne Wanjiku, a nurse employed by the Kiambu County government, followed by his 13-year-old brother Christian Njenga who responded to his mother’s distress call.

Lawrence then descended upon his father Nicholas Njoroge Warunge who had jumped from the balcony attempting to flee.

Njoroge, a US-based nurse who arrived in the country on December 4th to spend the Christmas holiday with his family, was stabbed 34 times and his throat slit.

The last to be killed was his cousin, 13-year-old Maxwell Njenga who was hiding under the bed. The suspect told detectives that he stabbed the minor with a knife despite him kneeling and pleading for mercy.

Lawrence further said that before embarking on his killing mission, he researched on the internet the best way to execute the crime.

To ensure none of his victims survived, he would hit them on the head with a metal bar, stab them multiple times on the chest before slitting their throat.

After killing the five, he packed his bloodied clothes, phones of the victims, and the murder weapons in a bag and traveled to Njikase village in Mai-Mahiu, Nakuru County where he had rented a house with his girlfriend.

The Bachelor of Business in IT student disposed of the knife, the bloody clothes, and one house key in a public toilet and burned other items including a mobile phone in a nearby valley.

His girlfriend, Sarah Muthoni is also in police custody to aid officers in investigations.

It is hard to believe he killed 5 people alone with a knife. One person cannot kill 5 people with a knife without the victims fight back especially the father. He is lying. How did he manage to go to Naivasha at night and there is curfew?

Ok. We need to get serious with mental illness among Kenya's youth. Badmouthing him? Clearly this boy had some undiagnosed, metal issues.

Lakini, none of these people thought of tackling him? The father tried to run away? A common drill training is such this; when there is nothing to lose, there is no way out, tackle the threat for you are dying anyway, you may as well die in protest! My little cousin fought off 2 gunmen in Lang'ata, to try and save the boyfriend who jumped off the balcony and died. And this man just ran away?

Men, I will not mention regions, try and protect your women and kids in danger?

Very easy to point a finger while you do not have facts of what transpired! And then you want to start incriminating certain regions simply because you are a dredged luo old woman. Be informed that luo men are the worst cowards and can only shout abstract nonsense when in danger! Stop your small head foolishness @seneca!!

Wow! What a dredged monster kid!

The judge to handle the case will have to order for a 15 policemen,24 hour AK47 armed guard when giving bond.Otherwise he will be doing the villagers a favour of punishing him themselves.Lawrence should be cut into pieces without mercy or just burn him while alive until he dies.

Ezekiel Mutua the "Morol" policeman of Kenya has failure us on this. This TVs shows for kids that portrays social injustice should now be taken to parliament to be banned the same way gay relationship were passed in law.

Just hang the idiot or let him get stubbed so he can feel the pain he made others do n let him to die.Hang the idiot his case should not last 3 days in courts.Arresting him n keeping him in jail will encourage others to do the same.Also he will b wasting our taxes in jail.Again hang the idiot n don’t give us any shit of mental health nonsense

My Heart goes out to the family and friends of the victims.

Oh my goodness! God have mercy. What a terrible act. I can't imagine how desperate situation this family was in, with nobody to help them. Very painful.

Oh my goodness! God have mercy. What a terrible act. I can't imagine how desperate situation this family was in, with nobody to help them. Very painful.