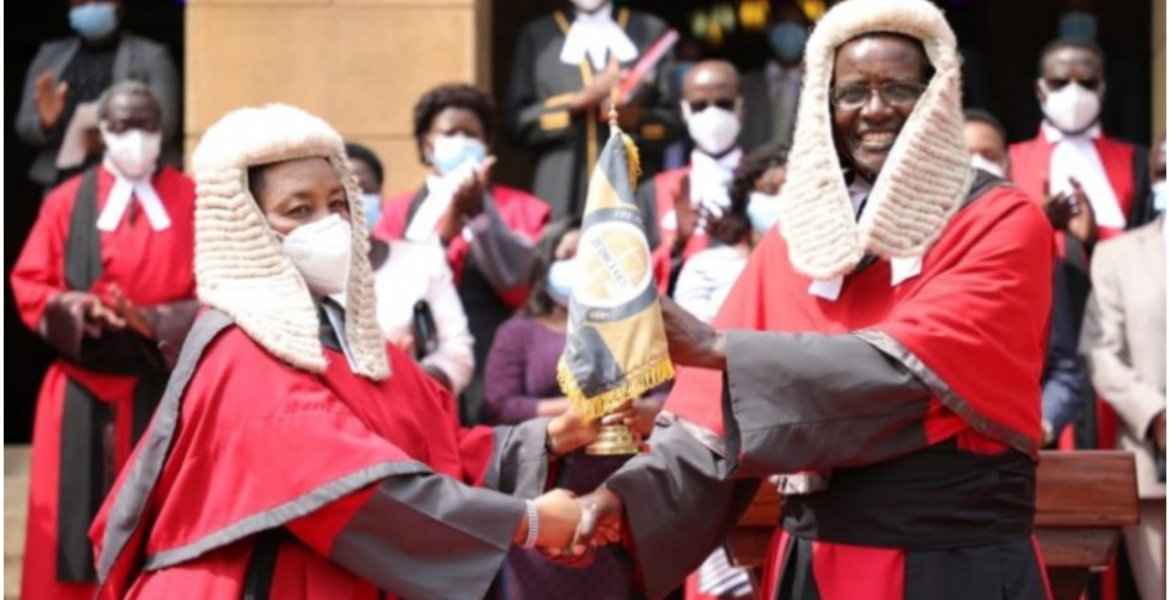 Chief Justice David Maraga’s five-year reign at the helm of the Judiciary has officially come to an end.

On Monday, Maraga handed over instruments of power to Deputy Chief Justice Philomena Mwilu, who will serve until a new office bearer is appointed.

Maraga is proceeding on retirement having attained 70 years, the mandatory retirement age for judges in Kenya.

During a special ceremony held at the Supreme Court buildings on Monday, Maraga handed over the institutional flag to Mwilu, signifying the transfer of authority to the acting Chief Justice.

“As I have already said the Judiciary and our judges are the custodian of the Constitution and we cannot tire to continue reminding ourselves of that responsibility. It is now my pleasure to hand over the Constitution to my deputy,” said Maraga.

Maraga served as the country’s 14th Chief Justice and the second under the 2010 Constitution after assuming office in 2016 following the early retirement of his predecessor Willy Mutunga.

"We must continue to invest in our judiciary, bearing in mind political stability in this country can only be guaranteed if rule of law reigns. Without rule of law in this country, we will all be losers. I assure the entire nation that I leave behind a strong Judiciary with dedicated and professional judges. I urge citizens to support judges and magistrates," the retired CJ added.

Mwilu will serve as the acting Chief Justice for a period not exceeding six months pending the appointment of a new Chief Justice in line with section 5 of the Judicial Service Act.

Maraga whose term was marked by judiciary budgetary cuts as well as public fights between the judiciary with the executive will be remembered for the historic nullification of the results of the 2017 presidential election over illegalities and irregularities.

Thanks Mr maranga, you have done a good job for Kenyans during your period of leadership,may God bless you.

Looking back, Maraga did the best he could with the little he had. Did he ever get the Mercedes he wanted? I hope he got one. On the other hand,Mwilu should actually be in jail not the acting CJ.

@Imara, umesema ukweli kabisa. Ruto should be a jail bird making Ugali for everyone. Mwilu on the other hand should have been fired by now because she is incompetent and corrupt.
Kenyan judiciary and legislative bodies are yet to be independent from executive. Uhuru's fingers have been everywhere interfering with Maraga's work throughout his tenure making it impossible for him to accomplish much. Remember "we shall revisit" statement? That said, judiciary has gone through some changes and we are beginning to see judges making unprecedented rulings. However, prosecutions meant to keep politicians in line and pressure to set them free when they fall in line( by executive) is a major frustration to those working in courts and of course to the country. We are yet to see prosecution and a lengthy prison term thrown to any politician.

@ mugukuyu,in a corrupt country like Kenya,there is no way the Judiciary body can be independent.The excecutive will not allow.You straighten the executive body,and the Judiciary will follow suite.Things are even worse when it comes to the legislative branch,which is pretty much ruled by the executive.Its a big mess.Pretty much no separations of powers.There is only separation of jobs .In Kenya the executive body pretty much controls the other two branches.
Time for Raila and his cohort to revisit USA for another lesson in civics.The opposition and the media as supposed not to be in bed with the executive body,but to act keep tabs on checks and balances.Yes,power corrupts.Some have called Uhuru a dictator,meaning he has consolidated powers unto himself.But if truth be told, we the people have the power.THE VOTE,its a very powerful weapon if not bought,but generated from our conscience,and integrity.

The most people that died of ethnic cleansing were the Luo killed by the government during the day. There are records of the killings. Fully documented.
Ruto did not grab Muteshis 100 acre land. He bought from unscrupulous con people. The court has established the same. The most most grabbed land you need to talk about is the hundreds of thousands of acres of land grabbed by the Kenyatta family and the foreigners. I don’t get when people intentionally go blind on this!

Your bloody name betrays you to the core! No wonder you are a very good disciple of Ruto; a known murderer!

Thank you this idiot have exited.He is one of the foolest church goer who yap himself as a elder at Adventist.I personally have no respect of an idiot who wanted Kenya to burn when he ruled uhuru lost elections which he had won but because he was among the poverty stricken supporter he didn’t care if Kenyan burns but to make sure his own man becomes the president but our kirinyaga Gods worked full time to make sure kenya didn’t burn.Kenya lost more than 20billion to repeat unnecessary elections which his idiot man refused to join n he didn’t punish the kisumu idiot?Anyway mr maraga I hope u Go ask that Adventist leader which U guy worship for forgiveness.

Maraga was corrupt,but not to the extends of UHURU and GOONS.
UHURU did frustrate him most of the time.
Enjoy your retirement.

All the elite thugs employed by hungry,billionaire Kenyans belong to the gallows.How will Mwiku judge other thugs yet she has unconcluded theft case?But as it is now,ONLY A BLOODY REVOLUTION WILL SAVE KENYA.Most Kenyans cannot even think for themselves.A good example is the 5m.hungry,empty heads who signed for BBI.Only a mad person would vote to add 100 prostitutes as MPs @shs 1.5m.per month and another number of 100 elite idlers for the same amount.RISASI TU.

Can do attitude was never a Maraga’s CJ leadership philosophy! The guy had self confidence issues which hindered him from accomplish anything worth noting. He loved negative publicity like a little kid crying for a piece candy! He was always a victim of circumstances which tendered the justice department useless!