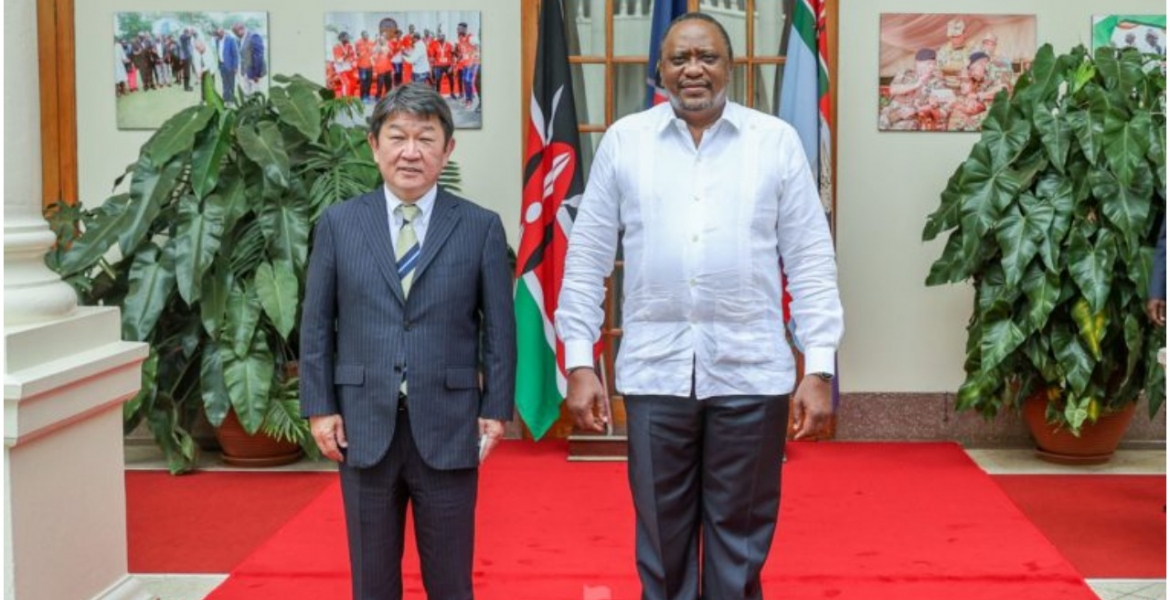 President Kenyatta hosted Toshimitsu at State House, Nairobi where the two discussed issues of mutual interest between Kenya and Japan.

During the meeting, Toshimitsu reiterated his country’s commitment to supporting Kenya’s development programs.

“This visit will see our two countries strengthen our relations. Japan sees Kenya as a key partner and a gateway to Africa thus prioritizing investment in the country,” Toshimitsu said.

He mentioned the ongoing expansion of Mombasa Port and the development of the Dongo Kundu Special Economic Zone (SEZ) as some of the key projects Japan is committed to seeing through.

At the same time, Toshimitsu updated President Kenyatta on the planned Japan-Kenya Business Dialogue scheduled for later this year and extended Prime Minister Yoshide Suga’s invitation to him.

On his part, Kenyatta thanked Japan for its continued support for Kenya’s development programs saying Kenya is keen on cementing its ties with the Asian nation.

“We truly appreciate your support that has been visible in several sectors of our economy, and we look forward to a more intentional partnership even as the world continues to face the challenges brought about by the Covid-19 pandemic,” said Uhuru.

During the two-day visit, Toshimitsu held several bilateral meetings with Kenyan officials where ways of expanding economic collaboration between Kenya and Japan in the post-Covid era and beyond were explored.

Uhuru looks constipated. It’s like he’s trying to take a deep breath and suck in his belly but it’s just not working. Seems like he gave up on suits. That’s my guy.