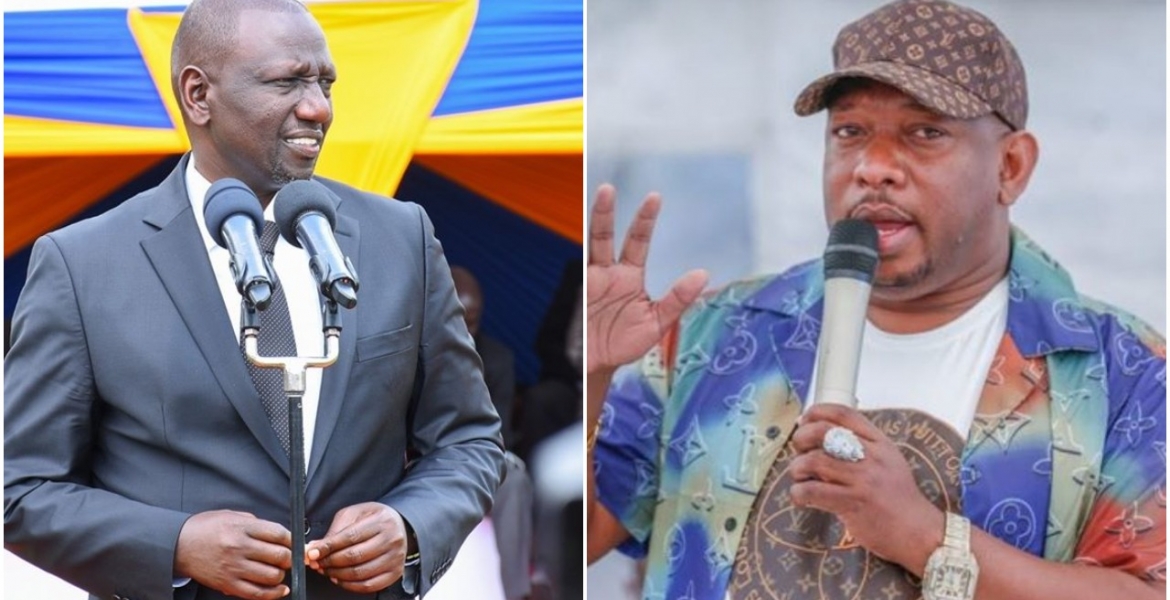 Former Nairobi Governor Mike Sonko has claimed that there is a plot to assassinate Deputy President William Ruto.

Speaking in Kajiado, Sonko further alleged that the assassinators, whom he did not name, were also targeting him.

“I am not afraid. I have been told that they plan to kill me as well as the Deputy President. The only person who has the authority to take away human life is God,” Sonko said on Saturday.

He urged Ruto to avoid eating or drinking anything offered to him at State House as he is likely to be poisoned.

“I just want to warn the DP not to partake anything that is offered to him at State House and that is because I love him and would like him to be the fifth President of Kenya,” added Sonko.

He further called for the impeachment of President Kenyatta, claiming that he has violated the Constitution.

Sonko, who was impeached last month on four charges among them gross violation of the constitution, abuse of office, misconduct, and crimes against national law, insisted that Uhuru was behind his ouster.

Pure nonsense! Now we have conspiracy theorists mushrooming all over the country! No wonder folks like Ruto and Sonko are not fit to lead the country! It is that simple and people should shun their empty rhetorics!

Siasa za watoto! It is the old bhang in Sonko’s head catching up with his mouth! I still don’t think any one will cry if they are both dead!

The sun will still rise from the east and perfectly set in the west! These two should be imprisoned! They are some worthless trash!

SONKO wacha UJINGA.
If you know them then call DCI's KINOTI.
These propaganda might be valid coz you were part and puzzle of SAITOTI's death.
You know them...or may be they will use you to kill RUTO.

Hawa ni wachenzi! But I fully blame the simple minded and the naive Kenyans who get deceived by idiots like Sonko and Ruto.

These two conmen are coming up with some outrageously nonsensical claims to keep themselves in the press! Bad shit sells to the weak minded! And there no shortage of weak minded in Kenya as a whole!

You are here looking at the two greatest thieves in Kenya hoodwinking some “wheelbarrow” type Kenyans who are just looking for kitu kidogo Kama wachawi! It is such a shame that these two corrupt fools are taking ordinary folks in the wrong direction.

I sure wish what Sonko is praying for could happen for real! It could solve a lot of stupidity peddled by both Ruto and Sonko!

They have both killed many Kenyans along the way and it would only be fair if the same fate visited them! Kenei, Yebei, Juma, Muteshi, etc died some painful deaths under Ruto’s instructions!

Sooner you need to be on the dock giving your evidence on murders you just mentioned. Just be ready to prepare your defense otherwise you’re in for defamation and other charges.

How come only Ruto and Sonko are afraid of getting killed? The ghosts of those they have killed is now baying for their tainted blood!

You killed others but now you are afraid to die? The wrongs you have done on this earth are kindly paid back here on earth! Shauri yako Ruto and Sonko!

They are afraid and they are now hallucinating on the crimes of passion they have committed in the past to the innocent people! Be a man and take it without complaining!

It is quite strange how every corrupt politician Ian ends up in DP Ruto’s homestead! Surely Ruto’s have a case of corruption to answer to the people of Kenya.

Tell us who is not a thief or corrupt in Kenya.

Every big thief ends up in the company of Ruto! It is amazing how all this happens without shame!

This useless Kamba dude has no manners whatsoever! He is shameless creature of no material value! How did nairobians got conned to voting for a criminal for a governor? Trashy, trashy, trashy; a foolish trash!!!

Who cares if anything getting rid of both of these thugs means less competition for the voter in 2022 but sadly by the time we get to the polls a new crop of thugs will be waiting with more lies and false promises.

@ guesty - wow - I give you a free wheelbarrow for that nice comment! Making you even poorer - a two wheeled mkokoteni will be a better transport for you! Ruto wants to make Kenya go back to Stone Age time! Mogotio express!

His excellency president Uhuru said, “I got Sonko fired because he was up and a rounding talking bure and doing norhing for nairobians”! Then Uhuru praised Badi! Wow, Sonko, that is like your school teacher saying you are stupidly dumb! And how do you like me now??

Ruto is using every Tom, Dick and Harry in support of his theft of country’s coffers and his well known corruption network. Sonko is just a dummy and Ruto is using him to confuse the masses!

Ruto’s hustler movement is equivalent to the movement Hitler created in nazi Germany where millions ended up dead! Ruto has a lot of hot blood in his hands! Don’t be deceived in churches that Ruto is a good clean man!

Kenyans should take this fact seriously as Ruto uses corrupt methods selling them fake facts so they can vote for him!

Kenya will go up in 🔥 flames with Ruto as the president! We can’t let this happen!

In order for you not to look fake, please give me a few fake facts that is associated with Ruto.

It is not my responsibility to educate a dummy! Stop playing a shithead! You know the facts but you are in denial because you want your thiefing man rain or shine!