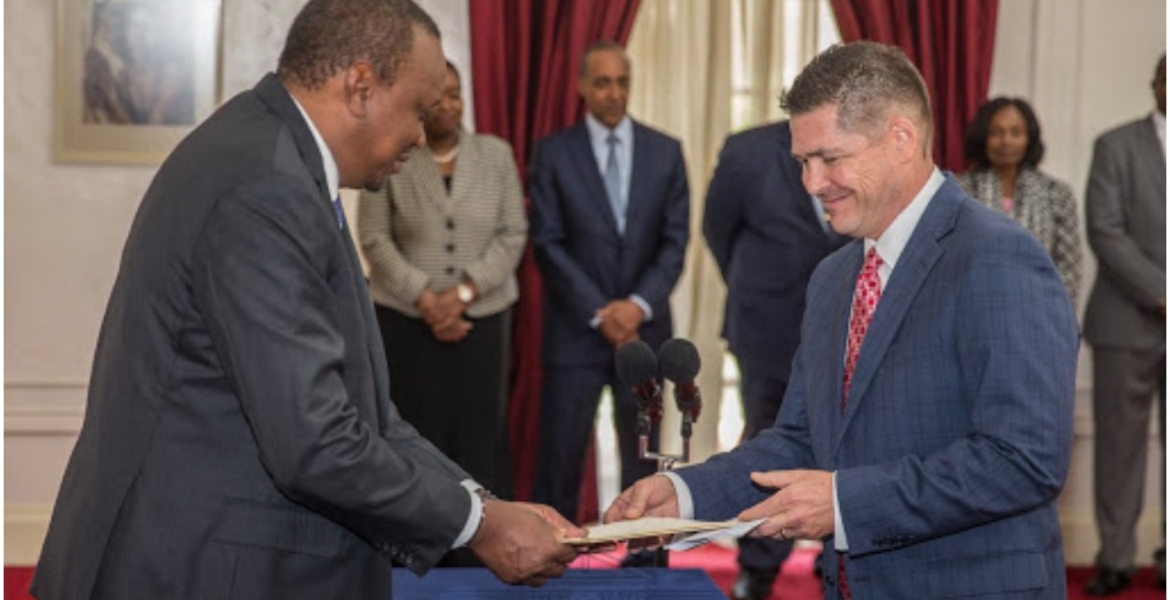 US Ambassador to Kenya Kyle McCarter has announced his resignation from the position.

McCarter said he will officially leave office on Wednesday, January 20th, the same day US President-elect Joe Biden will take over from President Donald Trump.

“I am sad to announce that this privilege is coming to an end on January 20 when I will resign my post. Nevertheless, Kenya will continue to play a large role in my life,” McCarter said in an opinion piece published in local dailies on Sunday.

McCarter, who was nominated to the position by President Trump in 2018, added that it was an honor to serve as an ambassador to a country that he termed dear to him.

“Kenya has always been a part of my life. First through my father’s good works to bring health and education to children in need in Tharaka Nithi and then as Victoria and I continued his vision and Tharaka Nithi became a second home to us,” he said.

He added: “To return decades later as US Ambassador was the greatest honor of my life and an extraordinary opportunity to serve my country for the benefit of the American and Kenyan people.”

The former Illinois Senator pointed out that during his tenure, Kenya and the US strengthened trade ties, adding that Kenya was among the biggest beneficiaries of US aid.

In a farewell letter on Friday, McCarter noted: “As I reflect on my time as Ambassador, I continue to believe that Kenya should no longer be just a beneficiary of foreign aid, but a benefactor to the rest of East Africa.”

In with new, out with the old. New president, new ambassador appointment. He didn’t resign, he’s term just ended.

I said it right on here before...
That mutha facka is a White supremacist

Most likely! It is what is treading in the US with government officials betraying others!

This was a directive from the whitehouse,that all politically apointed ambassadors to resign by January 20th,when the new administration is ushered in.As goes the BOSS so goes his envoys...This is expected.Some of you may remember when Trump took the reins,a number of embassies remained without top staff for quite some months.
This does not in anyway imply that all ambassadors are "recalled." In away, that's not all that different from what Uhuru does,or did.

Hopefully this is the beginning of the end also for UHURU and GOONS.
But, problem is the west will always protect the dictators as long as their interests are well protected, until when the masses get tired and remove them then the west being the WHORES they are will switch gears and join the pack and support the next one.
This is capitalism basics 101.

I won't miss him. Good riddance!