Kalonzo Hits Back at Ruto over Land Grabbing Claims, Compares Him to US President Trump 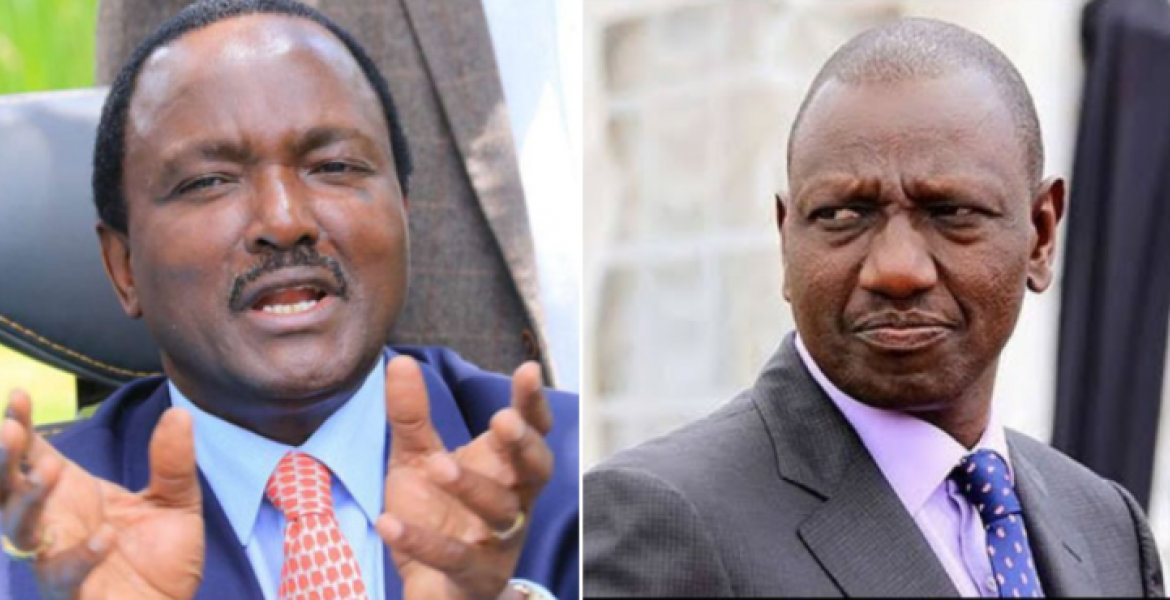 While dismissing the allegations as false, Kalonzo accused Ruto of tainting his name in a bid to gain political mileage.

He invited State investigating agencies including Ethics and Anti-Corruption Commission (EACC) to conduct a probe into the allegations, insisting that he has nothing to hide.

“Addressing a rally in Bomet on Friday, DP Ruto made a frivolous and unsubstantiated claim to the effect that I grabbed government land in Yatta… The wild claims hold no water. The allegations are a cheap and desperate attempt at character assassination,” Kalonzo stated.

He added: “I have endeavored to uphold the highest moral and ethical standards in all my public affairs. I have nothing to hide. I challenge authorities to open investigations into this matter.”

Kalonzo, who spoke at a Nairobi hotel on Monday, challenged Ruto to equally offer himself for investigations concerning the many scandals he has been mentioned in.

Kalonzo also wants Ruto to come out clean on how he acquired large tracts of land in Taita Taveta County, explain what he knows about the fake arms scandal, where one of his bodyguards was murdered, and his role in the Arror and Kimwarer dams scandal.

Kalonzo further accused Ruto of causing divisions in the country and compared him to outgoing US President Donald Trump.

“DP Ruto has been fomenting bitter division and a class war instead of preaching unity and cohesiveness. As a disrupter of law and order, he is easily comparable to outgoing US President Donald Trump. People like DP Ruto must not be given the chance to wreak havoc through manipulation. They must be stopped on their tracks,” Kalonzo added.

Ka-looser nowadays is just on it, speaking the truth. The arms deal by Ruto should be fully investigated as this was a big time national security concern. So many stones unturned on this Ruto thug. Much as I dislike ICC and believe Africans should solve their issues, this is one man who deserves a date with Fatou Bensouda.

No doubt ICC is nicely reorganizing the case against DP Ruto! It is just a matter of time Ruto becomes a resident of The Hague!

I like the positivity about your adjective “ nicely “. But at the same time facts tell us that the ICC case crumbled. And badly. Evidence was established that witnesses were couched. The case was not fully investigated. Those are sentimental evidence from the prosecutor. The ICC case except being for hyperbolic is as dead as dodo.

You are dealing with a mad man @ Kalonzo! Ruto is like a little child craving for attention! We all know he is a thief by profession but he wants to make you and others look like him!

Ask Ruto to return the airport land and the late Muteshi’s 100 acres!

Even dogs can testify that Ruto is a big thief of everything he puts his dirty hand on!

Kilonzo should tell Ruto to stop lying in the house of the Lord (churches) by preaching alternative facts! Ruto and the Devil drink from the same dirty cup!

Damn , how does a thief call another thief a thief?
Tuachisheni unjinga.
All these crooks needs to be removed from office.
REVOLUTION basics 101.

Ruto is the biggest thief to ever live! The demons in his head made him call Steve a thief! He was certainly thinking about his stealing habits!

The fake firearms tender in Deputy president office was organized by the kieleweke adherents got the sole purpose of soiling or bringing into charge Mr Ruto. Office of the Dp does not do requisition for any of the government tenders. The plot miserably flopped. And so they went ahead to kill one of the trusted Dp’s security personnel in the hope to archive or drag blame to Dp. That also never stuck.
Ruto has been all over the country preaching love and peace. And most of all making aware of their government. He has been preaching the need to help the wheelbarrow class to some economic productivity. Kalonzo and some of his like minded are calling this class war. Kenya’s economy needs to rise from the bottom up and not up bottom. Ruto is trying to uplift and enlighten the rural folks. This happens to be the bedrock of the economy. Dome successfull folks in and of government does like competition or anyone rising up.
Divisions are caused when you tell people to vote certain tribe. Or you lie to people that they should practice rotational presidency. Remember the Kenya constitution does not have a constitutional presidency. Not even BBI has it.

@asista - thank you for accepting that your mother was coordinating with Ruto to stock pile weapons of mass destruction to be used in Eldoret in 2022! Your defense of the worst murderer in the continent of Africa is quite fatally hilarious indeed. The kalenjin community commits crimes in draws led by their lunatic member of the community! Bunch of thieves who can never be entrusted with anything!

Nothing other than tribal bigot. See sense and be good buddy.

Who is mr Ruto? Now the greatest land grabbing thief has a new title of a mr after @asista realized the dr title can hold because it is bought and stolen!? Mr Ruto my ass!!

Mr Kalonzo - ask Ruto who killed our daughter Mwikali for revealing Ruto was beating his wife rachel, and ask him where in his stollen pieces of land he buried her body?

It is time for Ruto to come clean with his criminal life. You are right Kalonzo, we want our land back which was forcefully taken by Ruto in 2007.

Ask those foreigners and the first elite like jomo for the vastly grabbed land.

And now your Ruto is the one stealing peasants land, eg Muteshi’s land and many more! You are just a hyena that eats Ruto’s vomit because you don’t know any better! And yes, you do know but you wish to continue the corruption spree (stealing from Kenya’s coffers and Kenyans) should Ruto be in charge! You ought to be ashamed of your ass selfish self!

The time to eat for free is over. Glad Kalonzo is pushing this most corrupt and guilty DP to return the stolen land.

Ruto does not qualify to run for the presidency of Kenya! He will steal everything Kenya owns and then sell the country to the Chinese for more money in his pocket.

Kenyans want to keep this issue alive until DP Ruto gives up all the land he has stolen! We can’t have a thief inside the government! He should be barred from holding any public office due to his corrupt nature!

The biggest tracks of land that was grabbed was done by colonialists and the elites at the time and who happened to be amongst Jomo Kenyatta. Uhuru the son is the direct beneficiary of this lands. While the other large farms are still owned by the colonialist. I see you are perturbed by only 100 acres ( which never happened) while you are overlooking tens of thousands of lands tracts in the hands of foreigners and a few elites.

Keep in your mind Kikuyus have over 6 million votes. We will determine if Ruto gets the presidency or not! Based on you tribalist expressions here, I see no reason why we should vote for your tribesman, Ruto! Your tribe only got 2 million votes. Now genius, you do the dirty math! The numbers do not add up for your corrupt me! We will not vote for Ruto!

It’s your vote. Your one vote. 2/3 are going for Ruto from your region. All is in place brother.

The president finally called Ruto a thief and a waster of our resources. Kenyans know Uhuru us telling the truth!