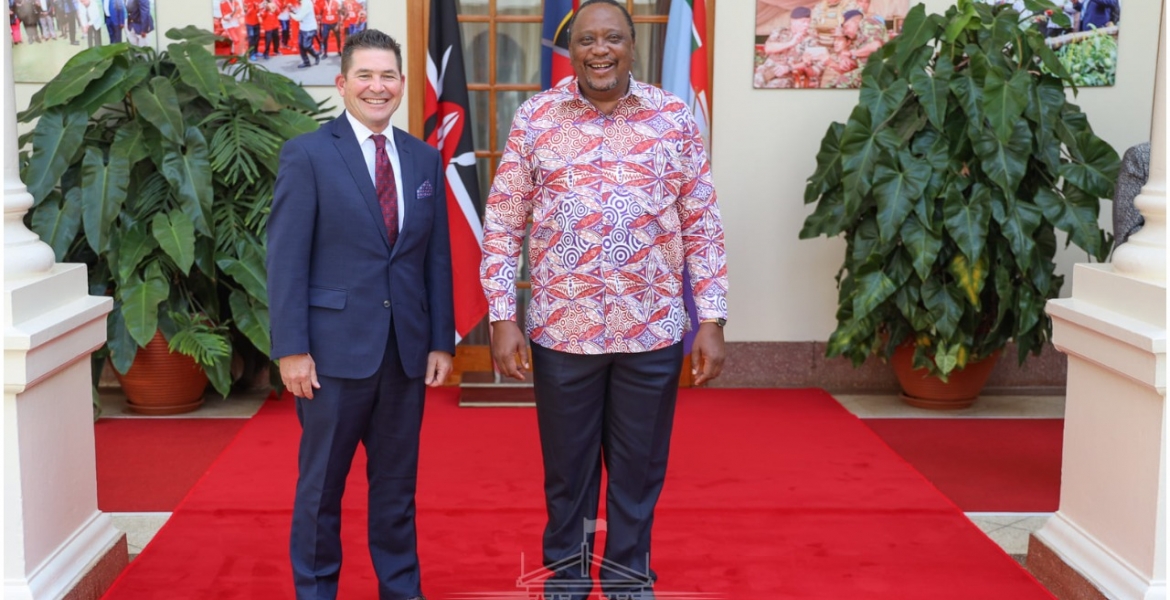 McCarter, who announced his resignation from the position last week, paid Kenyatta a courtesy visit at State House, Nairobi on Tuesday afternoon.

Speaking during the meeting, Uhuru expressed Kenya’s determination to conclude the ongoing negotiations for a free trade agreement (FTA) with the US.

He pointed out that the trade pact will build on what has been achieved under the African Growth and Opportunity Act (AGOA) by providing better trade opportunities for Kenya.

“We appreciate what has been achieved through AGOA, but it is time we moved to much closer trade arrangements that are mutually beneficial. We will not lose focus on concluding the FTA,” said Kenyatta.

The trade discussions between the two nations commenced last July with a view of coming up with a comprehensive agreement that will act as a model for similar pacts between the US and other African countries.

On his part, Amb. McCarter thanked President Uhuru and Kenyans for making his two-year stay in the country a success.

“I am a fortunate man to have served Kenya as US ambassador. I will be visiting Kenya from time to time and I hope I will be able to bring more investors,” he said.

McCarter will officially leave office on Wednesday and return to the US.

I hope Biden appoints a minority for this role.

What success? You did not achieve anything. You should have been like Smith Hempstone a lion and not a pussy (cat).

Photo Op wasn't necessary. You need to pack and go, and don't forget You're moving into a burning house. By the way, you guys always run your mouth telling us what to do, giving us instructions whenever Raila unleashes his goons -supporters into the streets of Nairobi to wreck havoc after every election that he looses; yet our ambassador at Washington DC hasn't said diddly Squat. Why is that? Why can't we call you out too?

Mwororo, that's because the Kenyan ambassador in DC is a wimp.

UHURU won this one...

Kyle McCarter wasn't there for good in HUMANITY...but was there for vacation.
There is nothing gained by Kenyans.
UHURU kept looting and Kyle McCarter looked the the other way.
American won because of the new ARMY bases to protect their interests...but UHURU had to agree...
So...Kenyans lost.
UHURU won.