Raila is to Blame for Jubilee’s Failures, Ruto Says 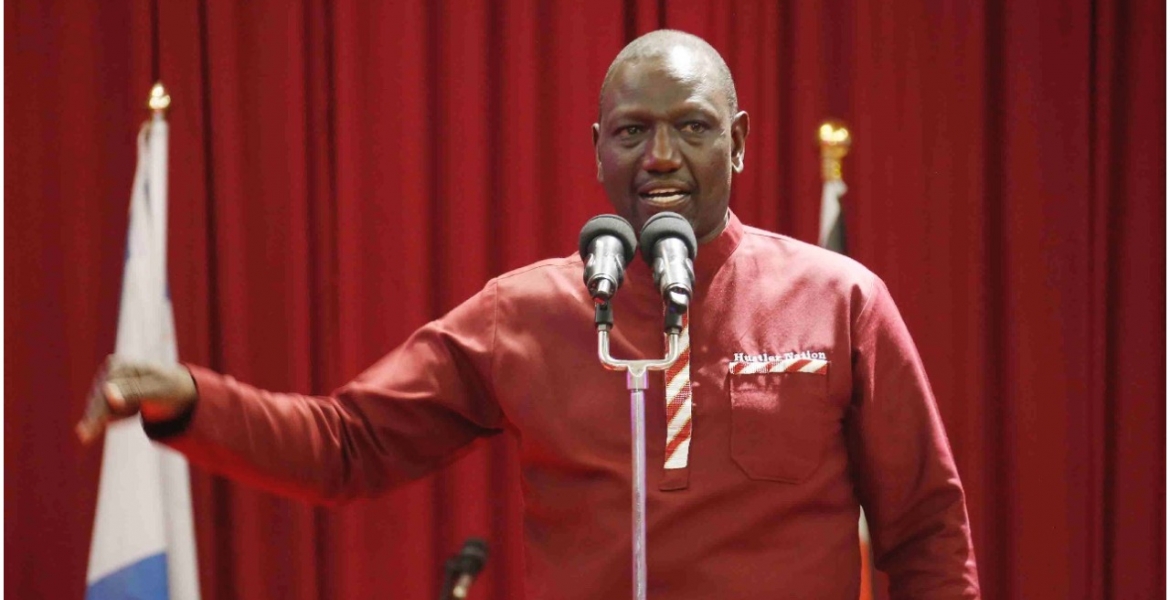 Ruto claimed that Odinga and ODM have been involved in the running of the government for the past three years through the handshake, and cannot distance themselves from its failures.

Speaking at his Karen residence on Friday, Ruto said Odinga was the reason why the government shifted its focus from the Big Four Agenda to the Building Bridges Initiative (BBI).

“You came and changed the government’s priorities from the Big Four Agenda to alternative ones like the Building Bridges Initiative. Now, after you have failed miserably, you want to run away,” said Ruto.

“You (Raila) must bear the consequences for the derailment of Jubilee’s development agenda. You cannot point fingers at others.”

Ruto was responding to Raila, who on Thursday criticized the deputy president for disassociating himself from Jubilee’s unfulfilled pledges to Kenyans.

"They said we are analog and that they are digital, now they are distributing wheelbarrows and handcarts. Do not give the youths handcarts and wheelbarrows.  These youths need sustainable solutions. What is the use of wheelbarrows in Nairobi?" Raila said.

On Friday, Ruto also defended his 'hustler nation' narrative against claims that it is meant to divide Kenyans along class lines.

“The discussion we are having about hustler nation is not a discussion about the rich and the poor, it is about getting everybody to the table and ensure everybody counts," he said.

“How is it a discussion that is dividing people if we are saying let us also have a discussion about the ordinary people of Kenya?”

Ruto ought to be ashamed for blaming others for jubilee failures. Ruto did not want to accommodate Raila so the country could be peaceful! All Ruto cares is himself!

The jubilee administration accommodated every one once they won elections. As an individual when one looses elections one goes home. You don’t wait to be accommodated individually. This explains part of the failures that the official opposition, who is supposed to keep checks of current government is mute. Reason being that everyone is busy “eating “.

Kenya belongs to every body you piece of shit @assista! We will not elect Ruto, a tribalist, murderer and thief to be our president! The Kalejin tribe wants to steal all our resources through the high prince of corruption!

Hahaha I like that piece of shit part. Listen tribal bigot, you are badly off from being reformed. You elected Dp twice with over 8 million votes. Twice. Am sure if he Mr was a boot licker, he could be earning your support. I don’t understand how you are ducking your “ smart” head not to see the big thieves running the government. The other day the president confessed that he knows that 2 billion is stolen every day. It

Ahh! Common @Ali, you know better than that. You cannot call people names. That is disrespectful to all of us. There are adults in the room and we're trying to have a mature dialogue among friends. You owe @Asista an apology. Instead of insults, air your opinion, we will listen to you, agree or disagree without disparaging you.

Thieves do not become custodians of a nation’s resources! Keep your mogotio thief @assista! You will defend anything as long as it is a crook from your backyard if Iten!

Thieves do not become custodians of a nation’s resources! Keep your mogotio thief @assista! You will defend anything as long as it is a crooked thief from your backyaIten!

Thieves do not become custodians of a nation’s resources! Keep your mogotio thief @assista! You will defend anything as long as it is a crooked thief from your backyard if Iten!

This lunatic man is quite useless! Ruto does not possess the qualities of a president in making!

You are right. Ruto doesn’t possess the qualities of president in making. And reason being that he does not need the making. He is already made.

Ya, the man with a stolen PhD is made alright! He is a dark spot in your own community! Yeye madowadowa!!

He worked for it. If he did the Bachelor’s part which more taunting, what would make him not undertake PhD and especially after setting up his thesis at the masters.

Ruto is a demagogue preaching the alternative facts intended to divide Kenyans right in the middle for his own personal and political gains! Ruto does not love Kenya!

The only thing Ruto wants is to gain raw political power by fooling the simple minded (naive poor) to vote for him. He is appetizing them with dirty wheelbarrows. What they don’t know is that will end up with the up with short end of the stick if Ruto happen to get the power.

Ruto wants the presidency to protect himself and his colonies - Murkomen, sudi, wahome, Nyoro, etc. Ruto has no interest to develop Kenya. He will maintain the hustler (poor) status quo so they can continue to feed him with praises, eg like Trump!

The divisive messages spread by Ruto to those he perceives to be poor Kenyans will cause class war in Kenya. The poor are being hoodwinked by Ruto to physically fight that war for him through the ethnic divisions as he hopes to get to the top! Ruto is the king of tribalism!

Ruto’s hustler message has no place in Kenya and must be stopped by force if need be (if necessary) to save Kenya! Ruto’s main intent is to set the country on fire and burning, and then he will benefit from the fallout!

Kenya is bigger than Ruto, and we must understand Ruto’s hidden alternative facts and stop him before it is too late.

My friend find a way to always support such wild dreams. In fact you are the one spewing class war. You called the poor people naive. Poverty is not naivety.
And if there was anyone that fits naivety is you.
Ruto is traversing the whole country preaching piece and trying to sensitize the good citizens on their ability to uplift their economic and social status. You need to come out of that hole or stop what you are sniffing.

Of course the poor people are very naive because Ruto is lying to them with crappy wheelbarrows! But they are waking up one by one. They are just eating Ruto’s stolen money; and that’s it!

Just hold on to your prayer that they are naive. At least at end of the day you have your one vote.

Ruto is a wolf in sheep’s clothing. He is up to nothing good with his tribal messages cooked in churches to confuse the masses! Ruto know theology can be used a deceptive tool (opium) to drug up millions of people to support a selfish course of demonic action.

Ruto is taking advantage of the lowly in Kenya to get to power. Hitler of Germany used the same negative philistinism to confuse every body to include the wise Jews who watch in awe as Hitler gained political power. Hitler ended killing 6,000,000 jews; Ruto will do worse than Hitler.

The government must take charge and reduce Ruto into ashes before he reduces Kenyans into graveyards!

I believe the same person as Keller and mwatia. Listen you tribal bigot you need to be investigated and put away . You’re spewing hate speech. You are inciting people along tribal lines. Or causing fear among those tribes that live together. See, you are entitled to your opinion and freedom of speech as long as it is not intended to cause harm to others.

Kiambaa happened under Ruto’s wings. Muranga killing of the two happened the other day with Ruto watching! Truth is a very bitter pile! The world certainly understand the demon in Ruto’s head! Ruto would be happen to repeat Kiambaa menace all over again for his political advantage! Bear in mind that Ruto is the greatest tribalist in Kenya!

No it wasn’t under Ruto’s wings. It Kibaki and Raila wings. They were the cause of the infighting.
I don’t understand why some people see things inversely. Violent goons were bused into a peaceful procession by the Kieleweke adherents. It was a way to stop the hustler nation movement. It backfired badly. Since then they( Ruto distractors) have been trying other forms in an effort to stop him on his tracks. And they have been failing.

If Ruto is elected president in 2022, Kenya will witness a wind spread genocide under Ruto presidency! More than a million kikuyus will be killed by Ruto government in his first year in office!

Kiambaa church killings in Oscar Sudi’s backyard in 2097/8 will be pale in comparison to what Ruto will do after 2022!

The Kikuyus will stand the most to lose during Ruto’s presidency! Ruto is a Devil that no kikuyu should vote for in 2022. Ruto cannot win without the kikuyu vote.

There is a no mystery about what Ruto will do to the Kikuyus because it has already been done in 1990s for those who have forgotten that bitter history! Remember YK92 under DP Ruto as a young politician?

Ruto is a tribalist who hates the Kikuyus to the core! He hates Kikuyus because they stand in his tracks to be the richest guy in Kenya through corruption minted ways.

Only the Kikuyus will stop Ruto from what he is cooking with his hustler nation alternative facts! Wake up folks and do what is necessary to stop this evil. Kenyans deserve to live in peace!

@ mwatia This exactly fits into full tribal incitement. You need to be arrested and be put away. Anyone else reading it ought to forward it to the relevant authorities.

Nyumba ya Mumbi! You have no room in Ruto’s house come 2022! Ruto will finish you and keep walking like nothing ever happened! Kindly wise up in you voting choice come 2022!

You never give a hyena your own child to look after it! Ruto is a demon we all know far too well. Don’t be deceived with meta meta wheelbarrow nonsense!

Ruto is worse than colonial masters who brought our ancestors meta meta clothes full of butterfly flowers🛍! They ended up taking all our land! We had to shed blood 🩸 to get our land back.

Ruto is busy stealing our land today! In 2007, many died in the Rift Valley over land Ruto was stealing from them!

The blood is still wet and we don’t need to shed more blood in 2022 fight with Ruto! We make up folks; it is all real and it will happen again with Ruto as the president of Kenya!

Yes both Ruto and Uhuru are one and same in presidency. Ruto has to answer for the failures as well as Jubilee govt. Ruto should return all the stolen billions meant for development that his theft of the same denied the big 4 agenda implementation that the country sorely needed. Thats what he is trying to shy from and the reason his boss doesn't want him anywhere govt funds are involved. He is the main reason Kenya is behind. He is busy propagating Trump style antics and twisted propagandaist lies. He’ll fail miserably! Kenyans are smarter now than theyve ever been!