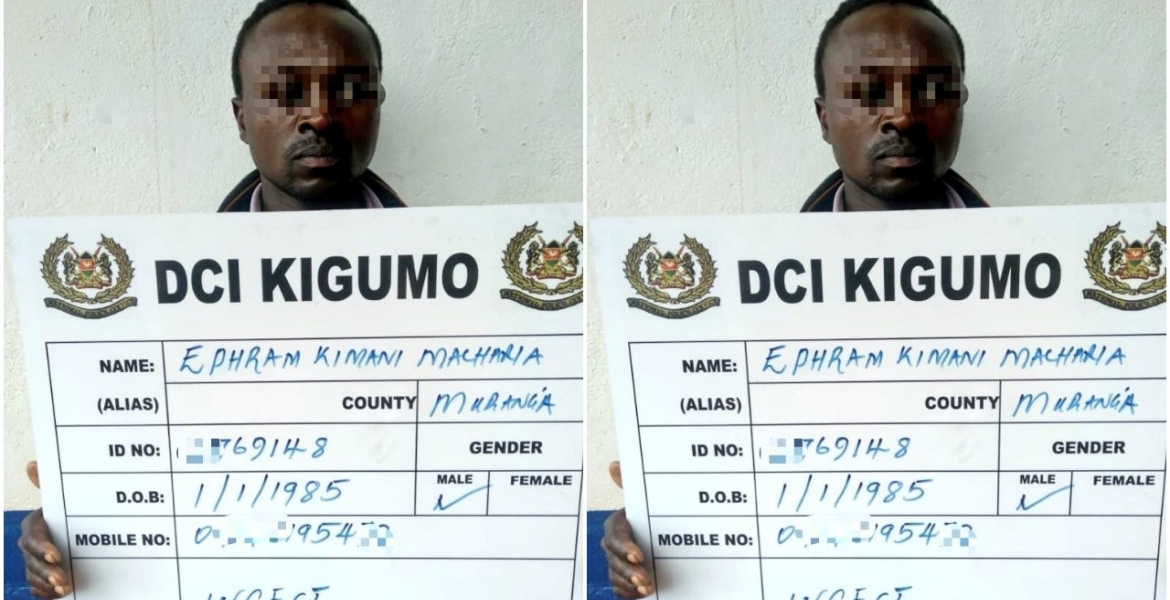 Police in Murang’a are holding a 35-year-old father accused of defiling and impregnating his daughter aged 13 years.

Ephraim Kimani Macharia, a resident of Kigumo, is alleged to have repeatedly defiled the minor during the period when schools were closed over the COVID-19 pandemic.

The man’s monstrous actions were discovered after teachers at Gatumbi Primary School grew suspicious over the girl’s condition following the reopening of schools.

This prompted the headteacher to take the Class Five pupil to the hospital, where a test confirmed she is six months pregnant.

Preliminary investigations revealed that Macharia was responsible for the pregnancy, according to the Directorate of Criminal Investigations (DCI).

“Inquiry into the odious situation revealed that the father was responsible, with the school going child narrating how he had slept with her severally since July 2020,” says the DCI.

The teenager has since been placed under the care of a children’s officer at a rescue center in Muthithi.

The suspect, who was arrested on Friday, was put in custody pending further investigations and arraignment.

The incident comes a week after a Kirinyaga Akorino pastor, who pleaded guilty to defiling and impregnating his two teenage daughters, was sentenced to 140 years in prison.

How low can men go? How do you get sexually attracted to your own daughter?

Which men?Count me out if you are one of the.

We should release pit bulls to eat balls..

You want to tell me the girls mother nor any adult of a sound mind were clueless of the 6 months pregnancy! More adults here should be charged! This world has become satanic!!

Some behaviors are Ancestry/Ancestral. GgggPa did it, GggPa did it, GgPa did it, Gpa did it, even Pa did it. Until the Younger or Youngest in Line got Caught: and got Punished ( Thanks these Days of Social media; Social communication).

Lot and His Daughters

30. Lot and his two daughters left Zoar and settled in the mountains, for he was afraid to stay in Zoar. He and his two daughters lived in a cave. 31. One day the older daughter said to the younger, “Our father is old, and there is no man around here to give us children—as is the custom all over the earth. 32. Let’s get our father to drink wine and then sleep with him and preserve our family line through our father.”

33. That night they got their father to drink wine, and the older daughter went in and slept with him. He was not aware of it when she lay down or when she got up.

34. The next day the older daughter said to the younger, “Last night I slept with my father. Let’s get him to drink wine again tonight, and you go in and sleep with him so we can preserve our family line through our father.” 35. So they got their father to drink wine that night also, and the younger daughter went in and slept with him. Again he was not aware of it when she lay down or when she got up.

So he defiles his own daughters and you fucking quote a story in the old testament? Where you there, and to begin with how old is his daughter? Stupid man you, maybe you do the same too!! Idiot!!

This is beyond belief.
He belongs to jail....
Wives please start being strong for your kids,stop being intimidated by some crazy husbands.

It appears a certain tribe has been hiding a terrible secret that has now come into light.Angalau in Western and Nyanza they take several wives including some younger than their own daughters or even grandkids to quench their thirst as second third or even fourth wives.I guess in some cases like this one polygamy would have helped on the other hand their greed for money will not allow them to divide their “wealth”to take on another or several more wives