Economist David Ndii Under Fire over Tweet on Circumcision 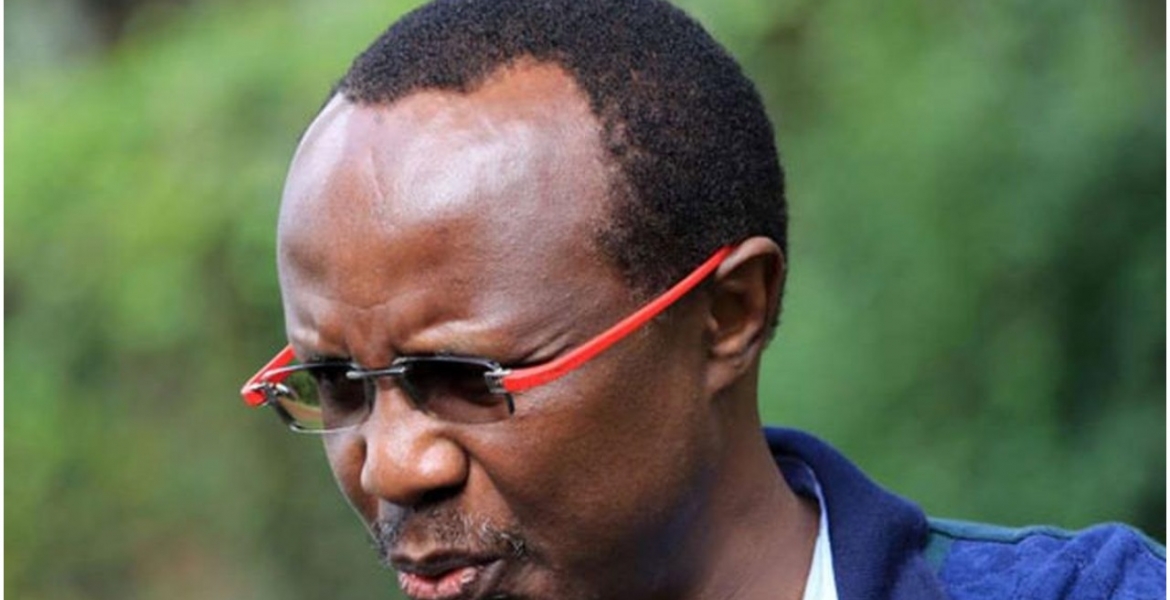 Renowned economist David Ndii is under fire from Kenyans on social media over his comment on circumcision.

“So Narok county predominantly Luo has approved the BBI referendum bill. Where is @DavidNdii,” Nudih tweeted.

Ndii, who has been on the front line against the BBI, responded by taking a jab at a community that does not practice circumcision.

“There are many communities that don’t practice circumcision in Kenya, but have you asked yourself why you are the only ones we call ihîî?” he posed.

@David Osiany tweeted: “This is the basest I have witnessed @DavidNdii. It is the lowest he has sunk. I am disappointed that political opinions would leave a globally reputed economist bereft of his dignity to this point. From Ndii, this statement is sad and awful.”

@Lord_Dbk said: “David Ndii has been reduced to Foreskin Politics.”

@KiigenKoech wrote: “The circumcision discussion lead by intellect in the name of David Ndii is not only uncalled for and unfortunate but also equals circumstantial thinking. The BBI isn't a Luo document.”

@OumaSarah1 said: Why insult a whole community to prove a point... This is proof that tribalism is deeply rooted amongst a lot of people in Kenya. So sad this came from a person like Ndii.”

@Osama_otero stated: “If David Ndii can tweet that, sasa imagine mtu wa boda boda mtaani? We have a very long way to go as a country.”

Foreign Academic Education seems not to teach the appreciation of diversity that is based on "cultural, religious, and linguistic backgrounds."

Ndugu Ndi has achieved the highest formal education one can achieve in a European-American based formal education. Yet, he is culturally illiterate. How come? So far, he has not learned that Kenya is an artificial nation that was created by the British and is composed of 44 or more distinct micro-nations ( a word coined by the late Dr. Wangari Mathaai who substituted it with the colonial preferred word "tribe").

Each micro-nation is unique and has its own cultural special and unique traditional values and practices. Ndugu Ndi forgets that except for the Muslim and Jewish based nations, and a minority of a few African micro-nations, circumcision is practiced by very few people around the world.

The micro-nation that I come from previously circumcised both boys and girls. After the religious indoctrination from the European and American based religious institutions and cultural intolerant and arrogant people, they stopped the female circumcisions but not the male based practices on this sensitive issue.

To be educated is to learn to be sensitive and to have the capacity to respect and acknowledge other people's cultures, languages, religions, and even cuisines. I therefore conclude that Ndugu Ndi is culturally illiterate and insensitive to the many diversities in our country that make us special and unique to the rest of world community.

Ndii is so frustrated that Uhuru and Raila are not paying attention to him hence the insults. With people like Ndii and Ruto being the biggest opponents of BBI,one can be rest assured this(BBI) will pass easily.

Luo’s are immature though.
Am not defending anyone but how do you describe a immature 50 year old man?

@Guesty, ask your man to mature up and stop generalizing.
True measure of a man is his character when faced with hardship not the presence or absence of the foreskin.

@guesty - Is that nonsense the best your little brains can offer!?

I dont know what "ihii" mean,but from comments here, I can tell, that it is a derogatory word intended to hurt,or humiliate the Luo community.The question now is WHY. Surely,I would hope that the whole community that has existed before he was born has not offended him.I can see one Luo,or two offending him. In that case, he should deal with them on a personal level.This is not a Kikuyu Vs Luo,or circumcised vs uncircumcised. I fail to see how BBI is connected to the two. Again like I said before, people like Ndii prove to the "uneducated" that he is no better than them in reasoning.And if they studied his field,they could do better than him in the same field he claims to be an expert.
The many years of smoking marijuana are bearing fruits.That must be it.And how rotten the fruits are...

Have you forgotten that he admitted that he smokes ‘ bangi’!

@Imara Daima,you've spoken well. Like the United States of America, Kenya is a patch work of multi-ethnic groupings forming a political union of sorts hopping to achieve more and better together. No one ethnic group is better than the other and no one cultural- traditional practices is better than the other. Unity in diversity is our only option if we're going to remain and succeed as a country.

This is nothing else than tribalism and disrespect of others culture. We can guess who he is insulting . It is time that we shed all the respect we had for Ndii he has demonstrated who he is many a time and from now on He should shut up. Ndii shut up education does not take away who you are a NOBODY

@ RAS Menelik,I agree with you,that there is nothing wrong with sticking to our cultural mores that are positive.I have always said that,when culture conflicts with science,I will chose science. From what I have read,there is no scientific evidence for female circumcision.In fact there exists evidence to the contrary.I know that this practice still exists.Rather than the government punishing those who practice these customs they should be educated on the benefits of not practicing.
We should also remember that cultures evolve much like human beings have done on the cellular level Some of you will remember that Luo communities used to take out their from teeth.This practice has pretty much died on its own. I cannot recall atime when there was a campaign against it.We do not make fun of Maasai community when they put on their traditional attire.
We africans are our own enemies.For example,Science tells us that our dark skins evolved to protect ourselves from damaging ultra violet rays,which is something to celebrate.Yet we make fun of our dark skin sisters,and brothers to the point of them applying damaging skin lighteners.I bet before Mzungu showed up on the shores of africa,dark skin was celebrated,or at least not looked at negatively.Though I stand corrected on this.
Bottom line,we know when we are insulting someone.Ndii should apologize. Not because he has no freedom to speak him view point,but for insulting acommunity.Much like a racist using the word Nigger,though he is protected by freedom of speech laws.Offensive,but not the level of obscenity.

it is crystal why many cultures mutilate women. @maxely there is a difference in men and women circumsision . men we have learnt is hygienic

Furthermore there is proof that circumcision significantly reduces a man's risk of acquiring HIV.Whereas female genital mutilation has no health benefit it harms girls and women in many ways. it removes and injures healthy and normal female genital tissue, interfering with the natural functions of girls' and women's bodies. circumcised women suffer during child bearing . Hence no comparison . worst of all is complication during delivery

@ loise, I agree with what you have said.Me contention is that,whenever culture conflicts with science,I chose science.Can you tell me why female mutilation started?I dont see how it benefited people in the past,or present.

By the way, the harm you mention in female genitalia mutilation is aresult of" bad surgery",by the operator.Ithink Idid not explain myself well.What I meant to say is that if you circumcise a man , he will get those potential benefits you mentioned,but if you circumcise a woman, no benefit.Iam comparing benefits to benefits.As for suffering,yes awoman suffers more-no benefits.
The difference in circumcision is due to differences in the make up of the male- female genitalia,so they are bound to be different.No brainer there.
Other than being along held tradition,rooted in religious beliefs,male circumcision has never been on the basis of health concerns,in my view.

@Maxiley you cannot talk for women . we women have a right to choose if we want to be mutilated . so let us reach a mature age . stop destroying our bodies when we cannot defend ourselves ! I would bet your wife is not mutilated it was for selfish reasons men decided women have to be mutilated . The Islamic culture is best example you surely don't condone that search you soul dude

I guess you also have a right to chop off you middle finger. My question is why do that.If there are benefits from that sure,I will go along with your reasoning,and even support it.
Please note that these mutilation is done by women.Not men.
By the way, if read my post carefully, Iam against females being mutilated.

Most academically educated people happens to be the most morally and spiritually bankrupt.

Sigara kubwa man is frustrated by the handshake betrayal by Raila. Raila also betrayed Miguna and many others who died and suffered while fighting for him. Remember handshake talks began months b4 election but only Raila and Uhuru knew it. That's a huge betrayal

This is uncalled for. Why generalize people? If Ndii have a beef with a particular individual deal with that individual and learn how to respect culture. Every tribe in Kenya is unique on it's own culture and that should be respected and not used to put others down. Wacha unjinga our learned friend.

This is a joke. When you licked the boots and add of Raila, you didn’t know he is a kihii? Sometimes you act like a village boy who has not seen the walls of a classroom.

This has nothing to do with western education you are who you are regardless of how much you went to school education does not change who you are, it is a tool to better yourself so if your culture is okay with grown men being layuni or kihii accept your culture but do not shove it down other peoples throats

If someone is uncircumcised and you call them by their real name why is that an insult. It has nothing to do with education bec Luos are educated and still keep weird dangerous non sensical beliefs. Just culture of being kihii by choice.

Let's be honest. Kihii when applied to a man has never been used as a compliment or a term of endearment. Indeed I would say when the prefix changes from kahii to kihii signals the end of the term as affectionate.

do not forget the smelly smegma inside the foreskin

Opium still brewing in Ndii’s head! It is not his fault!

Forgive Dii for he is the one who circumcised DP Ruto but tucked the sheath on the lower side of Ruto’s pinus! So the are both half ihii.

But ndii is just stating facts luos do not circumcise that's the truth unless you want a lie.