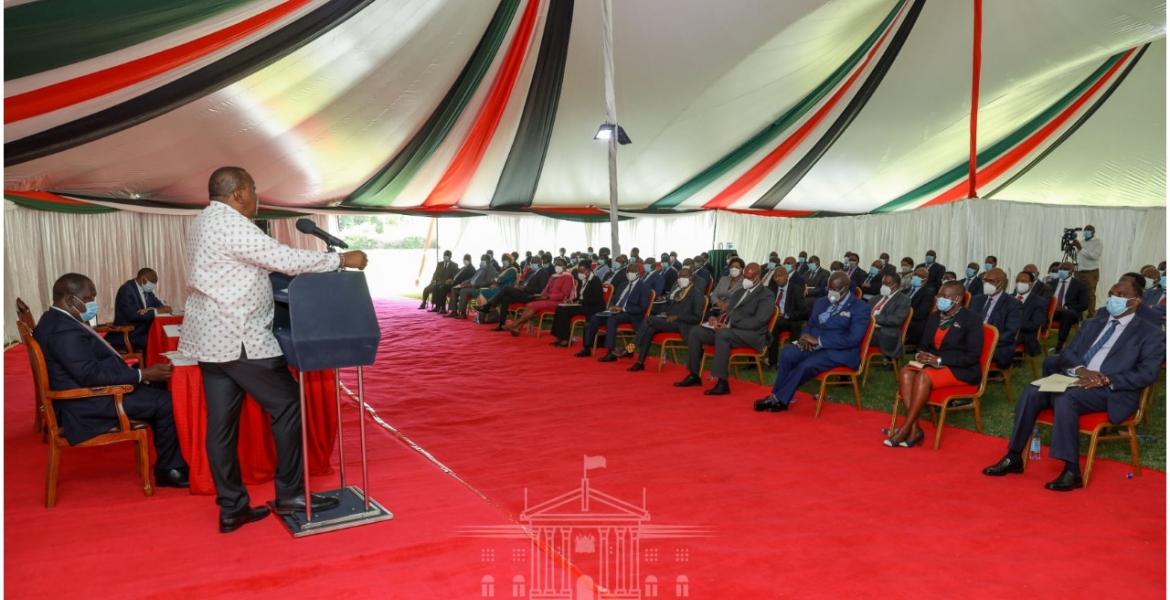 Kenyatta met officers in the senior ranks of the Executive to discuss government priorities for the current calendar year.

The leaders deliberated on the status of ongoing national government programs covering the Big Four Agenda and Vision 2030 flagship projects.

During the meeting, Uhuru outlined his vision and priorities for this year, chief among them, the completion of ongoing government projects and programs across all sectors.

But conspicuously missing from the crucial meeting that brought together Cabinet Secretaries, Chief Administrative Secretaries, and Principal Secretaries was Ruto.

It remains unclear why Ruto did not attend the meeting, but his absence raises questions about his cooperation with President Kenyatta.

Last week, Uhuru dared Ruto to resign from the government over what he termed as “doublespeak.” He said it was hypocritical for Ruto to claim that the Jubilee government has failed and, at the same time, take credit for its projects.

He added: “That is doublespeak, you can’t be speaking of the failures of a government where you serve while at the same time outlining what you refer to as we have achieved as a government. You better resign.”

The fact that uhuru cannot invite his DP for a meeting shows you how petty/shallow/myopic/insecure/short sighted he is. Government programs/development do not belong to uhuru but to Kenyans who have to pay a leg to finance them. Soon uhuru will be a "nobody" but Kenya will be there for my children and yours. Every time uhuru engages in his juvenile acts shows you what a con job BBI is. If you can show this level of disrespect and would ask junior officers to show contempt to an elected DP what will happen to your "selected PM/DPM?" Your conmanship has planted the seeds of mistrust that no one will ever trust the word of a politician and any coalition formed hence forth will be bound by blood in case someone springs "an uhuru con" What a shame. I cannot wait to see you get out of Kenyans lives since every day we see/hear you is a day in hell. That a young person can stoop this low - worse than illiterates who had no benefit of formal education is beyond me. All those people you met will be out in 15months- think ahead- beyond your nose.

You just sound like Uhuruto. No intelligent remarks. Just blubbering and planting BBI where you can't find a suitable word.

Look at him he has gained so much weight am I missing something here too much fish and ugali from Bondo.
When running the government becomes a one man show we are at the verge of dictatorship.

Uhuru and Ruto both need to resign.

UHURU wacha UJINGA.
Stop playing dirty politics.
Stop trying to justify ignorance and stupidity.
BBI or no BBI life goes on.
Stop acting like the presidency is an inheritance.
We understand that you have money and power...but you cannot hold on...
Please let Kenyans decide.
If not Kenyans are wide awake.
REVOLUTION is coming.
Kenyans are tired.
Time is here...leave peaceful or else....
Shit is fixing to hit the roof.

Read the story Ruto snubbed the meeting.Uhuru just needs to fire him so that he can continue campaigning for a job that he most probably will not get now that most counties are approving the BBI.The field is also getting crowded with the likes of Hassan Joho and Mukhisa Kituyi.He needs to gather his tangatanga minions pack them in a wheelbarrow and take them to Sugoi where he is headed.Elite chicken farmer or disguised thief does not look like you will make it

Fire him? Ruto is not like your kawaida VP under Moi - he was elected & cannot be fired. Uhuru’s the leader of the Forty government thieves who steal 2B a day from Kenyans is the one who should get the heck out of state house. Woefully incompetent, tail-between-the-leg guy, he should be nowhere near leadership whatsoever

@Francis what am scared to death is if BBI will be decided by petty MCAs for seriously they are petty and most of them have no education at all they are not exposed outside their doorstop. Imangine they are selling their votes in Western they want 500,000 half 1M cause they cannot go to the people empty handed . Kenya has become a one man's show our freedom of expression has been stolen from us but we keep on saying it is not a dictatorship which it is. when you are 18 eligible to vote you have a mind of your own but someone else want to take that away from us . how are we going to stop it? we were raised by our parents to be to be submissive to our seniors same in school we were taught not to talk back . now am older than our president i have traveled and lived in democratic worlds and i know what it means to defend myself of any accusation whether i loose or not . it therefore becomes impossible to accept to be dictated about BBI which i have not studied so that i can make a choice. My fellow men what are we going to do . for those of us who do not live in Kenya we do cannot imagine how it is with our families and Kenyans on the ground or effect of BBI let us support them in whatever way one way is asking the media to publish our views in all local media outlets . Kenya government is very happy about our remittance which keep the dollar floating yet we do not count when it matters to our welbeing

With a new prosecutor in Hague,muuaji Raila cannot dare course election violence or kill any other person for political reasons again.Uhuru should abandon the expensive BBI as it stands now,the savage is no longer above the law.Prosecutor Khan knows everything about tribal crashes or political violence in Kenya and will arrest muchawi with lightening speed if he kills anybody on loosing elections.

Daily Nation reports Ruto was rocked out which means Uhuru was chairing a BROOKSIDE thugs meeting.

Ruto has admitted that he wasn’t invited. Uhuru is doing it intentionally to hurt his Dp. Like I said many times Uhuru is in campaign mode. He is obviously competing with Ruto. He wants to come back to rule using BBI. That explains why he is on national bribing rampage. BBI is personal to him. Otherwise why would he be fighting like hell, using his own time, personal and government resources to it succeed.
He tells us that BBI is meant to unite the nation while he is the one causing unnecessary divisions. Fighting like a little kid !

Ruto has no spine to withstand the political heat from those he labels big names. As you can see @assista, he is gradually being destroyed by the president to a point by the year’s end, Ruto will be just a common Joe! You are supporting a fallen tree in Ruto! His condemned wheelbarrow narrative will be no more by mid 2022! And you man will be ridding in the oblivion of Kenya politics come October 2022! Please put this message in your official calendar for a future review!\1

This is a good example of reporters advancing their political interest instead of serving their audience. In such a simple issue, the reporter should have contacted the State House for clarification.

We are going to have to see what the high court is going to do about this BBI. They appeared to indicate that they were not a fan of this BBI. We will have to wait and see what their final decision is going to be. I think the courts in Kenya needs to take up the burden of protecting the Kenyan Tax Payers Money. These MCA's as well as the Executive Branch of govt at this current time are on a very extravagant streak. Why would you mandate the central govt to pay out 35% to the counties? Doesn't the Govt already owe the counties at least 100 billion shillings with only a 15% minimum requirement? Why would you add the number of county govt? and the number of MP's by around 200? I thought that UHURU's signature complaint was that the wage bill was out of control? We all know that having more MCA's making decisions about tax payer's money will only lead to more waste and corruption. Have they thought about, what effect will increased consumption of tax payers money (by corrupt and extravagant payouts to the likes of the MCA's) have on the public mood and disposition of the masses? Why not use smart government programs to address the current issues and problems that we have.
Secondly. Why fight soo hard for a prime minister and 2 deputy prime minister positions; if they can be APPOINTED and FIRED by the president? The prime minister and deputy prime ministers will serve at the PLEASURE OF THE PRESIDENT, so why fight soo hard for these positions? Why not stay the course with the current constitution that we have? The 2010 constitution has only been in effect for 10 years for goodness sake! Thirdly, rather than amending the constitution, why can't we adopt the political tradition of ACCEPTING DEFEAT once someone is defeated during elections. Seems to me that that is a much more appropriate course of action to take.

In politics there are no permanent friends or permanent enemies. This duo friendship like many marriages is going through a rough time or it’s probably over. When the two men came together to campaign for the high office they were equals but after the elections. One became the boss of the other. They just didn’t get along. Things can really get complicated.