Uhuru in Kayole: Babu Owino Would Have Stoned Me Today Were It Not for the Handshake 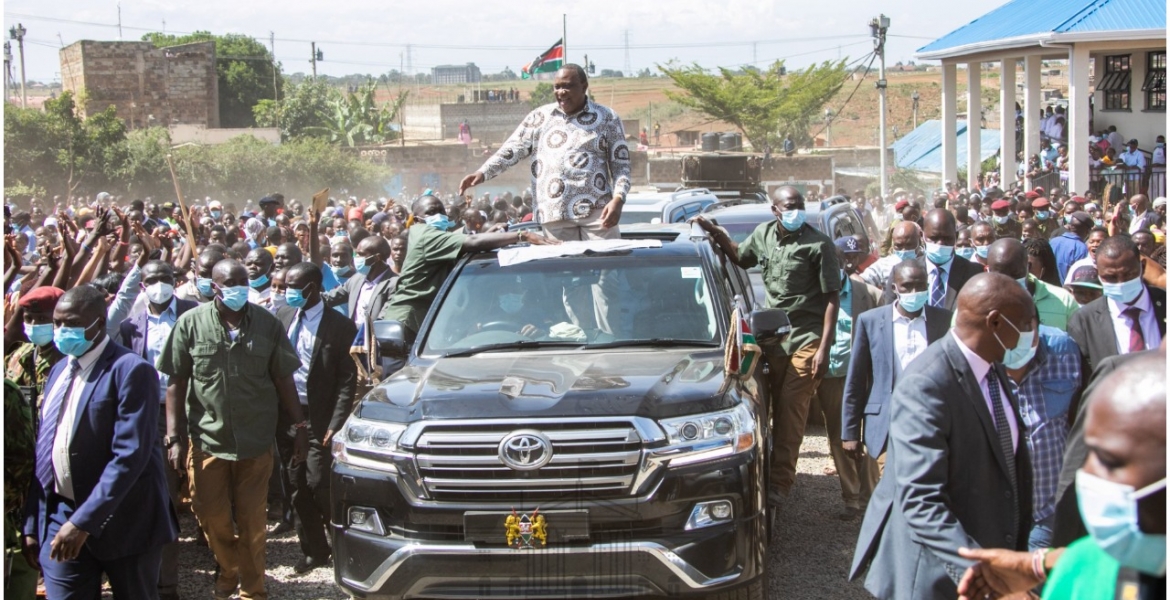 Speaking in Nairobi’s Kayole area, Kenyatta said BBI is the solution to unending political hostilities among Kenyans every electioneering year.

The President spoke after launching the Soweto Level II Hospital and Community Water Supply Project, which was done by the Nairobi Metropolitan Services (NMS).

He pointed out that due to BBI and his handshake with ODM leader Raila Odinga, he can freely visit areas previously considered hostile, including Embakasi East Constituency under MP Babu Owino.

“Kama siyo handshake huyu kijana hapa Babu Owino angekuwa ananitupia mawe hapa (Were it not for the Handshake this boy here Babu Owino would be stoning my motorcade),” said Uhuru amid cheers from the crowd.

At the same time, Uhuru hinted that the Kazi Mtaani Program, which is scheduled to end on March 4th, might be extended.

“When I was in Uthiru and Kiamaiko, and here, the youth have said they want Kazi Mtaani back, do you agree with them? Let’s see what we will do to have the program back,” said Uhuru.

The program was launched last year to provide social protection for casual laborers and youths impacted by the COVID-19 pandemic.

Under the program, beneficiaries are entitled to a weekly stipend of Sh1,000 which is remitted through mobile money transfer.

Babu Owino should be cooling his heels in jail not out on the campaign trail.Biggest failure of ODM not demoting or firing him.BBI does not guarantee election peace or no tribal clashes and stone throwing is not done by a specific community .Stop with the stereotypes and lies.

This is a very weak man. Babu wino insulted you and your mom calling you mtoto wa mbwa. You did nothing about it. Babu Owino shot a man in the neck with a gun. He is still a free man. Raila forced himself into mkate nusu with you and you're still delusional calling it a handshake. Leadership is not for cowards or simple minded- its a tough calling. You need to go home and leave Kenyans alone to decide their future.

Weakest president we've ever had. After that singer danced and sat on the presidential seat I knew umekaliwa sana chapati. Hauna mbele wala nyuma..

Baba Owino is in court for attempted murder.

It’s not the handshake that is stopping him from stoning you, it’s a court case.

If you are scared of Babu Owino with a stone; how scared are you of those whose blessing is the sword.
No wonder the country is heading in the wrong direction. Writing is on the wall, we are moving away from the world of Physical might to a world of Spiritual might.
As a President, the only person you should bow to and humble yourself before, is your God.

Fear only he who can destroy both the body and the soul. (GOD)!!

Magical handshake has not shake off corruption,unemployment and ever increasing crime.Could you please have another handshake to ride Kenya of these vices?

Seriously UHURU, when are you going to stop being an idiot.
Siasa za UJINGA wachana nazo.
You've lost direction.
You don't have no basic leadership skills.
Wachia wengine watawale.
You're a failure.
You're government has FAILED miserably.
All you care about is your belly and nothing else.
SHAME on you.

We don't care about handshake