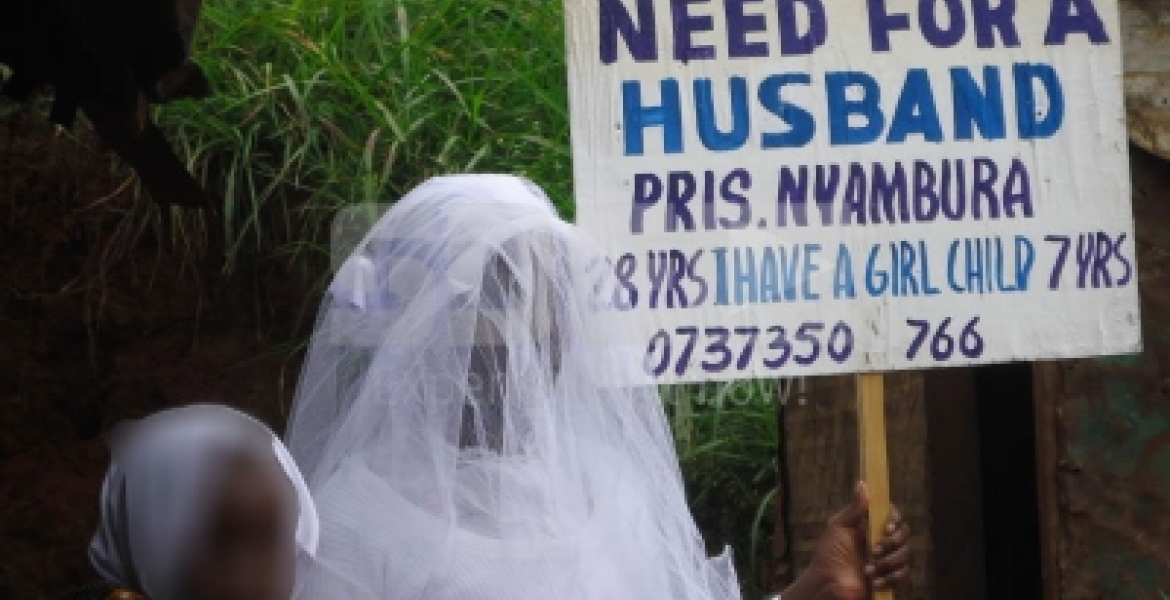 Priscilla Nyambura, the woman who hit headlines last month after she was pictured on a street in Nairobi holding a placard in search for a potential spouse has re-united with her father.

The 28-year-old, clad in a white gown and veil and accompanied by her seven-year-old daughter, used the placard, where she provided her mobile number for suitors to reach her.

Administration Police officer Moses Kamenchu, saw Nyambura and decided to trace her to her Kayole home through the phone number. He would eventually link her with her father, Zachary Kimani, after 22 years of separation.

Kamenchu got Nyambura's contacts after her photo went viral and after learning she hailed from Murang’a County. He says he was touched by her suffering and decided help her. “The need for a spouse was to support her and help care for her daughter. She has been living a pathetic life in Nairobi, thus the need to be assisted by well-wishers. She is a hardworking person despite the challenges,” said Kamenchu, who facilitated counselling for Nyambura's family before the emotional re-union.

Ever since she carried the placard, she has been receiving numerous calls from suitors, but a convict on a 35-year-sentence at Kamiti maximum prison has been the persistent caller. She said the man has been begging her to wait for his release, as he had lodged an appeal of his sentence. "He has been updating me on the pending trials in Limuru and Kisii courts, all related to carjacking. But that's a long time to wait for a potential husband," Nyambura said.

Nyambura is said to have escaped from her father’s home in Githiga, Kangema, Murang'a County at the age of seven, shortly after the demise of her mother. She had dropped out of school while in class two after her father could not afford paying fees. She moved to her uncles who facilitated her living until she got a house help job in Nairobi. Her father, now in his 70s, had a cock slaughtered and a meal prepared to celebrate their reunion. Kimani said that lack of resources made it impossible to search for his lost daughter. "It’s the first time I am seeing her in a long time but the problems that contributed to her walking away have yet to be resolved," he says. “All those years I never saw her but through friends I knew she was in Nairobi, struggling. I only came to know of her 'wedding' through friends in Githiga market as they showed me her pictures and I could not understand it,” he said.

“The stress has been part of my life as lack of education became a major hindrance to get employment even as a house help. Many of the employers reject my services upon realising that I cannot help their children do their homework,” Nyambura, who now wants to return to school if she finds a sponsor said.

The family of her ex-husband rejected her after learning she was a Standard Two dropout, she said. “It is true that I am illiterate but my daughter has helped me to write my name and count,” said Nyambura.