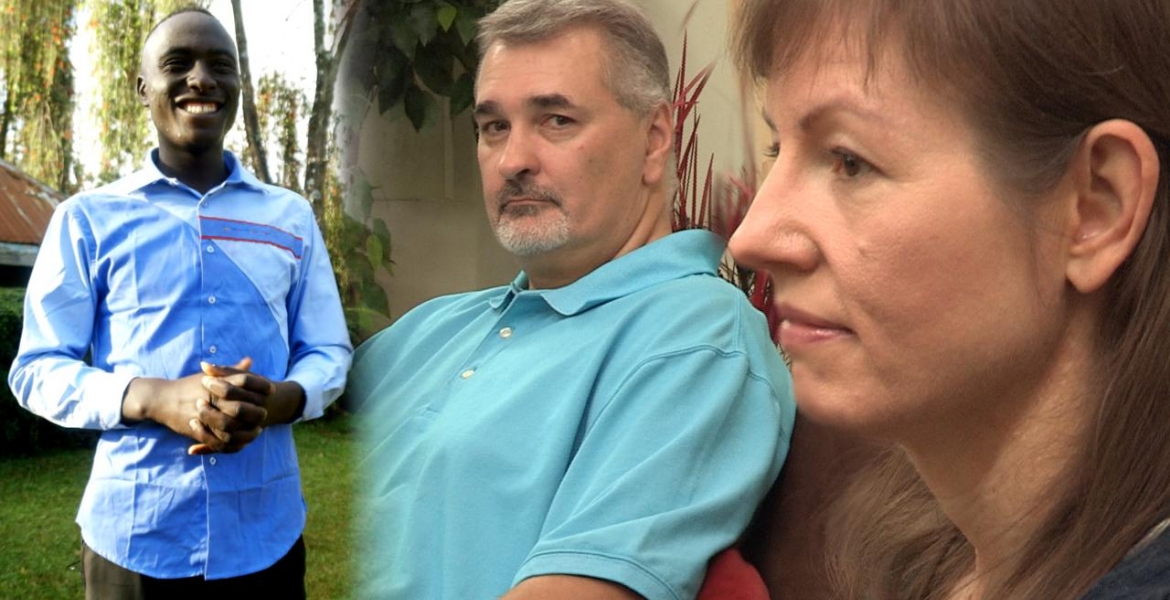 An American woman, a mother of four, says she is leaving her husband of 18 years for a Kenyan man she met online but whom she has never met in person.

Sarah says she is love with Kevin, a 26-year-old man from Kisii, Kenya who says he is a pastor. Sarah told US talk show host Dr Phil McGraw she has started the divorce process from her current husband and plans on traveling to Kenya in February to marry Kevin.

Her family say they are worried for Sarah, and fear she is being scammed by “Kevin”.

On a recent episode of the Dr Phil Show, Dr Phil hosted Sarah, her husband Keith, as well as Sarah’s father. Dr Phil also spoke to Kevin live via satellite from Kisii, Kenya. The two men - Keith and Kevin also exchanged words live on air, with Keith warning Kevin to stay away froths wife. Keith also castigated Kevin over how someone who claims to be a pastor could covet another man’s wife.

Apparently this is the year for the Abagusii or is it next year.Jungu is looking for some young love in Kenya

You can tell his shirt is brand new, haijaoshwa nor ironed, just the manufacturer's fold lines! Lazima ang'are for the TV appearance; perhaps 15 mins of fame! Kisii yawa!

The 2 Crazies have NEVER met; so it seems nothing but INFATUATION:an intense but short-lived passion or admiration for someone or something.

Most likely this is a beach-boy and after this woman money. She will get those Kisii tempter. Somebody should tell her run baby run. They dude is 20 yrs according to his id

Sometime ago there was a kenyan woman looking for a white man to marry. Perhaps she should connect with this desperate husband and the two couples can wed on the same day and live happily ever after.

Now you can see why I have a problem with followers of the son of Mariam ( Yeshuans or Christians). Now that the Kenyan government knows about her, she should be denied entry in Kenya. Her name and picture should be posted at all points of entry in Kenya - roads, airports, and sea ports. She is mentally unstable and committing "international incest" so is her fake lover and a blind follower of the son of Mariam.

Keep Jesus out of this.

Why not blame the union between the devil and the man? It's not fair to make generalizations, some christians are not hypocrites.

I think he meant to say "International Adultery".

They will find a way to murder Kevin. Quite absurd indeed.

I wonder how old is this woman.But one little piece of advise: Before you actually fly to Kenya to marry Kevin, you must understand that Africans must have mpango wa kando besides their weded wife. In other words you will have to share your husband and money with other two or three women out there.
GOOD LUCK WITH THAT.

Mbingu, if this fellow is atrue christian, then he will have only one wife. Just about all pastors I know in Kenya have one wife despite coming from culture of polygamy.But I would question if he is really a man of God,just because you are apastor does not mean you are following God's word. It could just be ajob like teaching.
My concern is for the husband who is begging his wife not to go.How can you sit there with someone who clearly does not fancy you anymore. Go find yourself another woman.A Kenyan.Agood number seem to take aliking to white men.Especially those whom you will lift from poverty.
Blame the internet.Anyway, what was amarried woman doing meeting men online.The husband must not have been fulfilng his responsibilities well.And if he was,then he is better of without her.
I just hope that mzungu does not turn into a murderous rage when he discovers that wife ,soon to be ex has been western- unioning his retirement savings to Kissi.

@Guest1. As I have shared my views on this issue many times. I still believe very strongly that you only borrow what you don't have. The only item to borrow from our external ( outside of Africa) brothers and sisters is adopting the use of "appropriate technology and efficiency through it." Anything else is an insult to our ancestors!

That's why I don't respect or recognize any foreign religion and the political aspect attached to it known as "democracy."

@Guest1: I would like to refresh your mind that 113 years ago today, a meeting was held in Berlin, Germany about the partition of Africa. It started on November 15, 1884 (same date as today) and ended on February 26, 1885. After this conference, Kenya fell under the leadership of our British brothers and sisters. That is the origin of our speaking the English language. If they (British) were members of the Hindu religion, I believe by now, majority of the Kenyan people would have been Hindu strong believers and followers now! You (my brother) happen to be a believer of the colonial masters religion (Yeshuan/christiniaty) that s/he indoctrinated our ignorant and helpless, brainwashed ancestors!

Imara. This so-called pastor is a Joke and a Con. He belongs to Jail.

One is after easy money, another illicit love and the other is out for revenge-a deadly combination. No one will be happy at the end of it all.

Guest1: I meant "133 years ago" today - The Berlin Conference. Not 113 years ago as I posted earlier! Samahani sana Ndugu.

Mid life crisis gone wild. This woman does not even care about her children. The Kisii guy does not know American have guns. The biggest mistake he can ever do is marry her and come to America. If he step in USA he will go back to Kenya in a casket. Wacha kucheza na bibi za wenyeye

I agree; Midlife Crisis She could be on MEDICATION too.

Hey i would love to talk to your wife, been in America for too long, and the devil is a liar and would love to talk with his wife, she needs to know “Witchcraft Is Real” and needs lots of spiritual Prayers intervention and in Africa it’s real, Mark:10:9 says that “Therefore what God has joined together, let no one separate” my dear am a Kenyan and our men are gamers/players honey,are you ready to get abused and be added in a polygamist lifestyle, do you understand adapting African culture is the most hardest thing, you better be glad God gave you a caring loving husband coz if he was a jerk, he would let you go and suffer there, better the devil you know than the angel you don’t know, call me if you need anyone to talk and understand what you are putting yourself through, through experience on both races my dear, God help you and open up your deeper eyes of wisdom 🙏🏽🙏🏽

Meanwhile: She needs to RESIST this African DEVIL.

Hey and would love to add she needs to know majority of pastors in Kenya are in business not for God remember in the scriptures Isaih 8:20 To the law and to the testimony; if they speak not according to this word, it is because there is no Light in them!! Be careful and am here if you need the reality!!

Mso, if this married woman followed the scripture they way you do,do you think she would be leaving her husband? Especially for a young "boy". Who is the "adult" here. She has been married for 18 years.Could it be that she it tired of living with that man?
And would it have made any difference if she was going to england to marry a rich "white boy". I think so.

"International incest" is when you are sexually involved with a member of the opposite sex from a different country who is old enough to be your mother or your father.

Inest involves ALL Blood RELATIVES (Grandfather or Grandmother with Grandson or Granddaughter; very rare, Fathers or Mothers with Daughters or Sons, Brother or Sister with Sisters or Brothers, Uncles and Aunts with Nieces and Nephews, Cousins etc.

A lot of things could be going on right here.
The wife is divorcing the man why don't thy stop her instead, and if she has indeed stopped loving the husband no matter what thy do she will go not only to kevin but to someone else.
I think thy are attacking kevin based on the fact that she is African. loosing your wife to an African hell no. if it was a white guy thy would react differently.
A woman who is loved and taken care of and satisfied cannot go looking for love else where.
love your wife as you should husband or she will be gone not just to an African guy but to the next door neighbor. you have failed somewhere.
and the more kevin is attacked the closer and tight thy will be.