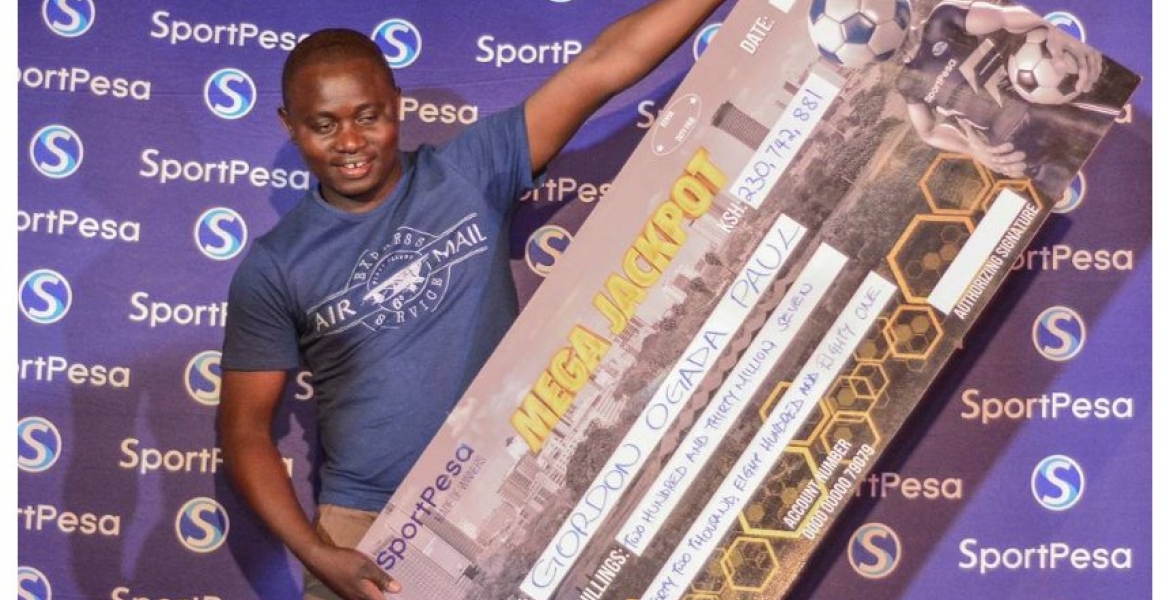 Speaking during an interview with the Nairobian, Gordon said he was 'ashamed' of the way he spent the cash.

“After this kind of spending, I honestly feel embarrassed because sometimes I don’t even have a dime. I am no longer able to help my friends and relatives financially,"He said

"They think I have loads of cash, when, in real sense, I don’t have money floating around,” Ogada said during an interview with the Nairobian.

While Samuel Abisai, who earlier won Sh221 million Sportpesa mega jackpot, invested his cash in businesses, Ogada opted to use his cash to seek luxury.

On how he spent the millions, Oganda said, “I bought a house here in the city and a few cars, besides other investments here and there. All these cost millions. I’m literally drained of course. I might have made a few mistakes here and there. But largely, I did fine. I think I would be more responsible."

After being announced the winner of the SportPesa mega jackpot, having correctly predicted seventeen football matches, Oganda was captured dishing out cash to cheering crowds in Kibera, where he had been living.

"You can never pour from an empty cup". People who help others to the detriment of themselves and their own are stupid to say the least. The most empowering word is "no". People will respect you more for saying no than the frequent yes. Watch the ruthlessness of your so called friends and relatives now that the money has run out.

One can not phrase it better. Thanks for your wise words.

You do not grow wealth by spending. You make money work for you by investing prudently. This guy was a spend thrift and that is why he is broke. Live poor to get rich.

A fool and his money soon part. There’s no next time as he is suffering from incompetence in judgement. He would even be better putting the money in an offering basket.

This guy says he bought a "house, cars and investments here and there" all of which cost millions. Admits he may have made a few mistakes but overall he is doing FINE. What is the big deal and why the quick judgement? The man just wants to be left alone. Ati broke four months later? What a negative connotation? Please lets relax and take a deep breath on this one.

I am wondering the same here @Mugikuyu. How can he be broke when he bought houses for cash and made cash investment? Or is it our knack for a ka-quickie that we jump to quick judgement even with a mere 7 paragraphs of detail on Mwakilishi? Jameni

@Anos, someone told me we Kenyans and Africans at large don't pay attention to detail. Could it be so? I'd hate to believe it.

A lot of people simply do not understand money. For example fact that you could be worth millions (wealth) but be broke (no liquid cash) There's a huge difference between being RICH and being WEALTHY, folks! Many WEALTHY folks are often broke which doesn't mean they are poor. Right now, as I await my settlement from a recent biz transaction, I am broke and some bill are waiting - am I poor?

The dude want to tell people in a polite way wacheni kunisumbuwa, do not disturb ati so and so child does not have school fees, so and so is sick, pastor want the tithe & offering, harambee etc

Wrong notion he is candid vividly telling lies.If he invented wisely then he is stinkly rich as he had won.Had he kept it lying it won't have bore anything wait and get to hear from him.Let's not be quick to judge him on mere maliciously cooked allegations based on suspicion.Remember the guys in the Bible who were given some cash-one kept it safe not investing while the other one invested and it bore profit and more was added unto him.Brother all is not lost when you invested wisely be blessed.

Have you confirmed this with his banks before going to social media? The guy is smart, media people are stupid!!!

This guy is tricky unlike the former winner. know, all is void under the sun so be honest

He is just telling his relatives friends and other people who are disturbing him to keep off.. in Kenya we have seen people saying they dont have money and still see someone progressing. Even in church people will say they are drained of all money they had that sunday only to see them afterwards doing big shopping..

The guy is a smart one. plz leave him alone.Relatives and friends may be disturbing for the money, and yet, he solely looked for the " stalk" and as an individual betted. Why do you want to have a share?????? Style up!!