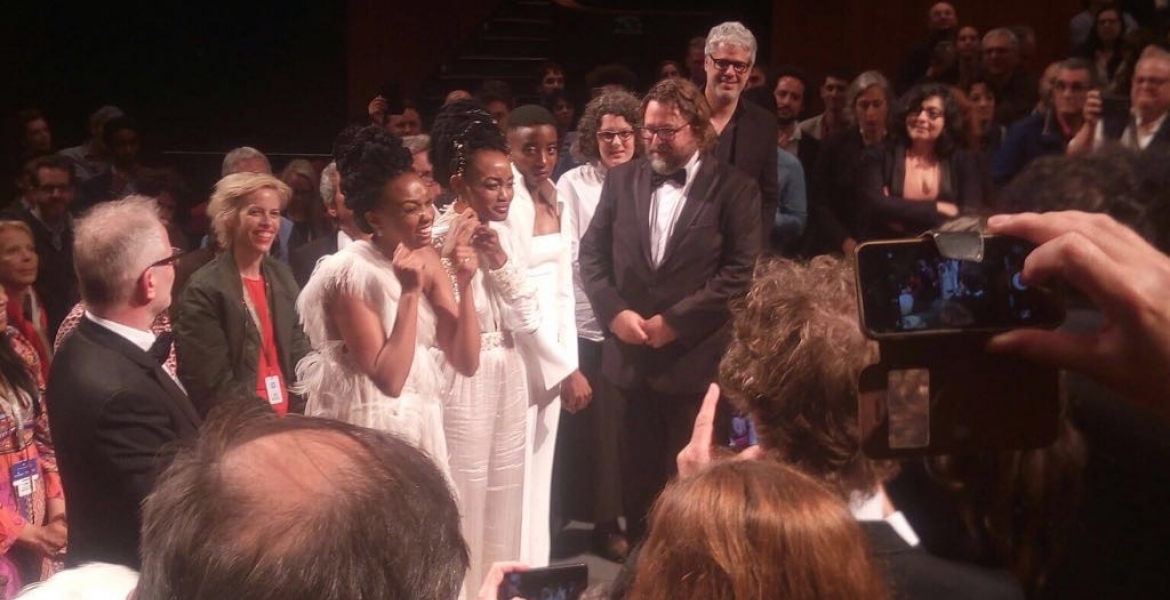 Wanuri Kahiu, director of the proscribed Kenyan gay movie Rafiki and two of her cast members received a standing ovation when their controversial film premiered at the Cannes Festival in France.

The three women, all dressed in white, were overwhelmed with emotions as delegates applauded them for the film that has been banned from showing in Kenya. Rafiki is the first Kenyan feature film to be selected for the prestigious festival in France.

“Africa is always depicted as a place with lots of pain, suffering, war and disease,” Wanuri Kahiu said at the event on Thursday.

“Our ambition is to make sure the image of Africa is also fun, joyous and full of hope. Afro bubblegum’ is a genre we just invented — it’s fun, fierce and frivolous work coming from Africa,” she declared, with a smile that could stop traffic.

“Unfortunately not enough people know about the way people live in modern Africa. Usually when you see Africans you see them in villages carrying water on their head. I have never carried water on my head in my life,” she laughed.

“We want to celebrate African urban pop culture,” she said. Kahiu’s optimism extends to her own film, convinced that one day the ban in her homeland will be lifted.

“We have experienced films and books being banned in the past and now they are absolutely available in Kenya. Sometimes art comes out from exile.” the 37-year-old said.

Ms Kahiu said she does not regret making the controversial film and expressed her disappointment with the ban by the Kenya Film Classification Board (KFCB).

“We know we live in a conservative society,” she said, “and we had hoped for an 18 rating even if the film is quite tame.

“The love scenes are actually cute, they are fumbling and naive, they don’t even take off their clothes. The girls would not know what to do. It was about their innocence,” she said.

“We just wanted to make a love story and the one that stood out the most” was the “Jumbula Tree”, a short story about the Ugandan Monica Arac de Nyeko — “just because it is such a beautiful coming-of-age story."

“The other stories I was reading at the time were not as soft and kind,” she added.

“We’re having a conversation not only about the LGBT community but also about freedom of expression and the right for artists to express themselves.”

KFCB CEO Ezekiel Mutua banned the film arguing that its contents goes against the morals and cultural believes of Kenyan people.

“Our culture and laws recognise family as the basic unit of society. “The (board) cannot, therefore, allow lesbian content to be accessed by children in Kenya.”

Cannes Festival is an annual film festival held in Cannes, France and previews new films of all genres, including documentaries from across the world.

Who cares?? Let the evil stay where it belongs.

Wanuri Kahiu? The name Speaks of Itself. And this is the Mess the Irresponsible and Possesive Gikuyu put us into (when he Abused his 9 Daughters: Wenyewe kwa Wenyewe (INCEST and Homosexuality to Boot).

LoL. You should be a psychiatrist. Best advice G1 has ever had. Pro Bono.

Who questions GUEST1/IPhone4G when he is bathing at AWASI RIVER BONDO accompanied by her/his grand(fa)mother,wife or husband,h(er)is children,grandchildren and siblings?Leave waKahiu & Co alone but she must also know others have their own freedom of choice.I hope she will contact me the moment she gets JOTO towards a man.SAWA MAMA?

people should realise that being gay is not a disease,they're human as well and deserve some love and freedom to express themselves