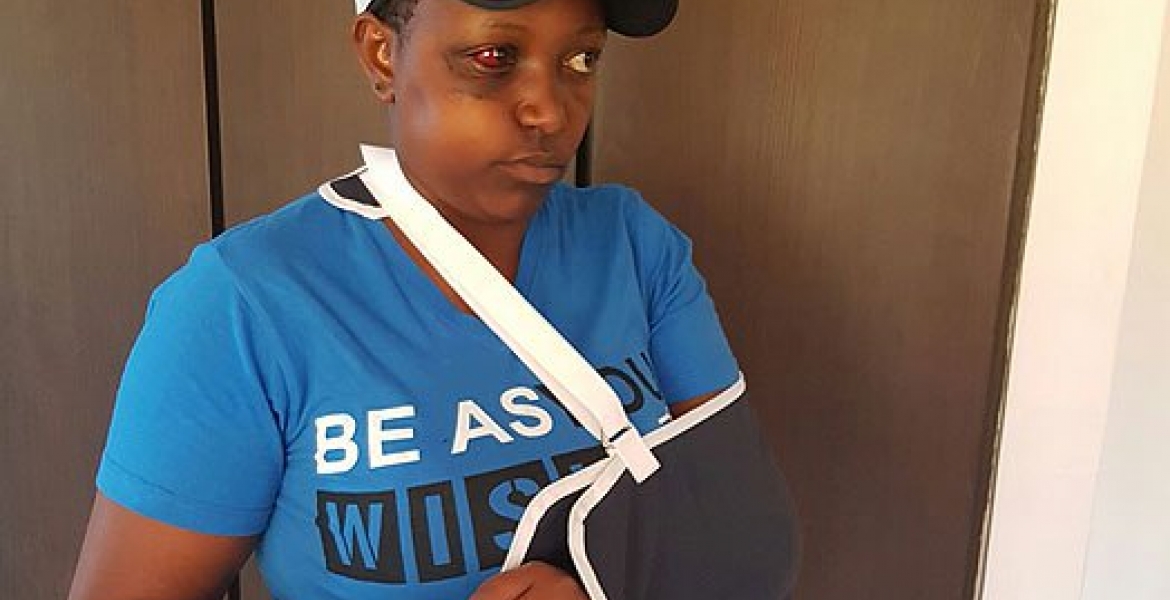 A female member of Nyeri County Assembly was forced to cut short a bench-marking tour to Arusha, Tanzania after she sustained serious injuries following an attack by a male colleague.

Magutu MCA Pauline Wanjira said the male colleague hit her using a bottle of an alcoholic drink on Wednesday while at a pub in the city.

She said the attack is linked to supremacy battles in the Nyeri County Assembly. Ms Wanjira returned to the country on Thursday for treatment. She sustained injuries on her right eye and hand.

The Ward Representative had in the past accused Kirimukuyu MCA Anthony Dagita of physically assaulting her, but no apparent action was taken by police.

That stupid fool should be arrested! What a moron!

Hey Bwana. The time NYERIan Women dominated us are Over; and Long gone. No more Losing our TRANSFORMERS to them Women just like that; we have to go Defense by Tooth or Nail; or both.

Guest1: But you are a woman. How did you get a TRANSFORMER? Aaii!

You are so fucked up.

Sad, but not surprising when Kenyans use the LCD as our criteria to elect our leaders. We as a people need to wake up.

Wanjira(Onroad/Onway/Onpath/On verandah which maybe KOINANGE St.)should tell Kenyans why she accompanied/followed Dagita from Magutu to a bar in Arusha City.One thing is that they had gone on a private mission using our money.But i wonder why she have to seek sympathy from Kenyans yet she had not informed us about their date.

Moral of the story- don't go drinking with your work buddies because when they let loose there's no telling what is going to happen. And why were they in TZ anyway, drinking? Disgraceful. Should have been in Nyeri serving their constituents.

These are our leaders in action.
Regardless of what provoked the battery.You do not beat up awoman. For that matter any human being. Wow,with abottle of beer!This man should be locked up for 15years.Idont usually encourage people taking law into their hands,but there is always an exception.Such is this case.If iwere her husband or boyfriend.He would be dealibg with me no matter how big or tough he might be.There are way to neutralize that toughness.Terrible example of manhood.Ihope he is not thumbing his chest that be beat somebody badly.

These animals need to be caged and kept in Kenya. Hizi aibu zibaki Kenya. Both the man and woman. Useless.

That is what happen when people decide to misuse the tax payers money. eti bench-marking tour to Arusha, Tanzania.

This mad is coward,why not go for another man,bure kabisa wewe jamaa, lock him up 20 yrs and up

I wish I was a judge given such cases, i dont need investigations, only proof then ndani no repeal period

@msjor tingatinga... me I got fed up in doooo much clap And started my law classes... wacha nikuambie, when I get the crown 👑 I will function and fight every bit of these nonsense pple just wasting time, embarsssunf and going against the law ..... THANKYOU for your insight ...

The man who caused this bodily harm should be fired immediately and prosecuted in order to set an example that, it is okay to disagree,,but you cannot use inappropriate language or physical violence to settle the disagreement.