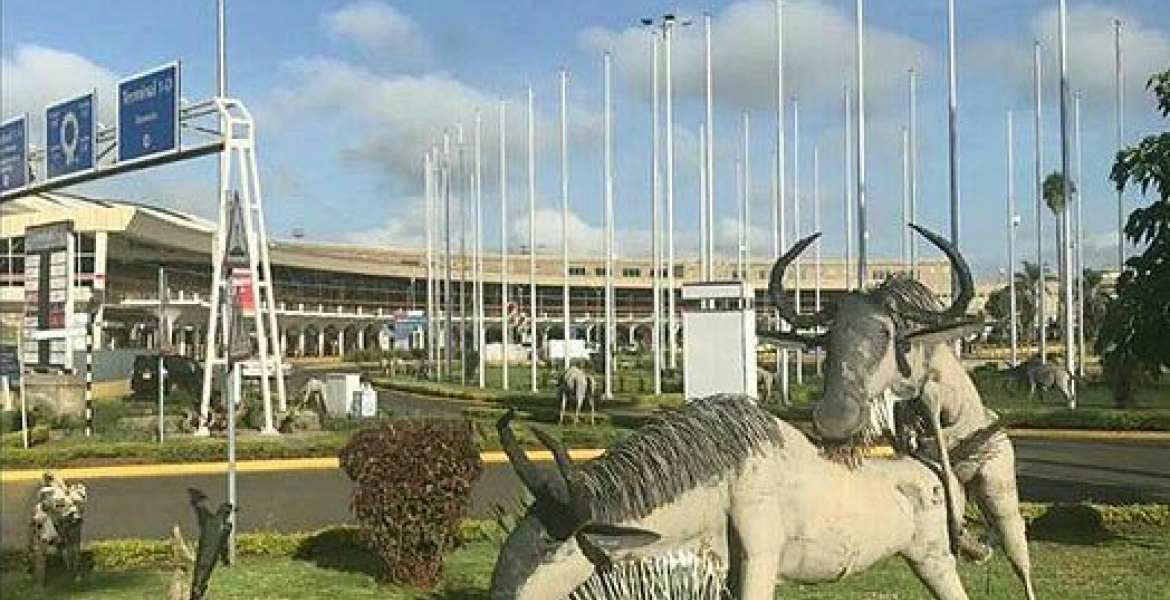 The sculpture shows the two wild animals mating. Mutua has described it as a “sexually suggestive” and questioned its relevance at the facility.

“This sculpture is bizarre and thoughtlessly sexualized. The sexual connotation depicted in this sculpture adds no value to the marketing of Kenya to tourists arriving or leaving JKIA,”  Mutua posted on his social media pages.

“It's the work of a dirty mind trying cheaply to sell their creativity. It is not different from the dirty minds who sexualize adverts on TV or on outdoor advertising."

“This sculpture would not lose any value if the animals were simply grazing in their natural habitation. The mounting aspect sends a wrong message and the sculpture must change,” added Mutua.

Mwangi tweeted: “Hey @EzekielMutua there is a wildebeest sculpture at JKIA that requires your intervention!”

Mutua concluded: “It (sculpture) fails our suitability criteria for content or information meant for public exhibition. We should not allow such bizarre ads and marketing strategies that are meant to create unnecessary sexual innuendo. We need to sober up!”

Mutua is famous for his 'bold' actions against any material that goes against the moral and cultural believes of the Kenyan people. He recently banned a Kenyan film, Rafiki, over its gay content.

+27614426924 is the number I called and changed my life financially
I never trusted it whenever I read about money spells online until recently when I tried a magic ring for money and short boys from mama.These were so powerful that they managed to change my life financially within days, I was so impressed with the short boys because mams gave me a chance to ask them for anything i wanted daily and they made it happen without any conditions. For the magic ring am moving with it all the time when going to do business and i can tell you no one has ever rejected my business proposals leading me to get many contracts which give me alot of money at the end of the day. Am satisfied with her work and truely thankful for her help, contact her by a call or whatsapp on +27614426924.
Tlhabuswe from kasane

What are you trying to sell to readers? Just saying "Change my life financially" doesn't mean a thing. What properties (investments) do you have now that you did not before the change in life? If you want to advertise whatever is changing your life, purchase space on Mwakilishi.

Mama. South African KENYANS are Con-Artists. So Watch Out!

In the 1st Place: Who is this Self-Declared "IMMORAL Moron" that Erected this Sculture? Kweli Kenya hii?

I agree with the moral police on this one. That sculpture in annoying.

There is a sculpture of a naked man with a penis at United Nations offices in NY.Never had people clamour for irs removal.

This is the MORAL Kenya; not the Immoral US. Anyway: Is the Male Sculpture (in NY) shown MOUNTING a Female?

Moral Kenya where only sex is immoral,but corruption, rape, prostitution, killings, stealing, cheating are moral right?Yes, I am ready for you to say I am twisting things. Kenya is very moral indeed.

Loosen up folks.This is art.Does sex have to be on your minds all the time.

Maxiley. It's a No-Brainer that Sex was on the Male Sculpture's mind.

How do you know it was amale sculptor ? Besides that anyway, the artist does his or her work with the public in mind. Therefore, the sculptor had in mind you would think of sex.And he/she was right. Look at your reaction.

Surely, on this one I don't see the bigi. If it were human, I'd say disgusting...but of animals it looks so natural...especially for a country that prides itself with the animal kingdom...for tourism it is a big sell ...telling by the price of a video clip or photo of 'animals caught in the act'...it sells big $$$. For locals, we've seen that quite some and enjoyed watching...also it's a good way to introduce kids to procreation and/or sex if they get curious and ask......etc etc

@Just me.Do I understand you as saying that sex between human beings is digusting.Come to think of it you may be right. That's why even adults dont want to think that mom and dad accassionally roll in the hay...Cant imagine pop hamping on top of mom.Hgghhhhrrr.Disgusting.No.not my parents.

NO. If I changed that animal art you talk about to a man and a woman, at the same location,same angle.....to me it would be repulsive....UNLESS of course it's Pompei.

Iwas just being facetious...Iam sure you got it.

You hypocrites sex is part of life. It is no big deal and what is done in between the sheets comes to light...like increased HIV cases and other diseases amongst kids. Kids pregnancy etc. If you are so perfect why do we still have so much promiscuity and adultery in Kenya. Please. Give me a break.

Utter stupidity. Nothing wrong with picture, this guy is a moron.

Utter stupidity. Nothing wrong with sculpture, this guy is a moron.

Funny! I guess I should erect a bedroom for my cows and sheep when I need them to be mounted for purely reproductive reasons, now that mounting of animals in public is likely to be banned. Too much fake piety at work here. Tell us how this art is bothering you, not how you think it bothers others. If you can't take your mind off sex, that should be your own shauri.

Really? I have never even paid attention to this at JKIA. A natural occurrence I grew up seeing animals partake now it's immoral? I saw bulls and cows all the time and it never occurred to me that it was immoral, I saw canines do the same, cocks and hens, but all we did was chuckle and left them to do their business. This is in a country where people f%$$$ left and right- in bushes, in motels- others getting caught in the process. Gimmie a break ! Whoever this person is should get off from that moral high ground he is on - holier than thou.

@ Formerlyguest2, I am thoroughly impressed with you modesty in expressing adult contents.And am still scratching my head wondering how it could be immoral for animals to"partake".
I read somewhere that chimpanzees and bonobo monkeys like Partaking" just like human beings in fact females initiate more that males(some men would love this).
Now can you imagine if that sculpture was of two bonobo monkeys"partaking" bearing inmind our likenss to them(our cousins)..This Mutua fellow might even set it onfire.Or hang himself rather than live in acrazy world,that gets crazier by the day.

Yeah.Frustration for missing out on eating the apple...

Tha sculpture needs removal otherwise Kenyans should decide to have it stay or removed. We do not have to be copy cats. If it is in New York, we do not have to have it. Why can't we have some standards of our own. How many of our creative structures are in New York. When will we be represented by our forefathers and not by foreign cultures. It starts by one, then writings are foreign (Chinese), Language is foreign, names are foreign. Just a thought!!!

I was one of those people who was always suffering set backs;little seemed to go right for me,money always passing through my hands and always dogged by sheer instances of bad luck,no progress even with all the years i worked,anxious and worried about the life and future of my children,family pressure until i sought the help of a very powerful traditional healer called Vuka "+27617874648" whose 'jujua oil' has since changed everything from my work; finances,relationships.contact her for any help. agentadams64@gmail.com www.mamavuka.co.za