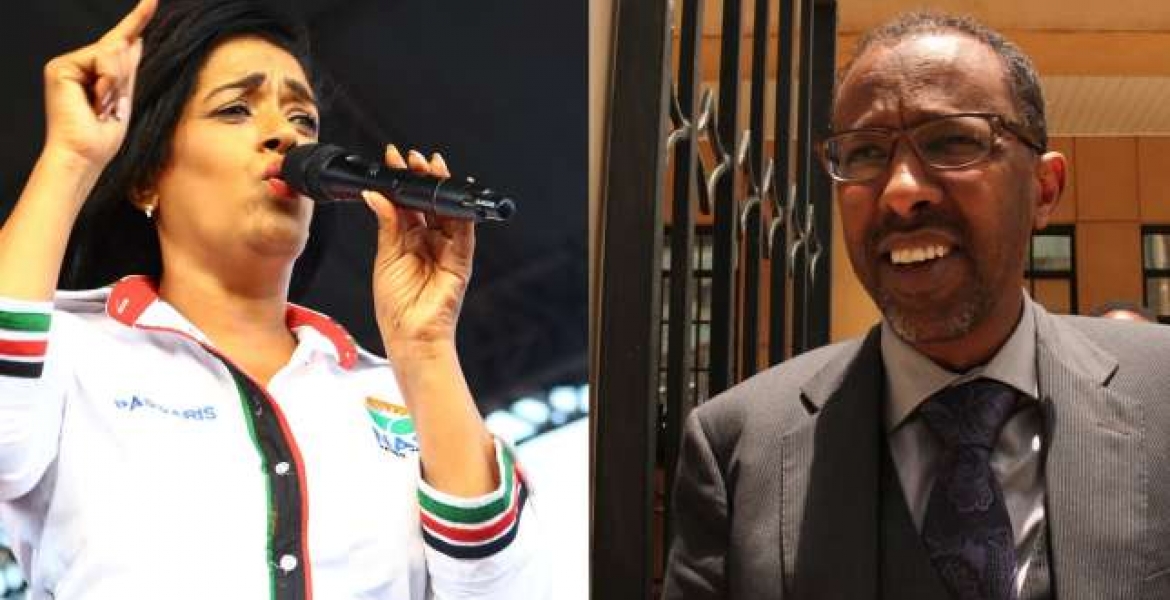 The two traded words over opposition leader Raila Odinga's push for changes to the Constitution, to among other things introduce Prime Minister post and a three-tier system of government.

"On the raging debate on constitutional reforms I am 100% with DP Ruto," Ahmednasir said via Twitter.

"We can't agitate 24 hours non-stop for constitutional reforms simply to improve the future political fortunes of individuals who have perennially failed to win the popular mandate," Ahmednasir said.

However, Ms Passaris was quick to fire back at the lawyer, accusing him of lying during the holy month of Ramadhan.

"Failed to win? Really? A man of your intellect, during the month of Ramadhan, cannot pretend to be oblivious to the fact that our country electoral body did not conduct #FreeFairCredibleElections. It's a fact known by both sides of the divide," she said.

It didn't stop there, Ahmednasir asked the first  time MP to tell Kenyans if she fairly won the Woman Representative seat.  "Yes. During this auspicious month, we are expected to be truthful with ourselves and others," Passaris answered back.

She added: "Any other month I can excuse that which I cannot change but during this Holy Month I can aspire to instil the importance of honest reflection."

The lawyer told Passaris that truth in their religion doesn't matter which month it is and maintained his stand on the push for referendum.

"It is a cardinal religious duty 24 hours. And my tweet is the truth, the whole truth and nothing but the truth. Constitutional amendments to serve temporal and transient needs of individuals are bogus...very bogus," he said.

If we were to get a PM today, s/he would most possibly be elected by Parliament. Would be a Jubilee PM, and we would start another round of changing the constitution. For a change, can we start by identifying the problem areas. May be we can fix without another devisive Orange/Banana referendum.

Passaris needs to shut up and realize electoral period is behind us. The constitution can be amended but only for the good of Kenya. Mischief and trickery will not produce longterm solutions.

Passaris, how double-edged can a person be? Explain how you FAIRLY won YOUR BIT of the elections WHEREAS the ELECTIONS WERE NOT FAIR.

Let us get real, Passaris has nothing to offer other women or girls in Nairobi. She is the real slay queen whom as Miguna said slept her way through the ranks and truth be told, she enjoys the white privilege by family blood. Raila chose her to run in nrb because of her color(again colonial mentality) or may be he was experiencing a delirious moment when Ida was mad at him and his mind was kinda drifting to other avenues. Lighting up Nairobi once upon a time is now an old tale, we need something new.She has not delivered, is an emotional wishwash and should go home in four years.