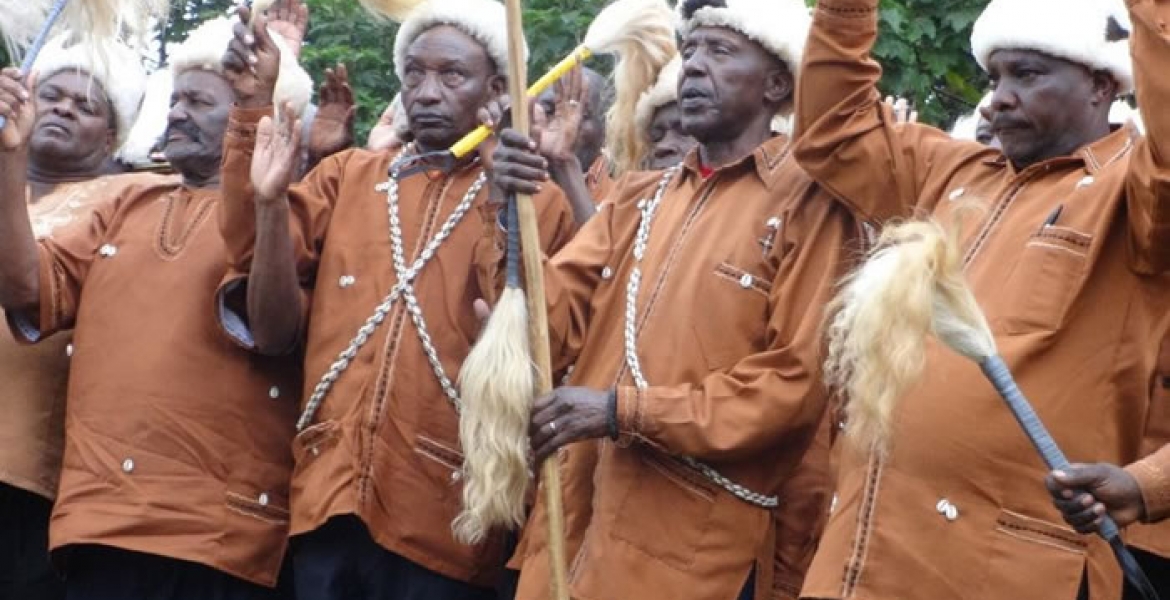 The decision by the leadership of the Presbyterian Church of East Africa (PCEA) to ban a Kikuyu traditional practice has angered members of the community's Council of Elders.

In a statement, PCEA Church said it has banned its followers from taking part in one of Kikuyu community's popular rite known as “Mburi cia Kiama.”

"Mburi cia Kiama" involves slaughtering of goats in fetes where ordinary men from the community are ushered into leadership. During such events, the Kiama (made of elders) offers advice to men on several matters including the Kikuyu culture, marriage and family and community responsibilities.

The ceremony also involve drinking traditional brew known as "Muratina" which the church feels is highly unethical. The Church's leadership arrived at the decision during a general assembly meeting held between April 11th and 14th and was announced in the churches during Sunday services in the weeks that followed.

“The highest body in PCEA church has distanced itself from Mburi Cia Kiama, terming it a negative cultural practice, among other practices like polygamy, female circumcision and witchcraft," read a Facebook post associated with the church as quoted by Daily Nation.

However, Elders drawn from the Community have expressed their discontentment with the  orders by the church, terming them a personal attack. Muthoga Kirethi, who is the chairman of Nyeri Kikuyu Council of Elders, termed the ban as unwarranted and misguided.

“That is unwarranted and misguided. We do not rival the church by embracing our culture. In fact, we were born Kikuyu first before we joined the mainstream churches. People can opt to leave a church but you can never stop being Kikuyu,” said Kirethi.

The church is a John come lately. It has no power over the culture. It has only power over saving of the souls. The Gikuyu and their culture were already there before the white man brought his church to Africa. This is an attempt to place the white man's church as superior to the African cultures and should be rejected. The Church should come out and explain the difference between Muratina and white man's bear. This is unfounded attack on the culture so as to promote their products in self interest. Destroy other people's cultures so as to promote their own. Why not let both cultures compete in a free market and see which one prevails. This attack should be rejected. I thought churches are supposed to accept everyone as they are because we are created in God's image. When did the church become the guardian of a people's culture? This is not new. This is the same way they attacked our languages, only to discover that the white man's language is not superior to ours. Our languages were disparaged in self interest, to make the white man's language superior to ours. This condemnation by the church should be rejected and those preaching such should also be rejected by the community. If they are people of God, let them stick to their book. Let the church itself not pretend to be holier than thou. If it attacks the community, it should be attacked on its ethics and it's practice's.

There is Nothing wrong with Being a Kikuyu; for that is your IDENTITY.

Kipimo ya wine in Holy communion and Mburi cia ciama matters. Just like when driving the amount of alcohol you have in your system decide whether you are going to jail or home

Holy communion symbolizes cannibalism, "eat my body and drink of my blood" but people just so it because they were taught so, until one is awakened "religion will always be the common man's opium"

All Gikuyu's should quit the church. And those who don't quit should not tithe. Upuzi wa Kanisa.

A foreign church has no business telling Africans how to lead their lives. Islam and Christianity are currently the greatest enemies of the Africa. These two alien religions impose their cultural norms among the unsuspecting Africans. They should be banned.

An African who is a Muslim or christian is mentally dead. These two religions are responsible for the decadence that we see in our cultures today. They don't even respect our traditional names. It is not unusual to find a lost African with a name like Paul, Fred, or Fatuma.

These two religions promote crime by arguing that, you can repent after committing crimes against humanity throughout your entire life and then you will be forgiven and then go to heaven!

Only a fool can forego their own culture to follow a white mans culture and bible. Ngai, can't believe this is even a topic in this century. Total nonesense!!! Kikuyu men wamepotea kwa pombe and this ceremony seeks to help them be better men. What could be better than this in any given community? Don't fathers and sons in the West go hunting and fishing together without sanctions? What is wrong about men gathering, drinking muratina, be advised on ways of life? Some of these churches should be outlawed in the country cause they infringe on our own culture, who we are as a people!!! China was right to say NO to this nonesense.

It’s very sad the way Africans blacks we continue to b brainwashed to follow what is white yaani Wazungu way.Before they brot this church around 1897 we had our God ngai witu wakirinyaga we sacrificed goat thenge in the mugumo tree n God mwene nyaga will hear us listen to us n bring eg rain n great harvest n will also wipe diseases from our land but the day we allowed uthungu in us n dropped our culture that the day we went kuku(foolish).I hope the members ya wazee Wa Mburi can use kamemetv/radio/inooro tv/radio/njata tv to tell pure gikuyu to boycott PCEA churches until they give the apologies.

Tangazeni msimamo. You cannot be a Christian at the same time praying facing mt. Kenya. The 2 do not mix. The Hyena pasukadi when it got into a junction and decided to kutembea njia zote. Kudos PCEA

All prayers are based on faith. If you have no faith you cannot do anything. It takes faith for somebody to fly from USA to Kenya. There is no guarantee that you will get to your destination. But you do it by faith whether you are a believer of any religion or not.

Then why don't you walk on water? Or levitate around your house like of the saints are claimed to have done?

How Kikuyu are these 'Kikuyu'? 99.9.percent of those claiming to be 'Kikuyu' today do not have a clue as to what 'Kikuyuism' really entails. Hardly any of these 'Kikuyu' you come across these days can comfortably complete a sentence in Kikuyu,despite the loud proclamations. I am neither an expert nor do I claim a greater knowledge of 'Kikuyuism' a quick perusal of Kenyatta's FACING MOUNT KENYA, and Louise Leakey's 'SOUTHERN KIKUYU BEFORE 1903'might help in understanding how much we have lost our 'Kikuyuism'. I have copies of the original volumes for anyone interested.

How Kikuyu are these 'Kikuyu'? 99.9.percent of those claiming to be 'Kikuyu' today do not have a clue as to what 'Kikuyuism' really entails. Hardly any of these 'Kikuyu' you come across these days can comfortably complete a sentence in Kikuyu,despite the loud proclamations. I am neither an expert nor do I claim a greater knowledge of 'Kikuyuism' a quick perusal of Kenyatta's FACING MOUNT KENYA, and Louise Leakey's 'SOUTHERN KIKUYU BEFORE 1903'might help in understanding how much we have lost our 'Kikuyuism'. I have copies of the original volumes for anyone interested.

I read facing Mt Kenya in the eighties. It fascinated me then. If I read it again, I believe I may find things I don't agree with today. Maybe I will find a copy and immerse myself into it...

Dr Leakey's'SOUTHERN KIKUYU BEFORE 1903 is more detailed and thoroughly fascinating. It comprises three volumes and 1200 pages of narrative by kikuyu elders who were adult before the first European ventured into kikuyu land and were still living at the time the manuscript was prepared in the early 30s.

Thanks for that. Wonder if I can find it in a university library. Will check my local university.

Wish you luck in finding it. It is very rare, I acquired my copies from Germany at a cost of 800 euro.

advise how to get this book by louise leakey

The church is white man's business that takes place once a week on Sundays. Gikuyu culture is part and parcel of every Gikuyu's everyday life. It is not something that is attended to on a single day, it is in every aspect of our life. Culture cannot be separated from who we are. The churches should relocate to where culture fits their standards and ethics and where they have power to condemn and make judgement. Judgement is left to God not man.

I am trying to learn as much about our culture and traditions as possible. Do you by any chance have PDF copies of these books?

Who is on the Lord's side?
Good PCEA
Thank you for your stand.
Our children and community are being made drunkards in the name of dowry.
Stand firm and save us.
What you may advocate to Christians is as they take care of church so should the Christians take care of their PARENTS.

Am perplexed by the edict of PCEA leadership on "Mbûri cia Kîama" a harmless cultural practice. I've been into countless such ceremonies and participants are implored to be moral and ethical....respect your neighbor and his property...conduct yourself with respect, work hard, drink in moderation, take good care of your family, be honest etc.
Why would PCEA find this offending?
My take.... PCEA is angry that elders are beginning to assert themselves and playing their role in society. e.g. PCEA used to mint millions by organizing boys circumcision events. Kikuyu Elders are now doing it denying PCEA the easy money

Ain't no way we are giving up on mburi cia kiama. If you dont feel nyumba ya mumbi, umagara!
We were brought up with the culture, never saw or heard of FGM in the festival so stop the bs!