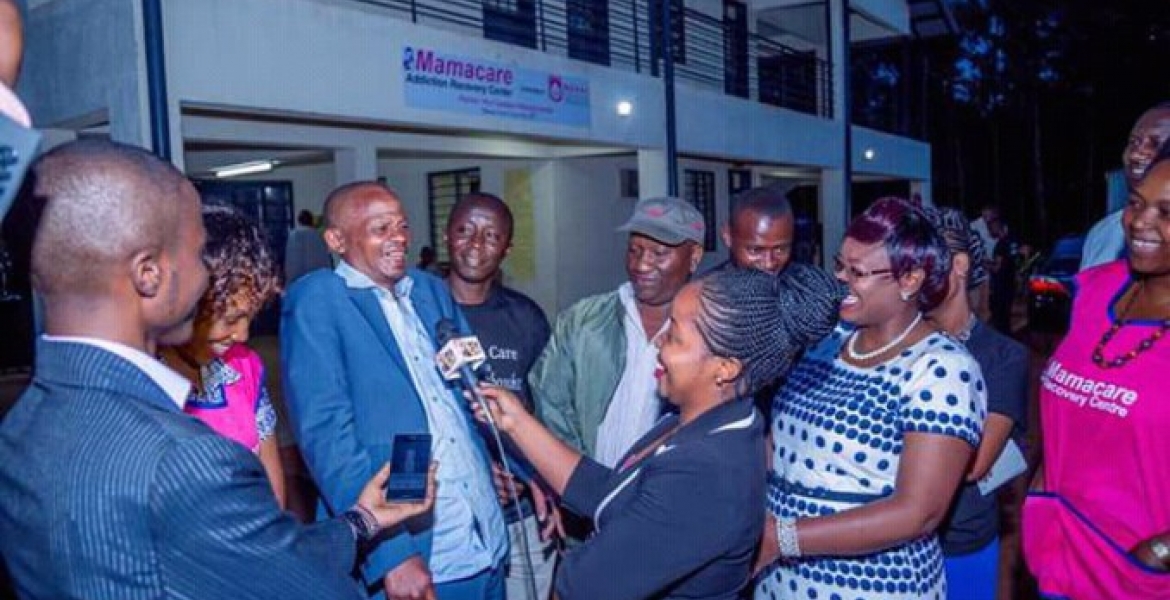 Martin Kamotho Njenga alias ‘Githeri man’ has been admitted to a rehab facility in Kiambu County.

When President Kenyatta toured Eastlands area on Wednesday to issue 50,000 title deeds to residents, Kamotho, through the President's handlers, asked Uhuru to intervene and help him stop his penchant for alcohol.

On Friday, Kiambu Woman Representative Gathoni Wamuchomba said she was called from State House and was instructed to trace Kamotho and take him to an addiction and recovery centre.

“Yesterday I received instructions from State House to ensure that I find the whereabouts of Githeriman and admit him to our rehab Mamacare addiction and recovery centre after he contacted the President through his team at Jacaranda grounds narrating his addiction to alcohol and desire to find a new lease of life,” Wamuchomba said.

She then launched a search for Kamotho and eventually found him in Nairobi's Kayole estate, where he lives. The first time MP drove him to Mamacare Addiction and Recovery Centre in Kiambu, which she founded to help reform drug and alcohol addicts like Kamotho.

“Without any resistance, he made up his mind to join us at Mamacare Addiction and Recovery Centre for the next three months.”

“I thank HE (His Excellency) the President for taking interest in such a humble man and finding a solution,” she said. “I hope his stay at the rehab will give him a chance to gain sobriety and rediscover his purpose in life.”

Kamotho became an overnight celebrity during August 8th,2017 elections after he was captured on the voting queue eating githeri from a plastic bag.

Leading corporations such as Safaricom and fashion design firms then moved in fast to use his new found status to market their products. He received gifts such as clothing, phones and cash.

His life status changed from a casual worker with the Nairobi County government to one of the most sought after celebrities in the country at that time.

The problem with free stuff. He was not mentally ready for that kind of money and status. All he could think of all that cash is to drink alcohol. Better when he was a casual worker. That is why many people who win lottery after a couple of years end up being broke.

Are we so starved for celebrities that we make one out of mundane activities? Githeri man is nothing special.I guess we are so disgusted with the arrogance of our so called current celebrities that we find solace in a humble Githeri chomping man...
Thirty years ago Githeri man would not have warranted even one line in the dailies,let alot apicture or attention from HE.Wake up Kenya.
This is making a mountain out of a molehill.

This man is a Drop in a Bucket of Acoholics in Kenya. Get serious! for Every Addicted Kenyan (especially for the Willing souls).

I think even tribalism can be described as addiction which is worse than foolishness.Or how can you describe Kenyans who elect murderers like muuaji Raila who breaths and smells blood that he cannot stop his hobby of eliminating humans?He killed 350 Jaluos,his tribesmen after his targets,the Gikuyu swore to defend themselves during the last elections.Others addicted to tribalism defend their tribal gods with the believe that their tribe is represented in looting.

I commend Githeri man for having the courage to admit that his drinking is a problem. Addiction is a disease and does not discriminate who is who in the society but implications are similar especially on the immediate family. I hope those inflicted by this disease, both men and women will have the courage to change their attitude and do something about it, thanks again to Githeriman for shedding light on this.

Corruption in motion! He jumped the queue just coz the president "instructed". What about the street boys who medicate with glue, etc... who gives them a hike? The hypocrisy is overwhelming.