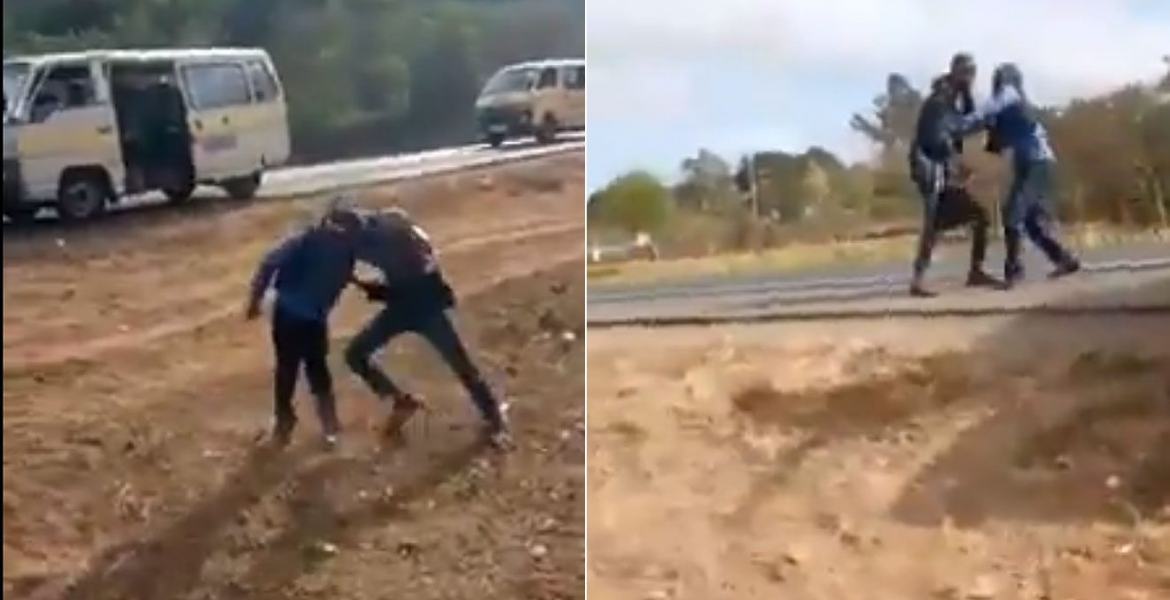 The National Transport and Safety Authority (NTSA) has launched a search for a matatu driver filmed beating up a passenger using a metal rod.

In the video that has widely been shared on social media, the driver of a matatu registration number KAK 251C is captured exchanging blows with a male passenger after a confrontation.

Later, the overpowered driver rushes to the vehicle to pick a metal bar that he uses to clobber the passenger, leaving him with serious injuries.

During the fight, the driver is heard claiming that the commuter attacked him for no reason and he was forced to retaliate.

Hey @DCI_Kenya this is a matatu driver assaulting a passenger with a metal rod on Kangundo road. The plate number is KAK 251C @NPSOfficial_KE @ODPP_KE pic.twitter.com/KQQHtJzIob

The incident was reportedly videotaped along Kangundo Road on Monday.

Kenyans online have urged the Directorate of Criminal Investigations (DCI) and the National Transport and Safety Authority (NTSA) to move swiftly and arrest the driver.

NTSA has released a statement promising to take action against the PSV driver.

“Our attention has been brought on the video which was circulated on social media sites yesterday of a driver attacking a passenger, the action taken by the driver is unacceptable, we are pursuing the matter and update on the action taken #SpeakOut on rogue behaviors on our roads,” NTSA says in a tweet.

Kweli nyakati zimebadilika. Growing up in the city estates (& even shags, I presume), you had to be part of a gang of friends (for lack of a better term) so as to be secure. Attacking one was an attack on all and you’d be hunted & punished. Not cool but it kept the peace in most times.
Someone coming at me with a metal rod is courting disaster because there are rocks all over, hata survive. Moreover, those of my age know well how we used to carry dangerous metal knuckle braces & knives for self defense. I still carry braces (+ pepper spray) in the city. Our generation learnt to fight to stay alive & everyone knew their place. This skill set has stayed with some of us coz there’s no way huyu jamaa wa chuma angekosa kufika ICU if I was the one he attacked. You don’t need to bother the police or NTSA sometimes

Violence is in black mans' DNA, I watched the clip looks clear the driver was overpowered and he defended himself excessively .if he left key on ignition with engine running ,one of the passengers was supposed to drive off the bus to the nearest police station leaving behind the fighters in the middle of nowhere or just proceed to the destination.

I feel for this passenger who is nursing serious injuries from this Matatu driver. I believe this passenger was badly wronged to end up in a fight with the driver. Recently I was in a Matatu and I told the driver very early in my trip where I was going to alight. I kept on reminding him and when we got to my stage he refused to alight me and decided to take me very far away and was not to refund me money to take another Matatu back. I felt very disappointed with that driver. We all know how rude they are with their conductors if you try to challenge them.

Surely Kenyans need to help each other! How do people just stand by and witnesss someone being assisted? Exactly why people get robbed coz even the thugs in Nairobi know people would rather watch than help. Sad